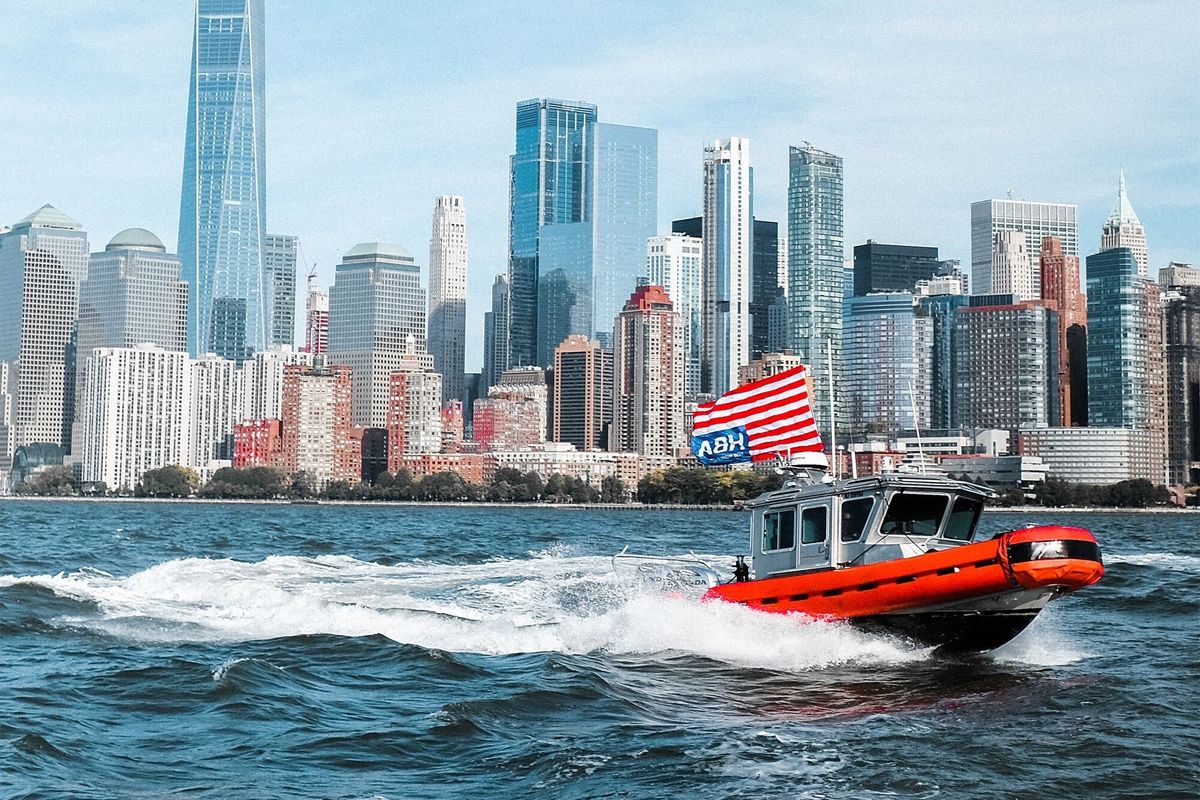 Despite what we're told, the American flag has never represented freedom for Black people. For many it has become a tangible symbol of the white supremacy, hate and intolerance that has always been prevalent in our country. So leave it to America's most unlikely luxury designer to flip the symbolism on its head, flying the flag upside down amidst the backdrop of two pandemics — racism and COVID-19. But are we finally ready to listen to what Hood By Air has to say?

Shayne Oliver and Raul Lopez created HBA in 2006, vowing to make sure the voice of the culture was heard. Oliver took a three-year break and got right back to work, casting real people in his shows, elevating new silhouettes and controlling distribution long before legacy luxury fashion houses would even think to do so. He deconstructed street wear, creating a high-low aesthetic (that now seems commonplace thanks to Demna Gvasalia and Vetements) collecting fans like Rihanna, A$AP Rocky and Kanye West in the process. But in 2017, after two shows in Europe and a chillingly realistic recreation of HBA's Spring 2016 show in the window at Barneys, Oliver announced his label was going on hiatus while he created a special collection with Helmut Lang. Nearly three years later, Oliver is back and ready to tackle this shit — quite literally.

In July, Oliver announced HBA was relaunching with four different components: Hood By Air, which will set the theme each year with an event or activation; HBA, that will release product drops that coincide with the theme; Museum, the brand's archives that will be "re-interpreted by designers-in residence" for future collections; and finally, Anonymous Club, HBA's platform for emerging artists who may have the option to create and collaborate in-house. Oliver's first offering in three years was a limited-edition T-shirt with proceeds benefiting the Black Trans Femmes in the Arts, Emergency Release Fund and Gays & Lesbians Living In A Transgender Society released in July. The front of the shirt reads "New World Citizen" and "Black Owned," while the back says "Shitshow," with a nod to the brand's earlier days with "Elite Urban Brigade."

HBA's relaunch could not have come at a better time. "It wasn't planned to hit the nail right on the head," HBA graphic designer Christian Velasquez tells PAPER. "We are in this time where the world we're living in is changing. There are a lot of the political issues, and racial tension being brought to the forefront in a way that it never has been before. And we're 100% aware of that as a brand that is Black-owned who is also having conversation with the queer community. We're optimistic in the face of all of this change."

It's easy to be optimistic when the change the rest of the world is scrambling to embrace is embedded in the company's DNA. "And I think that's what we're excited about." Velasquez says. "The translation of the brand will come across in a much more powerful and respected way than I think it was before, in the past, because these conversations are being had in the consciousness of American business people and just people in the world today in general. I think we don't need to say much other than just keep doing what it is that we were doing."

"This is our world and our state of America and our point-of-view."

"We've been doing this campaign that we're calling 'Shitshow' and it's more tied into all of the politics that are going on at the moment," Velasquez adds. "The state of the world as we know it right now is pretty insane but I think the way that we like to talk about things is, of course, a little tongue and cheek, but with all respect, naming the campaign 'Shitshow' just made the most sense." The flag HBA designed for PAPER is an extension of this joke. "The flag is upside down because HBA is playing with that inversion within the vernacular of like HBA," Velasquez said. "Like that's how we treat things when we're talking about things in our world. This is our world and our state of America and our point-of-view."

Oliver's point-of-view has always been light years ahead of the mainstream fashion industry, and to see the way streetwear has been legitimized in his absence is the biggest indicator of that. Oliver and his collective laid the blueprint for the modern luxury designer. Demna Gvasalia is now at Balenciaga, Virgil Abloh is designing menswear for Louis Vuitton and Kerby Jean-Raymond was just announced as Reebok's new global creative director. Each of them followed a blueprint that Oliver laid out. Fashion was always political because Oliver's existence is political. He redefined what luxury looks like, what it feels like and the way it's marketed. "The systems you are trying to interact with in new ways are so defensive," Oliver told Business of Fashion, of feeling misunderstood by American retailers.

"We're excited to keep going because I don't think we have to say much in order to be political," Velasquez says. "I think the idea of Hood By Air is that we are a group of radical people and radical thinkers, people of color, queer people. We're living a life pretty much marginalized at one point or another, whether or not some of us are famous or some of us aren't and some of us are artists or whatever, but we're all experienced with marginalized experience and through that, make things that depict that."

Being a marginalized designer has helped Oliver get clear on his bottom line. "Luxury to HBA is still defined as our top priority attitude," Oliver tells PAPER. "Whether that's executed through apparel, music or film. We still believe in the fact that culture as a whole is considered luxury." He is protecting his idea of luxury this time around with his museum conception. And he is better suited to protect his ideas and intellectual property within the company. "We develop and store our ideas in our museum, which is our own library we've created throughout the years," Oliver says. "Then, we decide what's the best strategy for execution."

"We still believe in the fact that culture as a whole is considered luxury."

And yet, Oliver's story is what we hope for when we say we believe in an American Dream. He is the dream. He is not a trained designer and he didn't launch HBA with financial backing. But he understands his cultural cache. It's the reason brands like Helmut Lang, Longchamp, and Diesel bring him into their studio. Culture is the one currency that America has tried to wipe away from the people that built this country, and it's the only thing that persists. Barneys went out of business because it couldn't keep up with the cultural shift. American retailers struggle to understand the demand for luxury in a language they do not speak. But Oliver continues to reinvent a new world where we can dream freely — and he flies his flag proudly.

"It is our duty and responsibility to support them by developing them to be the next greatest creatives of our time," he says. "This opens up clarity and a fresh start for anyone who follows HBA, The New World Citizen."