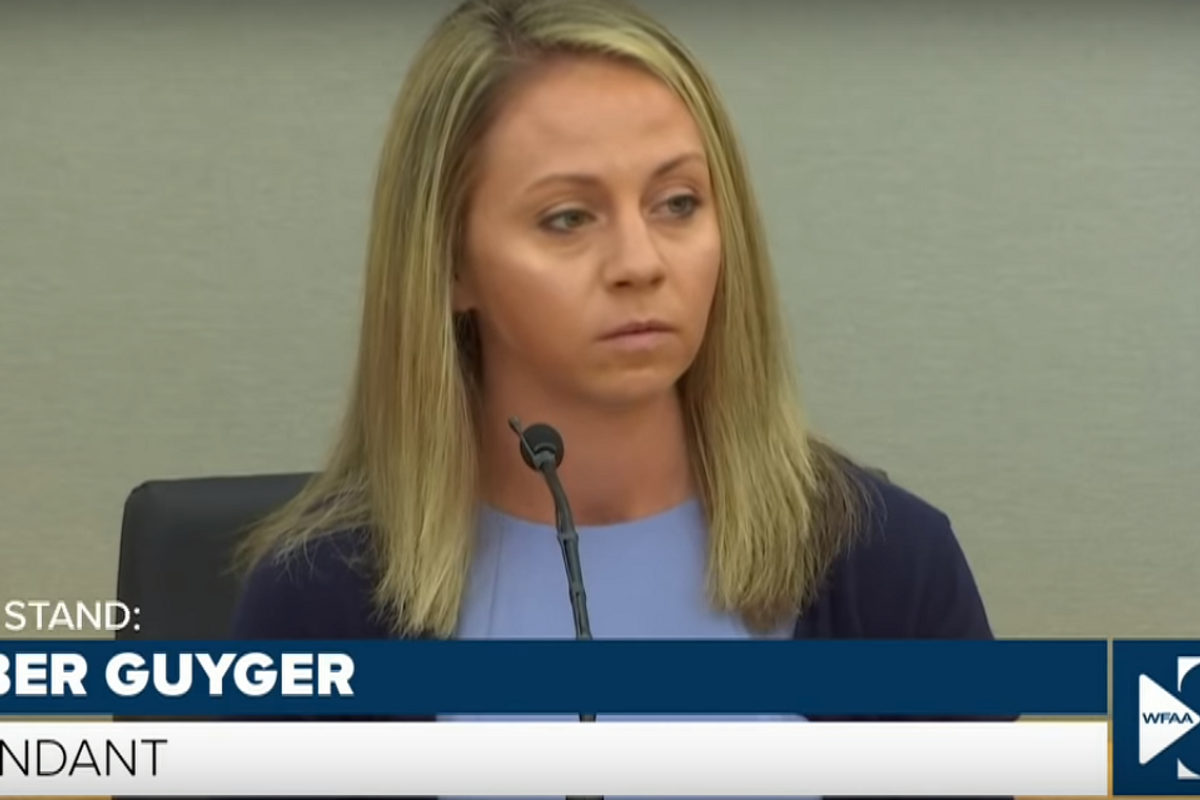 Update: Amber Guyger, the Ex-Cop Who Killed Her Black Neighbor, Sentenced to 10 Years

Following a weeklong trial, former police officer Amber Guyger, who, last year, entered the wrong apartment and shot and killed the resident, Botham Jean, was found guilty of murder. She faces sentencing this week, and is looking at serving anywhere between five and 99 years in prison.

It's a case that's held national attention, one of the many incidences where the Black community and the country has waited to see if a police officer would (finally) be held accountable by law for killing a Black person. Guyger's initial charge of manslaughter, a charge lesser than murder, and delayed arrest after she killed Jean in his apartment, sparked protests and worry that once again, there would be no accountability.

Guyger testified that she fired her weapon in self-defense and accidentally took Jean for an intruder. She had returned home late, parked on the wrong level, and walked into the apartment above, believing it was hers. Upon realizing the door was unlocked, she became worried, and shot Jean, who was eating ice cream in his living room.

Dallas assistant district attorney, Jason Fine, refuted her defense, stating that, "It's not a mistake. It's a series of unreasonable decisions. Nobody had to die. She caused his death. She acted unreasonably." Prosecutors highlighted Guyger's social media activity and her past racist remarks, including texts while she was working at a parade in honor of Rev. Dr. Martin Luther King, Jr.

Jean's family gave statements in court as well. Allison Jean, his mother, spoke in court and sketched a picture of who Botham Jean was, a 26-year-old loving son and brother who was 'the glue' that tied her three children together. She also spoke to the effect of his death on the family.

The jury, electing not to take the controversial "castle doctrine" offered by the judge that would clear Guyger of any charges, found her guilty. The "castle doctrine" allows for homeowners to use lethal force in their home, and was widely decried for being an option under consideration for the Guyger case.

Guyger's case follows a long period of tension between the police and minority community in Dallas, a diverse city with a population of 42 percent Hispanic, 29 percent non-Hispanic white and 24 percent Black residents.

In a 2015 study, it was found that Texas, and in the suburbs surrounding Dallas, law enforcement tends to be disproportionately white, and "doesn't look much different than it did before the Civil Rights Movement." Last year, a police officer was sentenced to 15 years for killing 15-year-old Jordan Edwards, after he fired at a car of teens that he believed was driving aggressively toward his partner. An off-duty officer was sentenced to 10 years in 2016 for chasing and killing 16-year-old Jose Cruz, upon discovering he was attempting to break into his SUV. These are all Texas cases demonstrating a history of police force against people of color resulting in death actually yielding some kind of justice.

But as NBC News points out, Amber Guyger's guilty verdict was "a relief, and proof that Black Lives Matter had an impact." Names such Michael Brown, Eric Garner, Tamir Rice or Philando Castile, have become synonymous with the movement, perhaps moreso because in each case, justice did not prevail. Guyger's guilty verdict suggests that the American understanding of policing and self-defense is shifting. Black Lives Matter, indeed, as does the work of activists highlighting ongoing racial disparities such as these.

UPDATE 10/02/19: Following hours of jury deliberation, Guyger was sentenced to 10 years in prison for the murder of Botham Jean, according to The Daily Beast. She will reportedly be eligible for parole in five years. During his victim impact statement, Jean's younger brother, Brandt addressed Guyger directly, and asked permission from the court to hug her. "I'm not going to say I hope you rot and die just like my brother did," he said. "I personally want the best for you."