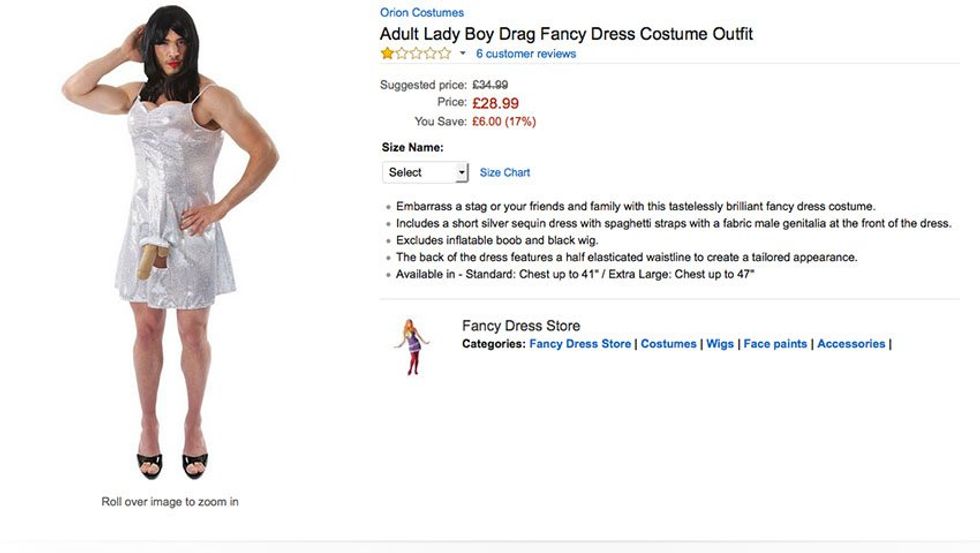 Amazon's Under Fire For Their "Lady Boy" Halloween Costume

By Sandra Song
PAPERMAG
screenshot from October 20, 4:15 p.m. EST
Amazon's in some (rightfully) hot water for selling a shitty "Lady Boy" Halloween costume this year -- a costume that is still available on the retailer's website. And, as if that wasn't bad enough, there's also some dodgy stuff surrounding the tone-deaf snafu as well.
Manufactured by one Orion Costumes, the sequin dress + fake penis combo is being billed as being "tastefully brilliant" -- though according to the Daily Mail, not everyone reviewing the product thought so.
What's super weird though is that the costume actually had a one-star rating yesterday -- something that's now been completely erased from the page. And as if that wasn't fucked up enough, apparently The Gay Star News reached out to Amazon earlier who allegedly responded that "'all [Amazon] Marketplace sellers must follow our selling guidelines and those who don't will be subject to action including potential removal of their account....The product in question is no longer available'" -- which is, uh, not true.
screenshot via The Gay Star News / dated October 19
Either way, we're hoping to get an explanation (and prompt take-down of the offensive costume) sometime soon. Till then, keep contacting Amazon customer support.
[h/t Daily Mail]
You May Also Like
Beauty