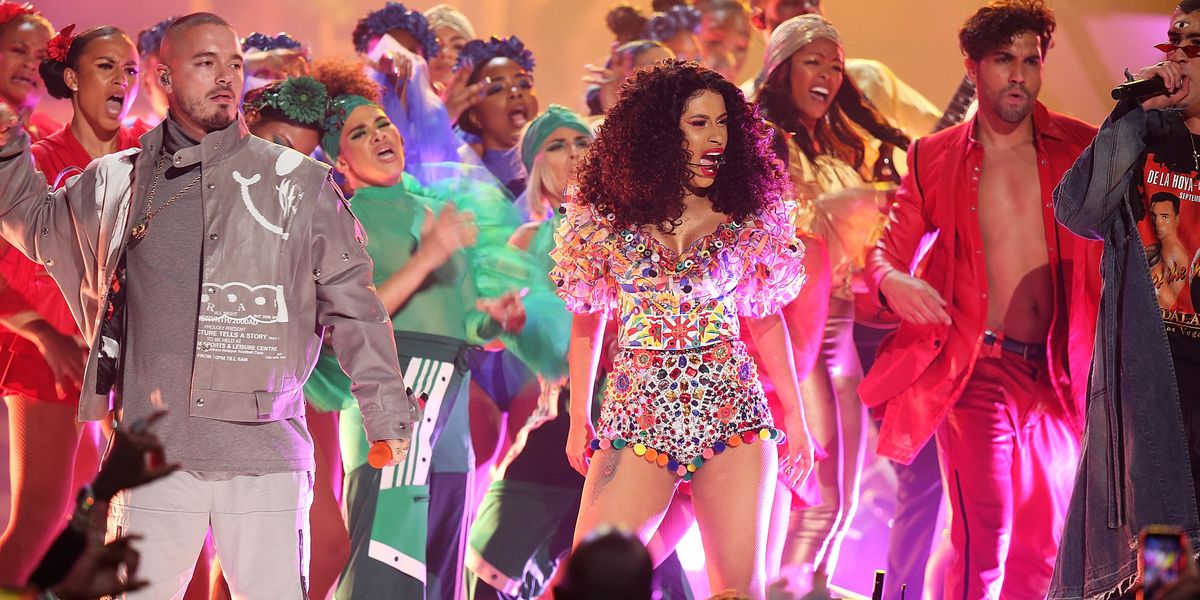 The 5 Greatest Moments of the 2018 American Music Awards

It was, in many ways, a victory for women in music.

While social media is ablaze with commentary over the strange and heated feud between Lana Del Rey and Azealia Banks, there was also a big awards show in Los Angeles last night: The American Music Awards, in fact! Anyway, ICYMI, among all the star-studded performances and surprise moments, the ceremony was a big night for some of music's biggest women acts to really shine. The night included performances from Jennifer Lopez, Mariah Carey, Halsey, Ella Mai, Dua Lipa, Camila Cabello, Carrie Underwood, and those mentioned here. Here are our top five can't-miss moments from the AMAs.

Hot on the campaign trail is the newly political Taylor Swift, whose star power and "coming out" post from the abyss of years-long seeming apoliticism has reportedly encouraged more people to register to vote than the entire month of August.

By all appearances, Swift seems to be making the most of her mantle. First, she opened the show by gracing the AMAs stage — her first awards-show performance in three years — to sing rebellious Reputation standout, "I Did Something Bad," and, much to fans' chagrin, was bleeped (gasp) when she sang the song's opening lyrics, "If a man talk shit, then I owe him nothing." (Strangely on-the-nose considering that it seems we're in an age of increasingly more regular female censorship).

The singer, who won four awards, including for her well-received Reputation Tour, her aforementioned 2017 album, and Artist of the Year, used her acceptance speech to encourage viewers to vote in the midterms, saying: "This award and every single award given out tonight were voted on by the people, and you know what else is voted on by the people?" It is the midterm elections on November 6. Get out and vote. I love you guys."

Tracee Ellis Ross returned to her hosting duties this year, and it was anyone's guess if she would wear as many outfits this year as she did last. But ever the glamazon full of surprises, Ross did not disappoint, turning out an array of bold, statement-driven looks on the red carpet and throughout the show, all by Black designers, thank you very much. Here. For. All. Of. It. Pyer Moss by Kerby Jean-Raymond, Dapper Dan's Gucci team-up, CD Greene, Shanel Campbell, Virgil Abloh, Sergio Hudson, LaviebyCK, Olivier Rousteing for Balmain, recent Parsons graduate Dèshon, and Cushnie. It was a lot in the best way possible, but honestly, there's always more.

I’ve featured black designers in all of my @AMAs press looks, and will do the same for all my show looks tonight! S… https://t.co/oDCdcqmoCY
— Tracee Ellis Ross (@Tracee Ellis Ross)1539121983.0

Did we mention that she did began the reign of Black Excellence with a spirited dance medley that included Cardi B's ubiquitous "Bodak Yellow" — for which she donned a diamond studded grill spelling out her initials; "This Is America" by Childish Gambino; "Apeshit" by the Carters; "Respect" by Aretha Franklin; and "Uptown Funk" by Mark Ronson featuring Bruno Mars.

Ciara performed new singles "Level Up" and "Dose" live for the first time, and saw it only fitting to bring "Lose Control" collaborator and legend Missy Elliott to the stage. Vinyl-clad all-female dancers. Missy saying "y'all can't sit with us." Ciara in angelic white. Why not? And if Missy's gonna be there, you know she had to bring her "Funky White Sister" with her (who watched from the audience). Again: a lot.

In Cardi's first awards-show performance since giving birth to Kulture, she made "I Like It" come alive, alongside the song's featured artists, J Balvin and Bad Bunny. And Cardi wouldn't be Cardi if she didn't do it with style, wearing a Dolce & Gabbana dress on the red carpet and on stage after winning Favorite Rap/Hip-Hop Artist, and this colorful, ruffled number (that became a leotard!) for the highly choreographed performance, which included bikes. Of course!

Aretha Franklin Gets the Tribute She Deserves

The tribute closed the show, which was probably the most appropriate end to a show filled with the unforgettable example that women in music (especially women of color) across representational categories, have always been our present and will certainly carry the torch into our future, if only the industry at large would catch up.