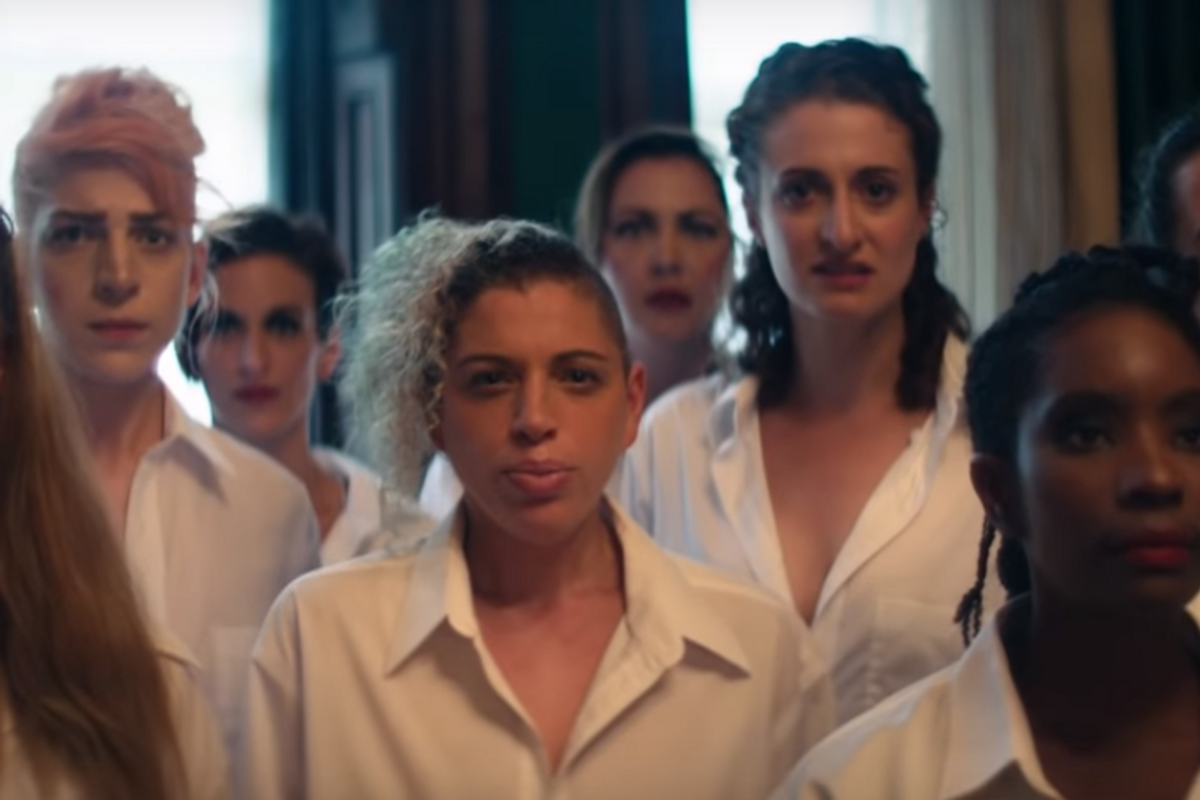 "Don't you dare forget that I'm the one writing this."

Amanda Palmer and London-based singer-songwriter Jasmine Power have teamed up for an intense and graphic video for new song "Mr. Weinstein Will See You Now."

​The video arrives one year after #MeToo, the solidarity movement surrounding countless emerging sexual assault stories in light of detailed accusations against Harvey Weinstein (who has pled not guilty), Bill Cosby (recently convicted), and still other prominent male figures who've yet to be charged. As such, Palmer and Power, in collaboration with the video's director and choreographer Noémie Lafrance, replicated a site where many of Weinstein's own alleged violations were said to have taken place: a hotel room, full of women dressed in oversized men's shirts.

This striking visual reference, it is worth noting, may or may not be a commentary on the alleged culpability of women who worked for Weinstein, a group of purported enablers commonly referred to as the "honeypot." The suggestion therein has reportedly been that through fear tactics and abuse of power, Weinstein manipulated women who worked for him to lure other women victims to private spaces. (This, of course, only further illuminates the dominant issues surrounding men in power and the lengths they'll often go to remain protected, especially if it means doing so at other women's expense.)

The song itself is a stirring piano ballad that features powerful lyrics addressing—both directly and indirectly—the violence of being violated. "You came here dressed for battle, you knew damn well," Palmer sings in the song's opening notes. Here, "you" effectively becomes a direct challenge toward the song's climactic end, a voice of defiance, "Don't you dare forget that I'm the one writing this," is blended with one of denial: "This never happened."

Jasmine Power said of the video:

As we directed the chorus members through our song chorus, I felt this overwhelming emotion come over me as I gazed into the eyes of each and every woman singing along. There were moments while watching the monitors where I felt shudders of pain and sparks of excitement run through my entire body. The day felt powerful, dark, fearless and then light when I would respond to a grateful smile of another woman on set, as she would say, "Thank you for writing this." I hope my children will watch this video one day and be relieved that times have changed.

We rented the space from an Episcopalian church—which felt poetic to me, having been raised as a little choir girl in that lineage. We were worried for a minute that the minister—who was a woman—was about to shut down the production, because she was looking at our outdoor warmup from across the street and looking concerned. Then she came over to the set, watched what we were filming, and asked if we would please come back to screen the finished video for all the women of her congregation. Women are rising up, everywhere. Change is happening at every level.

All proceeds for "Mr. Weinstein Will See You Now," which is available on Bandcamp, go to the Time's Up Now legal defense fund.