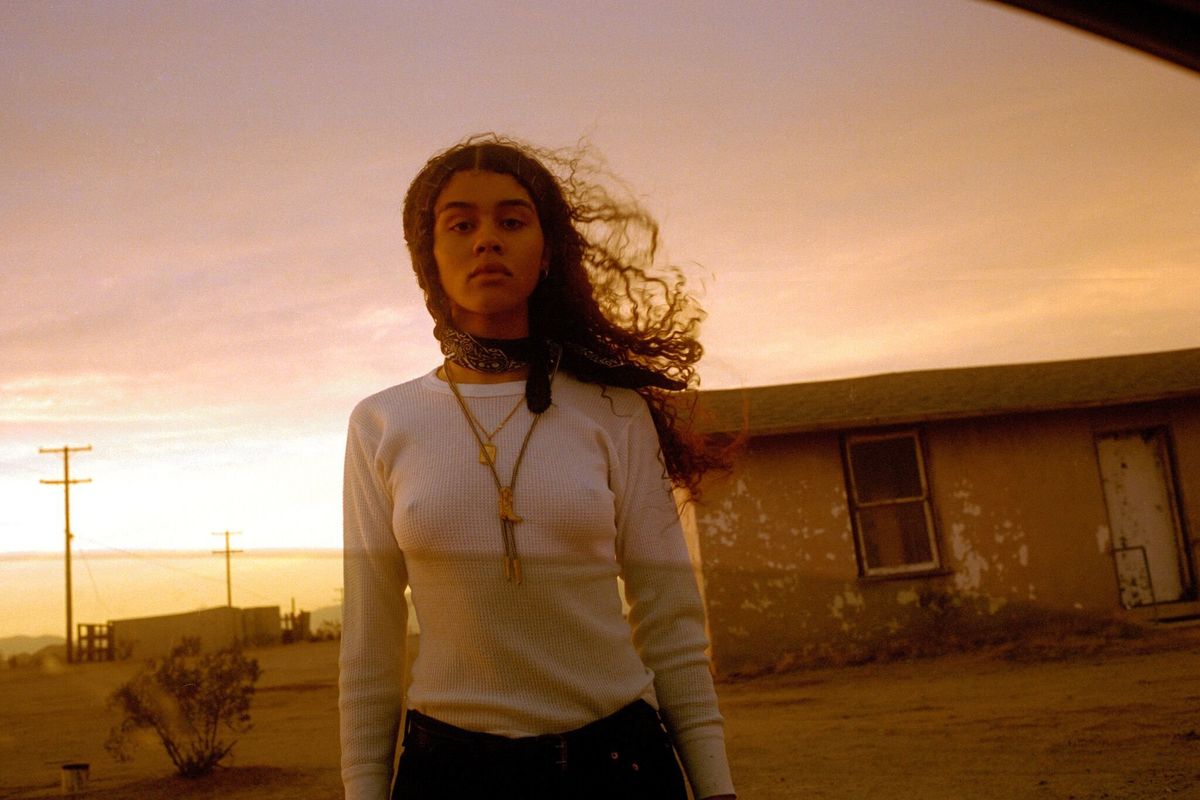 Ama Lou Can Do It All

19-year-old London R&B singer Ama Lou is just getting started. After releasing a politically-charged single, "TBC," in 2016, she dropped her debut EP DDD last month, an intricate work that foregrounds the folds of her vacillating, longing-tinged vocals over a hypnotic web of synth and drums.

She is a classically-trained musician, but has previously listed a wide array of influences including Ella Fitzgerald, Justin Bieber, Gil Scott-Heron, and Hannah Montana. Even in a relatively short three-song project, her eclectic taste is evident. "Tried Up" is slow-burning and smoldering, while the beat in "Wrong Lessons" jitters ecstatic.

Lou writes and produces all her music and creates her visuals with her sister, Mahalia. DDD gets its name from the triptych of music videos that accompany the music. One was filmed at dawn, the second during the day, and the third at dusk.

Lou is now touring with electronic-R&B queen Jorja Smith, a pairing that's sure to keep audiences buzzing. We caught up with Ama Lou to talk about her musical background, getting a start so early, and creating a visual language.

You're classically trained as a singer. How do you feel formal training has impacted the way you approach music-making today?

It set me up to have a really good structure and understanding of the bases of music and also made realize how easy I have it! Classical forms of music are not easy man. They require so much brain power when learning them and orchestrating. I had to learn a lot during classical training, things that as a 13-year-old that had only been writing and singing contemporarily for 2 years, I wasn't so accustomed to! It requires a lot of mental and physical exercise that I am extremely grateful to have gone through.

How do you think your songwriting has developed since you first began writing at age 11? What sort of topics do you find yourself writing about today?

Naturally, I don't feel I have gotten better because of time. My writing is evolving because of experience and increased consciousness which I guess has something to do with linear time. Anything and everything — the songs topic pick me in totality, usually.

DDD is a very focused project, with only three tracks. How many songs did you have to write to get it down to just three?

I only wrote those three.

The package is focused sonically — what was the process for developing your sound like?

DDD was the first project where I had the resources around me to be totally free and play out exactly what I heard in my head. I realized my place as my own sound producer, I had all the answers for my own blanks. I was able to work with amazing session musicians and producers and be really specific and extremely pedantic about what I was hearing.

Ama WHO? on Instagram: “Send it forward, I got you.”

How did you land on this concept of Dawn, Day and Dusk? How does it play out in these songs thematically?
I don't remember how the concept of DDD came about. I remember googling "DDD" ages ago to see if any projects had been released under that acronym. I started to visualize the treatment for the film just as concepts for a story and themes that ran through these scenes that I was seeing and it kind of evolved from there. I then started developing the production of the songs sonically along with the story much like a score.

Do you consider yourself a visual artist, as well? Describe your visual language.

Yes, I visualize films the same way I do music. Sometimes I see the music in my mind and I have to describe how it sounds sonically. I am completely obsessed with film.

You're touring with Jorja Smith. Do you look up to her as an artist? Who else inspires you?
My sister gets that spot man, she is such a good support system for my intense space. Everyone that is close to me, in my team and otherwise inspires me though; because of their belief in Ama Lou and trust in the bigger picture. Their belief in a vision that is greater than who I am. When I see someone have some sort of intrinsic love for me and what I'm doing, that's inspiring.