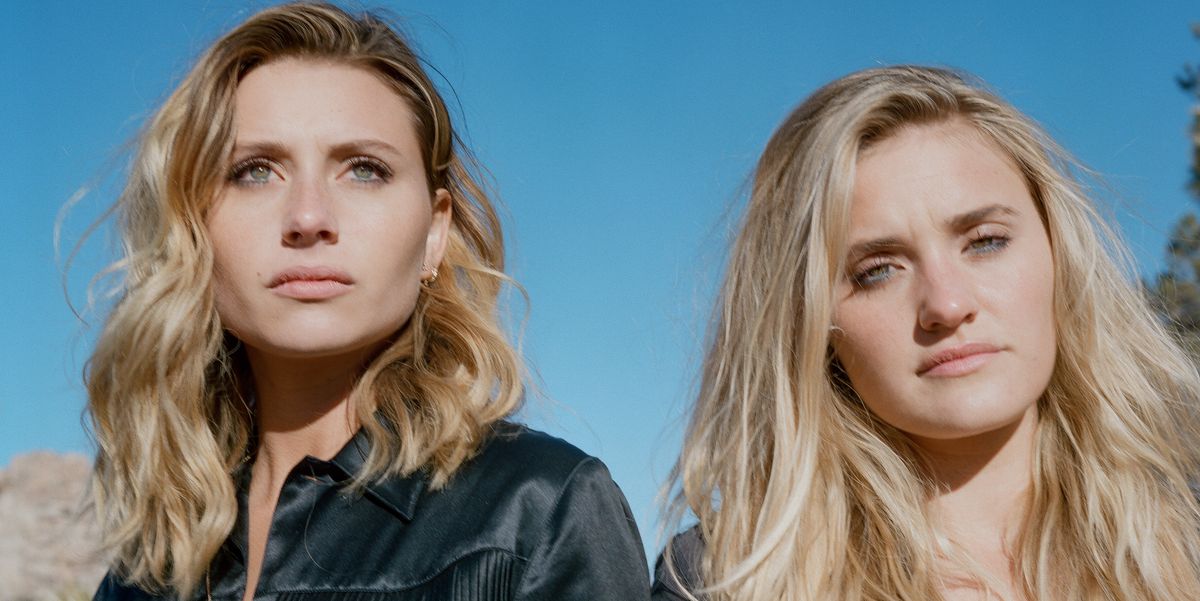 Aly & AJ Talk Their Decade-Long Break, Songs That Stick, and Being Disney Darlings

It's no secret that Disney has bred some of the biggest musicians in the business: Britney Spears, Miley Cyrus, Demi Lovato, Selena Gomez...the list goes on. Back in 2007, sister act Aly and AJ Michalka were both actors in the Disney Channel machine, but also made waves with their breakout album Insomniatic. You were likely in an emo phase as a tween or teen relating to the hypnotic "Potential Breakup Song" (and it's probably stuck with you). After a decade-long break from releasing new tunes, Aly & AJ have come back to music on their own terms, shifting their sound and adding more mature perspective on life. (It's been a decade, so it's to be expected.) The duo released their newest single in late August, "Take Me," an electropop rallying cry to meet your crush in person instead of being consumed by dating app chat.

We caught up with the sisters to talk about their decade-long break, taking a DIY approach to the new album, and what Disney gave them.

What brought you guys back together to make music?

AJ: For Aly and I, it's been a long time: it's been 10 years since we released a full-length studio record. We got signed so young that we wanted to really focus on acting and not on music. We were really happy with what we were listening to, but we weren't really happy with what music we were making. Aly and I started writing again a few years ago. It's something we needed to get back into; it's something we're passionate about, and it's our first love. We decided to not write for radio, not write for a label, not write for anyone but ourselves. That's kind of led us to now. I wouldn't say it was 10 years of us not wanting to write, but a large chunk of that was focused on other things. Aly and I reconnected with a mentor of ours, Mike Elizondo and asked him to A&R and oversee the record. He brought together a really great group of writers we started working with, and from there, Aly and I started writing really great material that we were really proud of. I haven't been able to say that in a really long time.

Aly: I agree with AJ. It was one of those things where we worked so hard when we were under the label that it was nice to be able to make a record without pressure and expectations. Because we didn't have any expectations, we ended up creating music we've never been more proud of, honestly.

Do you feel like you have the same fan base you did?

Aly: I think it's a mix. I think we'll gain new fans with this music because it's different than past music we released. But I also think the fans that fell in love with our music at a young age are older and have followed us throughout our career. Hopefully we'll gain new fans that never thought they'd listen to an Aly & AJ record, but because they like the music they'll [be onboard].

Tell me about your new single "Take Me." Why is that song your first single returning?

AJ: For me, "Take Me" came about in an organic way. We wrote the song in a day, and it felt like a really solid introduction back to music with regards to the production value. I'm currently single and Aly has been married for two years. We're in an era of social media takeover where people are meeting each other online whether it's a dating app or through a friend on Instagram. It just comes down to, let's just meet face to face, are you gonna take me out? It's like, can we maybe just not talk on social media or text? Can we just get to know each other face to face? It's like, are you gonna make a move, or do I have to make it for you?

Are you striving for the success you had with "Potential Breakup Song" or are you in a different mindset now?

Aly: I think we're in a different mindset now. I think there are things I look back on now that I'd change. I think we're our worst critics, but I also appreciate the love for that song because it was something that came from us. We were obviously in a different place in our lives, and we're never going to be able to say goodbye to something like that because it was a part of our young adult years. I think this new music shows how we've progressed and where we are now. I think this [new] music is really focused on what we want to portray on stage. I want to make music that we're really proud to put on the radio. I don't know if me and AJ have ever made music like that before.

What do you think made "Potential Breakup Song" so successful?

Aly: I think everyone has a breakup that's pending: it's not completely finished and you're thinking about potentially getting back together with someone. We all have been there. We all have that song that you have when you go through a breakup or take a break from someone. I think this song happened to be that for a lot of people.

AJ: First of all, I think it was pure luck. I think a song either sticks with someone or doesn't. But it's crazy it's still resonating with people now.

What has influenced you guys on your forthcoming EP and full-length?

AJ: I think the influences have been all across the board. A lot of it has been '80s pop synth like Duran Duran and Peter Gabriel. Then you have more current people like Tame Impala or St. Lucia. For Aly and I it starts with vocals, harmonies and that's the magic behind it. I think that's what's so interesting about being a duo: we're blood, and there's nothing like sisters and nothing like a sister-vocal. That's what's so special about our music. Influences are great, but we try to stay in our own lane as much as we can so that we stay as pure as we can with other people.

Are you guys going to tour again?

Aly: For sure. That's what we're really obsessed with. The fact that we won't have our mom with us and I'm sure my husband will tag along as well will make it a whole new experience. Hopefully we'll be going on the road next spring.

Who would you love to tour with right now?

Aly: Gosh! AJ and I were discussing that Carly Rae Jepsen has made a really great transition from the first record she made to where she is now. I think it would be really fun to tour with her, especially being a female and coming from a solo role of having to prove yourself and being able to surpass a single like "Call Me, Maybe" with better music is incredible.

Do you guys ever regret going the Disney route? Do you feel like it helped your career flourish?

AJ: No. I don't know if we would have had a launching point. There was no social media and I don't know how we would have released music. Aly and I loved music, so we would have made it eventually. But I think Disney really helped us with regards to just being a platform. I think it all ended up working out in the end. I think we ended up learning a lot about work ethic.

Aly, you're currently on the CW show iZombie. Is there anything in-store for your character Peyton in the next season that you can talk about?

Aly: My job criteria has kind of changed, as you saw last season. That will be interesting, working for the mayor and not being the Assistant DA. I'm still human, but that could change at any moment. At the beginning of the show I was hoping I would be turned into a zombie, but now that there are only a few other cast members that are still human, I kind of want to stay that way. I also don't think I'd look very good pale as a zombie. Let's just keep me tan. I think there's more in store for the Ravi-Peyton storyline. I talked to Rob [Thomas] our creator and he said, "don't worry we're going to revisit that at some point."

AJ, what have you been up to?

I finished season 4 of The Goldbergs. And it got picked up for season 5 and 6. My character is going to college. I'll appear in and out. My goal is to do indies and work on music. I'll come on the show as much as they need me.