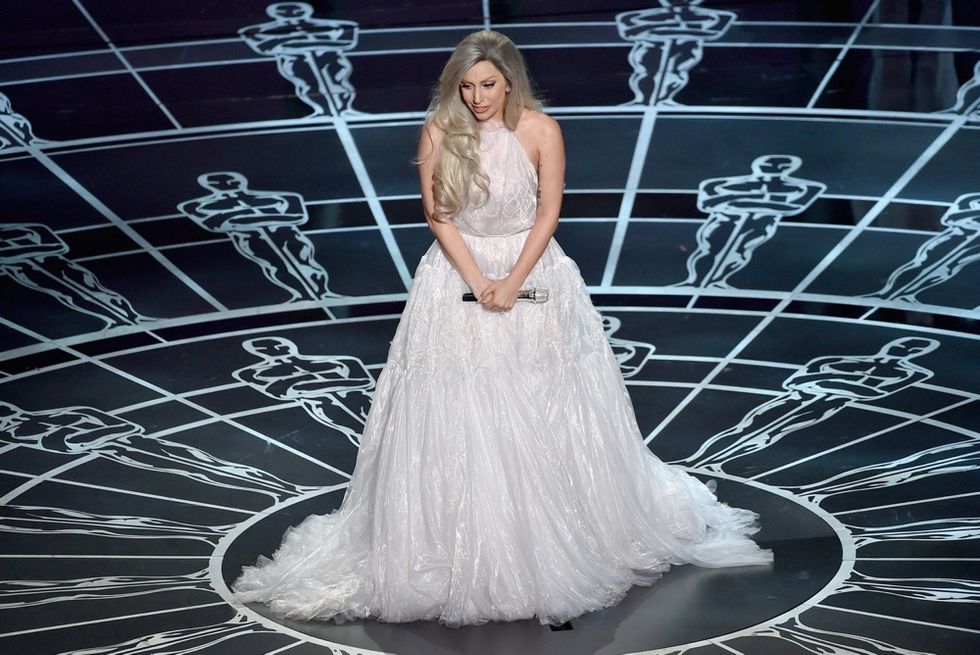 All The Right Things: 5 Key Moments of the Lady GaGa-sance of 2015:

PAPERMAG
Miss Stefani Joanne Angelina Germanotta (GaGa to most of us) has had a banner 2015.

After a few years of maximum overexposure, the mega pop star took an even deeper plunge into the ocean trench after her endearingly ambitious, but somewhat disastrous 2013 LP Artpop (I say that with much disdain because I actually enjoyed it, but I am fully aware that it was pretty terrible).

Things were looking fairly...expected (?) for the singer who for years had literally willed herself into the 'other' check box with her bare hands.

Fortunately, the chanteuse gave herself a self-imposed exile from the spotlight of sorts, including canceled tour dates for a hip surgery, and an overall emphasis on laying low.

She also got engaged to her longtime boyfriend this winter, the uber sexy and studly actor/model Taylor Kinney, whose all-American looks and demeanor seemed an odd pairing for Gaga, but it's clearly a love-match made in Weirdo Heaven.

Basically, GaGa's 2015 has been backed with the flames of a thousand "yaaaaaaaasssing" suns.

The Lady is the real deal.

5. Cheek to Cheek (with Tony Bennett): OK, the album was released in 2014, but yeah. Anyway. You can't deny GaGa's vocal abilities; she's a classically trained pianist and theater nerd who can belt it out and warble goosebumps on your very bones. So when she announced she was doing a JAZZ ALBUM with the legendary Tony Bennett, it garnered both a WTF and "Oh, wait, that's actually perfect" reaction. Let's be honest: it was hard to not snicker at first glimpse of the promos with GaGa and an 89-year-old icon; for one, the album cover looks like Lady and Tony are literally embalmed. You almost got the sense that he didn't even know he was making an album.

WRONG WAS I. WRONG WAS ALL. The album was killer; Bennett was as sharp and velvet as ever, and GaGa, once again, was one step ahead of us all, and transformed herself into bonafide jazz crooner without much effort. Her Artpop truly COULD mean anything. The album won best Traditional Pop Vocal Album at this year's 57th Annual Grammys, and debuted at number one on the Billboard 200. Just to top it off, GaGa also won the Billboard "Woman of the Year Award" last month.

4. Wardrobe:  Shockingly, GaGa has gone for the "less is more" approach to fashion this year, ditching the HP Lovecraft schtick, opting for chic simplicity. With the help of her stylist Brandon Maxwell (whose amazing fashion line debuted at NYFW last month), GaGa has been legitimately owning the red carpets, and casual wear.

In some way, she's never been more GaGa than she is today, stripped down and letting the talent speak, rather than the meat dress.


3. Her Collaboration with Tom Ford, Nick Knight, and Nile Rodgers: Earlier this month, Tom Ford released a music video starring his 2016 Spring/Summer women's collection. Oh, and also GaGa. Covering Chic's classic "I Want Your Love," with production by Nile Rodgers, and direction by Nick Knight, GaGa slayed the legendary song with a new spin on modern disco. It's fresh, and hopefully a direction the crooner will explore in her TBD announced next album. She also starred in the video, looking the fiercest that she has in years.


2. American Horror Story: Hotel: With only the first episode under our belt, it's hard to know just how good of an actress GaGa is, being the new star/villain of American Horror Story: Hotel, Ryan Murphy's annual horror anthology on FOX. Hardcore AHS fans were divided after the news that GaGa would be filling the Loubitons of the show's regular star, Jessica Lange. But from her scenes in the season's premiere, GaGa is killing it, literally, as Countess Elizabeth, the owner of the cursed Hotel Cortez. In our first encounter with Actor GaGa, she blows some coke, dons some kinky leather, does this....

....and then murders/drinks and bathes in the blood of two dumbies she and Matt Bomer picked up for a foursome.


1. The 2015 Oscars: GG's medley from the Sound of Music at the Oscars has already been placed into the library of iconic. Taking the stage in an elegant, custom-made Alaia gown, GaGa's hair and makeup were refined; she was almost...unrecognizable. Her singing was gorgeous, classic, and "Yeah, bitch, I'm that good," without beating it over our heads. It was simply divine. Her standing-O from the teary audience of Hollywood's A-List (and all of us at home), and a hug and kiss from the OG Maria (Queen Julie Andrews) after her performance, heralded the return of Lady GaGa with big gay trumpets blaring.