All Points West In the Rain

"Well," my ever-patient boyfriend mused when we finally got to our first show at All Points West, "this is why you don't hold a music festival in a bog. Northern New Jersey is a bog."

He's right: thanks to the unrelenting downpour today, Jersey City's Liberty State Park was a saturated, muddy mess by the time we got there around 7 p.m. (I missed a couple of acts I wanted to see today, like Fleet Foxes and Shearwater, because of my day job. Judging by the post-work crowd sharing the ferry over from Battery Park, it was a common predicament.) Something positive did come out of the weather, though: since most of the attendees' carefully chosen plaid button-downs and graphic tees were obscured by plastic ponchos, that great sartorial equalizer, everyone was more focused on the music than on checking one another out.

This is more like it: though the mud was still pretty much everywhere, the second day of All Points West brought lots of sunshine and happy festival-goers.

We started out in the early-afternoon comedy tent, where Judah Friedlander was doing his thing. It was the funniest stand-up I've seen in a while, largely because so much of it appears to be improvised: Friedlander establishes his character, "the world champion of the world," by explaining his outrageous athletic prowess, then asks for questions and riffs off of them. Someone asked about track and field, and Friedlander said he'd been banned from doing the decathlon because he does it all so fast -- while it usually takes two days to complete, he explained, "I get it all done in about twenty-six minutes. I go straight from the hundred-meter dash to the 1500 to the 10,000, then straight into the discus and the shot-put. Which means I've been carrying the discus and the shot-put during all those previous activities."

We were curious about the next act, Tim and Eric, who apparently have a show on Cartoon Network and whose fans were out in full force for their set. We saw the beginning of the show -- slideshow of pictures accompanied by the word "diarrhea" being sung over and over -- and decided it wasn't our style. We got some food and festival swag instead! I ended up with, among other things, a State Farm bandanna and, blessedly, a carabiner with SPF-30 sunscreen from Toyota. The guy dispensing prizes at the booth took one look at my freckle-prone skin and laughed, "Oh, this is perfect." We also checked out the Renegade Craft Fair tent, where crafty young hipsters had set up tables with exactly the sort of screen-printed t-shirts and vintage jewelry you'd expect. I got a necklace: the back of a Scrabble tile painted with a picture of a bird. The shy vendor explained that she got her design ideas from old matchbooks and French dictionaries.

There was also an itty-bitty plane flying around throughout the afternoon, advertising a Killers show in September:

Much of Day 3 was rained out -- the doors didn't open until after 4 p.m. due to the thunderstorms, all the early acts were canceled, and legions of Twitterers, waiting near the ferry, furiously tweeted that it would be better to stay home. So I did just that! Better luck with the weather next year, APW... 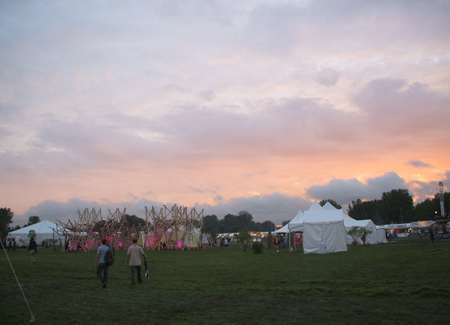 Previous Next
APW, it should be noted, is a 'music and arts' festival, sort of like how SXSW is a 'music and film' festival. There are some pretty cool art installations scattered around, like the one belowâcheck out how different it looked after nightfall. 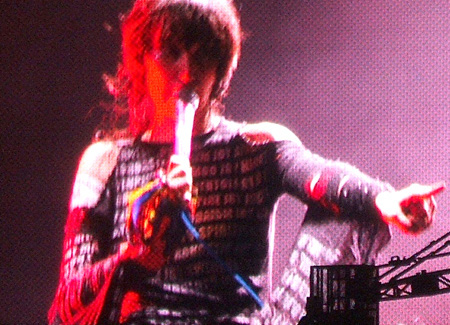 Previous Next
Karen O appears to have a love-hate relationship with her hot-pink microphone: at one point during 'Y-Control' she fit its whole round head into her mouth, undoubtedly sending some of the boys in the audience into a jealous stupor... 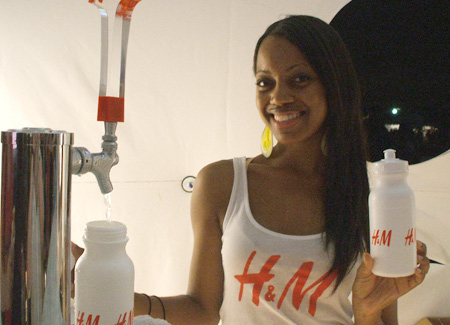 Previous Next
The H and M tent features a free photo booth with old-timey photo strips, as well as something called a 'water bar,' which is exactly as silly as it sounds: baristas serve up tap water in free plastic bottles. Since you're not allowed to bring your own water to the festival, it's actually a welcome reprieve. Dionne (above) told me she felt lucky to stay dry all day while everyone outside got soaked. 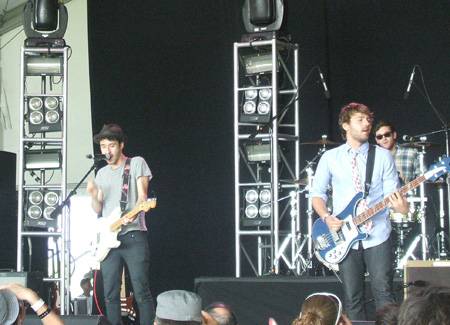 Previous Next
I dug the drummer's shades and the bassist's tie. 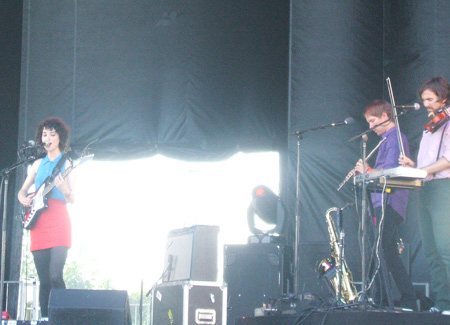 Previous Next
St. Vincent's touring throughout the rest of August, taking a break, then playing nearly every day in October. Check them out if you can -- I think she'd be even better in a club setting. 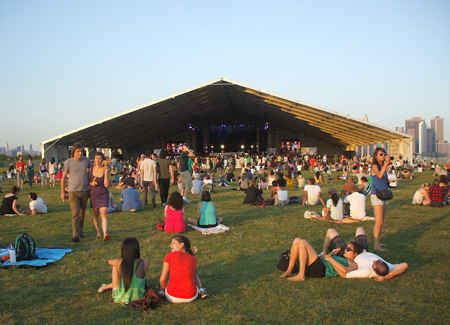 Previous Next
Chairlift actually sounded better much further back; I was happy to see such a big turnout at the smallest of three shows around the same time (Chairlift was up against Neko Case and Gogol Bordello). 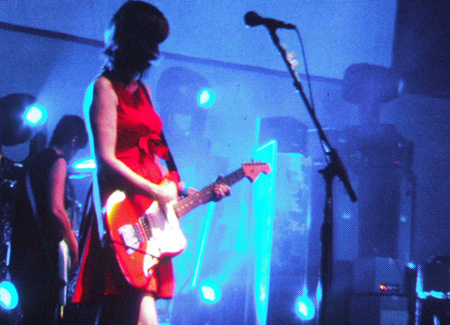 Previous Next
We headed back up to the mainstage to see the show I'd been anticipating the most: My Bloody Valentine, who went on at 8:15. The crowd was huge, the show was loud: in short, it was everything I'd hoped. I experienced some major jealousy over singer/guitarist Bilinda Butcher's getup: a bright red, '50s-tailored dress with a rosette and a perfect pair of matching T-strap heels. I don't think I've ever seen a lady band member look so classy onstage. 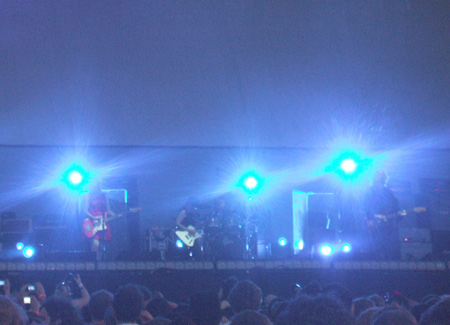 Previous Next
They stuck mainly to Loveless stuff, probably knowing (as Chairlift did) that their sophomore album is by far the better-known oneâas I remember it, only one or two songs in the entire set were from Isn't Anything. What blew me away is how stoic they all are: Kevin Shields can play a thirteen-minute riff and look the whole time like he's just waiting for his tea to steep.And, at the end of the show, play a thirteen-minute riff is exactly what they all did. The tension was incredible: I actually started shaking. 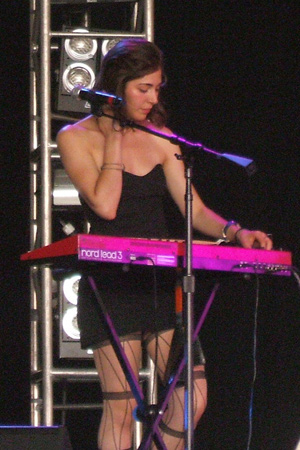 Previous Next
Afterward, Chairlift followed the cardinal rule of festival artist etiquette -- pull out the crowd-pleasers -- and played all the best-known material from Does You Inspire You (including "Bruises," which was on an iPod commercial, and 'Evident Utensil,' whose video is notable for scooping Kanye West in a cutting-edge post-production technique known as data moshing). They also played my favorite song, 'Planet Health' -- a bizarre re-imagining of high-school health class, with a cool Asian-inspired motif -- right at the beginning. The show was a little disappointing, though, which wasn't the band's faultâthe bass was turned up way too loud, so a lot of Caroline Polachek's delicate upper-register gymnastics was lost.

Sleater-Kinney Cuts Through the Noise of Fear