Isabelle Hellyer is the brainchild and designer behind Australian-made clothing label all is a gentle spring (stylized: lowercase).

Hellyer created the line, which actively resists categories like womenswear, menswear, and unisex. "We'd prefer to avoid traditional demographics," she tells PAPER. "You can decide if the clothes are for you. They are just clothes." The label is also non-seasonal, so feel free to wear any of it whenever you want.

The line was founded on the idea that "everything will be OK,' which is a translation of all is a gentle spring's namesake and meaning. If everything will in fact be OK, as Hellyer's clothes seem to promise, then there is no reason why anyone who wears them should feel constricted by limits — whether in fashion, in society, or in one's own self. That alone is liberating.

Each collection is set to be a series of limited and one-off experiments with found fabrics, and collaborative experiments with friends, Hellyer says. Working this way feels like a smart method for preserving the refreshing playfulness that all is a gentle spring is about. The first in this series is due early 2019, created with Australian painter Gian Manik, and it's based on period dress, ranging from 17th and 18th-century corsets, runic alphabets for all you sorcerers out there, and '80s bodybuilding.

Below, see exclusive photos of the first campaign, styled by Kurt Johnson, from the line's inaugural collection. Also, Hellyer elaborates on the origins, timeline, and themes to be discovered within all is a gentle spring. 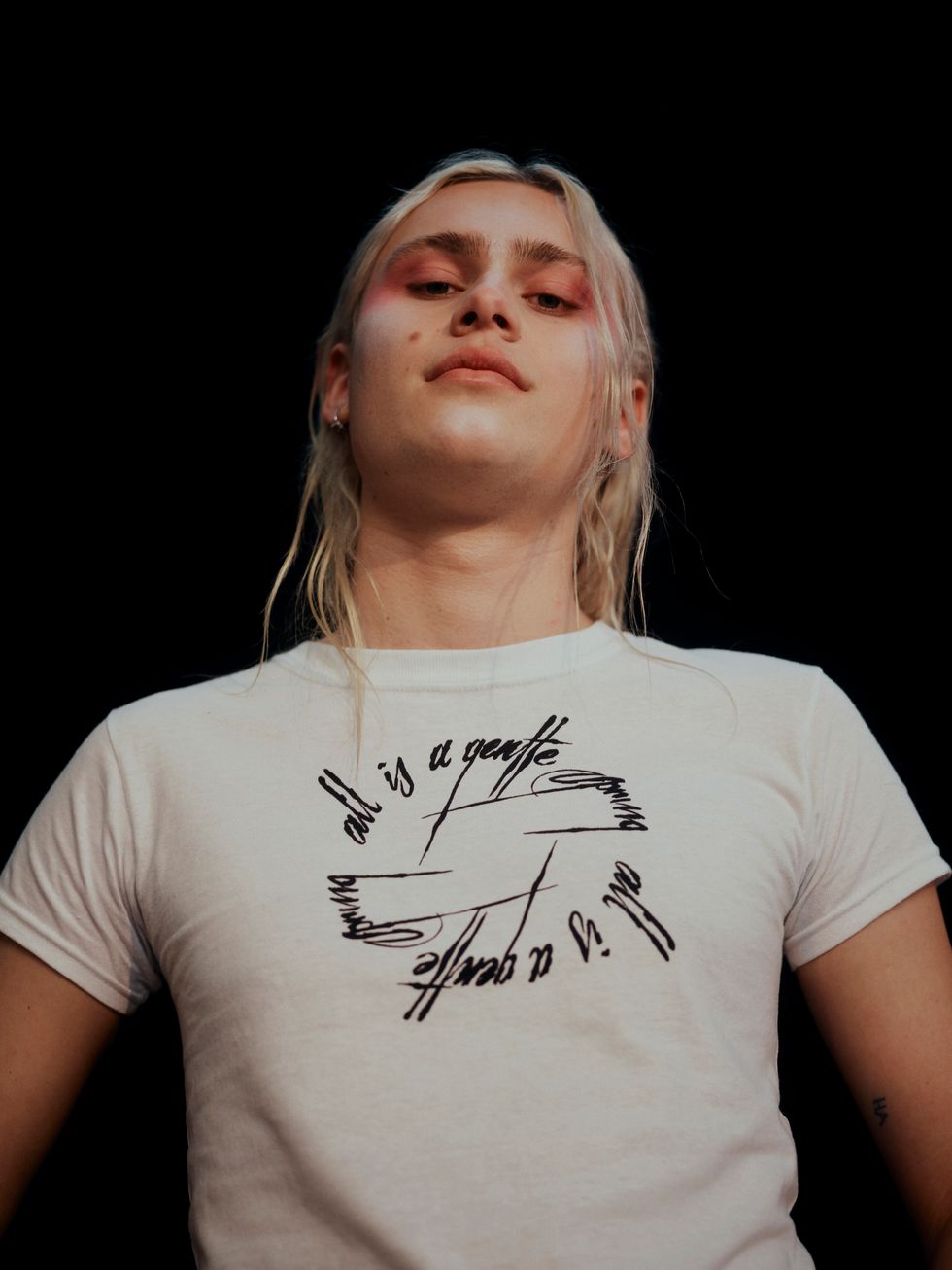 "At the moment there's a real sense of theater and extravagance in the way my friends dress — more full, head-to-toe looks, latex at lunch, corsets at the grocery store."

"The first thing that comes to mind is that it's all very personal — not in the sense it's particularly sentimental, but that it started by making things I wanted to wear. Maybe that's just self-indulgent. I've always been obsessed with historical costume: I remember I used to draw this one ballgown silhouette with ultra-wide pannier skirt over and over as a kid — I'd love to know if my mom still has some of the drawings. My dad was a historian too, so perhaps that's part of it. This collection is entirely garments I'd been looking for, and found by making them. The corset particularly. Sort of filling gaps for myself. Even the more theatrical pieces seem wearable to me — and everyone I know, and am I inspired by, isn't concerned with wearability anyway. At the moment there's a real sense of theater and extravagance in the way my friends dress — more full, head-to-toe looks, latex at lunch, corsets at the grocery store."

"The corset was the first piece I made. I actually drew the first sketch in 2016, and fitted the first toile in 2017 (originally, it had a longer, more pointed busk, which is more historically accurate, but this changed to open up more styling possibilities). But these things take time, and I was working a full-time job during that period (at i-D Australia). It takes time to decide if it's worthwhile. I think that was one of the biggest hurdles. I've know how to sew since childhood — my grandma taught me — and made things for myself on and off for years. Originally, I'd only planned on having two styles. I showed Kurt [Johnson], because I was thinking of photographing them, and I wanted him to style. He was so generous with his time, and excited by the idea—then Georges [Antoni] came on board to photograph it — so I felt like, if I had these people who I admire around me, I wanted to deliver something more. I added more styles, and it got a little bigger. All the while, I wanted to be sure the garments were adaptable — for example, would the dress work on broad shouldered bodies? For people with little titties? For people with no titties? I wanted it all to be very sexy, to feel hot, and fit is such a crucial part of that."

"There's a fantasy to [...] the idea of creating a body that's so beyond ordinary, that's more-than-human."

"It's very much inspired by 17th and 18th century dress, the corsetry particularly. The empire silhouette (of the dress and blouse) belongs more to the 1800s, but it's still fitted to create very full Baroque cleavage. Elements of all these eras are blended together, to create a more broadly historic feeling that's difficult to tie to a particular time. Nothing is an exact recreation — it's more of a fantasy world. I think you even see that in the logo, which references Runic alphabets and Croatian Glagolitic. It ended up being quite J.R.R. Tolkien, I think. Then there's all the bodybuilding influences, through the leotard to the ultra-glossy Lycra, which is so '80s. I've become obsessed with weightlifting, and I was really inspired by the way bodybuilders tend to be photographed. There's a fantasy to that too, but it's just a different kind. The idea of creating a body that's so beyond ordinary, that's more-than-human."

For more, follow all is a gentle spring @allisagentlespring.