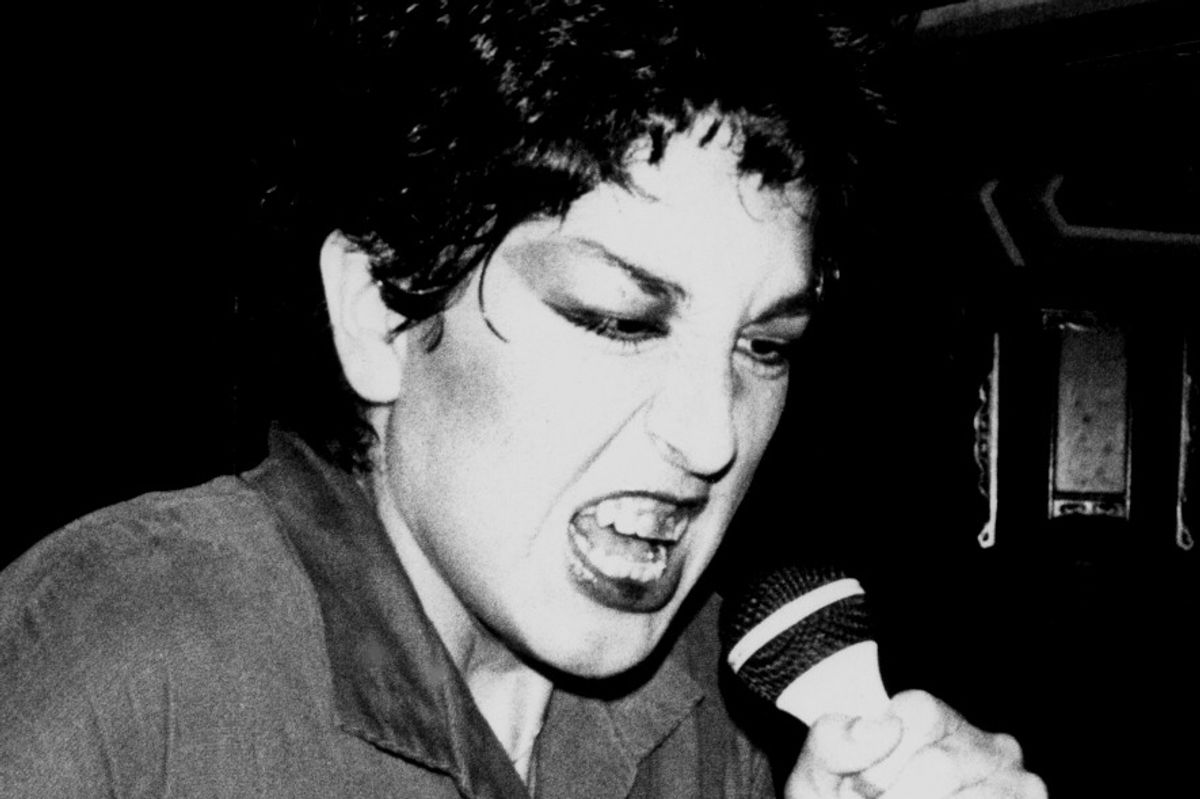 Alice Bag On Punk, Activism and Three Decades In Music

Don't ask Alice Bag about her legacy -- she's not into that word, and she also isn't going anywhere. And that's a huge relief, considering that she only recently released a self-titled debut album decades after she emerged as lead singer and co-founder of The Bags, one of the first wave punk bands to come out of Los Angeles.


Which we know was only the beginning. From The Bags to more musical collaborations to political and social activism to writing books and to painting, Bag's (nee: Alicia Armendariz) pace has been relentless. Her memoirs, Violence Girl and Pipe Bomb For the Soul delved into her own story, while Alice Bag (the album) combines her penchant for storytelling with the urgency of speaking out. Singles like "No Means No" call out rape culture, while her latest ("He's So Sorry") tackles domestic violence, which she drew from personal experience.

I spoke with Alice about her record, about learning to speak up, and what we may all have gotten wrong about activism.

Alice! This album is so exciting. Why did you wait to release a solo record?

It had never occurred to me to make an album on my own. I spent so many years working in band situations, I just never thought of myself as a solo artist. Doing my own book, arranging the travel details for my book tour, and being asked to produce another artist made me see myself in a different light.

Was there an 'a-ha moment' when producing another artist or scheduling your tour when you realized a solo album couldn't wait?

I was at Station House in Echo Park talking to Mark Rains, the engineer and studio owner about what I wanted to do with FEA's recording. When he started describing some of his equipment, talking about using two-inch tape, I found myself imagining not only how I would record FEA, but how I would record myself. So yeah, that was the a-ha moment.

How did punk -- and the bands you worked with -- help you find your voice?

I think punk really embraces imperfection. As a punk artist, I crave raw, creative expression and prefer it over something that is too slick or polished. That's not to say that I don't work on my art or music and try to improve and hone my skills, but life has some sharp edges and I prefer my art to have them too.


Did you find activism through punk, or was it vice versa?

I learned the power of community during my involvement in the early LA punk scene. Then, in the early eighties I was frequently asked to perform concerts in support of a group called CISPES. CISPES was an organization that worked in solidarity with the people of El Salvador and organize resistance against US intervention in Central America. That eventually led to volunteering to work in post-revolutionary Nicaragua as a literacy coach for the Sandinista educational program. That opened my eyes to many, many things which continue to affect my activism and my writing to this day.

How has your approach to activism changed since you first began working in it?

When I was younger, I thought of activism in terms of participating in large demonstrations or group actions. As I've gotten older, I've realized that we can all contribute in different ways. Using our diverse strengths is a very powerful and inclusive way to accomplish change. Sometimes, work or family obligations -- or simply our physical location -- can prevent us from joining a large, organized group action, but the things we do in our personal lives also create change. It can be as simple as challenging a friend's or neighbor's point of view. It doesn't matter how small your action is, the important thing is to act.

How do you think activism has changed in general?

Understanding that all action creates change has helped diversify my own activism. While I still participate in group actions, I am bolder about taking independent action. I write, create, and perform music and incorporate subjects that challenge the status quo. I also do portraits -- my favourite subjects are punk women. I want to paint over our erasure with those portraits. I want to take that whitewashed wall where our history is written and graffiti the names of all those whose stories have been ignored.

When did you start the portrait series? And when did you begin painting?

I took an oil painting class when I was living in Arizona a few years ago. I painted portraits of my three daughters and posted a photo of them on Facebook. Shortly after that, my friend Kelly Thompson who curates art events here in LA wrote to me and asked me if I'd be interested in contributing to a group show. At the time, I was just painting for my own amusement, so I was surprised and thrilled by the invitation. The show was entitled, "Heads Will Roll," so I decided to paint portraits of the members of the Castration Squad. I started working on those portraits in Fall of 2013 [ and] the show was in Spring of 2014.

Since then, I've continued painting punk portraits. Recently, I was working portrait of [Jewish lesbian folk singer and Cardboard Cobbler] Phranc, [but] earlier this year, I was diagnosed with pneumonia. My doctor asked me to take a break from oil painting to give my lungs a little break from the harsh chemicals I was inhaling.

I'm so sorry to hear that. Do you think social media's made activism easier or do you think it's made us lose sight of the big picture?

I think social media has the potential to do both. It can make activism easier, but there is a risk of focusing on the finger pointing at the stars, instead of seeing the stars.

I love that description. Do you have a way of reeling yourself back in or taking a step back when you find yourself getting too angry? Because sometimes I feel like anger at injustice can become almost all-consuming. And then you can't act at all.

While you can definitely expose people to ideas on social media, I feel that there is very little opportunity for real discussion. It's sad the way some people behave online. Maybe it's the fact that some sense of anonymity allows people to feel like they don't have to own their statements. I try not to get wrapped up in comment wars -- they are pointless, there's no real dialogue or exchange of ideas in that.

So how does music help articulate your beliefs in a way that writing doesn't?

Music speaks a language that needs no translation. It can convey what words cannot. It is a better vehicle for emotion because it literally resonates within us, like sound waves stirring water. When I was in the Bags, we used to play at a club for the deaf and I realized by watching the audience that they didn't even need to hear my words, the vibrations they felt and my body language alone were enough to convey my meaning. That's powerful.

That's incredibly powerful. So how did your books influence you as a solo artist? Did writing those change your approach to writing music?

I never imagined myself as a writer, so the first book was new territory for me and working on it made me feel rejuvenated. I think that trying new things reawakened a sense of wonderment in me and a hunger for novelty.

One thing that writing books helped me do was make friends with the English language. My primary language is Spanish, and for many years I felt like I had a truncated vocabulary. I might know the meaning of a word, but I might not know how to pronounce it. Writing the books gave me confidence. I went from feeling embarrassed about my lyrics to actually allowing people to read them.

Was the warm reception to your writing validating? Or was writing something for you, outside of external validation?

I was overwhelmed by the reaction to my book. It was extremely positive, far beyond what I could have imagined. I'm not talking about book reviews, although those are nice too, I'm talking about the individuals who came up to me at readings and told me how my book had touched them personally. I found myself hugging strangers, crying with some, and laughing with others. I don't know if I can call that validation. I wasn't really seeking validation. My experiences are my experiences, I write the way I write, I'm the only one who can tell my story in my own words -- I don't need validation for that. I'm always seeking connection and I'm achieving it.

So what legacy are you hoping this album will leave? Or do you hope it's part of your legacy in general?

Good! So what have you learned about yourself through helping others?