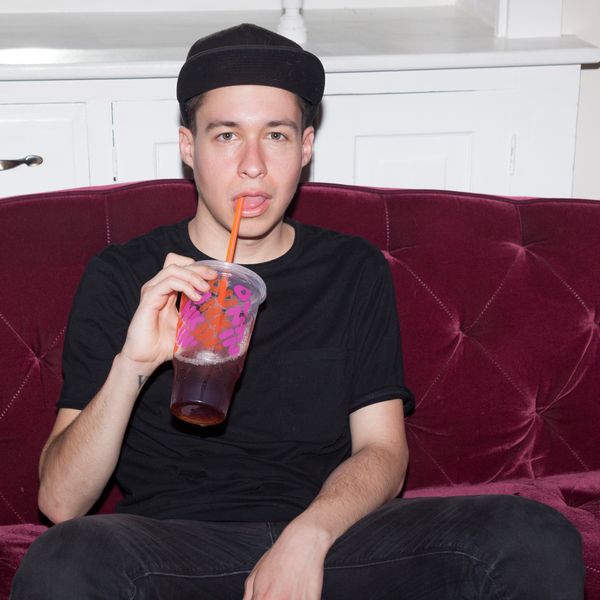 Drop Your Body Down to AlexZone

"Oh shit," he chortles. He's always had a habit of talking through his laughter, syllables punctuated and staccato. "How do I make. this. sound. smar-ter than-nn it is?"

Enter Alexzone, the stage name of Alex Bailey who cooks up some of the best hyperpop out there when he's not hosting Pop Dot Com, his quarterly event for DIY pop makers to showcase their work at Chicago's Berlin Nightclub.

Related | Why That Kid Really Is 'That Kid'

Influenced by UK pop acts like Rachel Stevens, Sophie Ellis-Bextor and the mighty Girls Aloud, Alexzone songs whirl through the tenets of bubblegum pop while dropping clever little tricks along the way — simple instrumentation, simple lyrics, simple, syrupy melodies with occasional twists of flavor. It's fun pop that isn't that smart and doesn't need to be.

"I started getting more serious about music a couple years ago, after I got sober," Alexzone explains. "I started working with Boy Sim, who I met on Twitter." Boy Sim, who has worked with acts like Slayyyter and Nattalie Blake, sends Alex instrumental tracks online, whence Alexzone writes his own lyrics and melodies. The two share files back and forth until a "pop song comes out."

Their most recent collaboration is a song started back in November called "Tie Me Down!" It starts off with a familiar marimba-y introduction (which wouldn't sound out of place in an old single from The Saturdays) before a heavier, darker synth slithers under Alexzone's auto-tuned vocals. Then, the entire bottom of the track falls out to reveal a chorus that pleads, "Let's dance like we're the only ones around/ I won't make a sound, just tie me down."

Related | Jake Germain's 'Compares to U' Is for All You Loners

The image Alex sent us for this story shows Alex sipping an iced tea from a popular donut chain — maybe it's a nod to the sugary, manufactured sound he strives for. Or perhaps his closer friends will recognize it as an homage to a late someone who, if he could see it, would be very, very proud of his son.

You can catch Pop Dot Com's Ring Central event on May 6 at 8 PM where performers will share unreleased material and other rarities. "Tie Me Down!" can be found, below, and wherever your music is streamed.