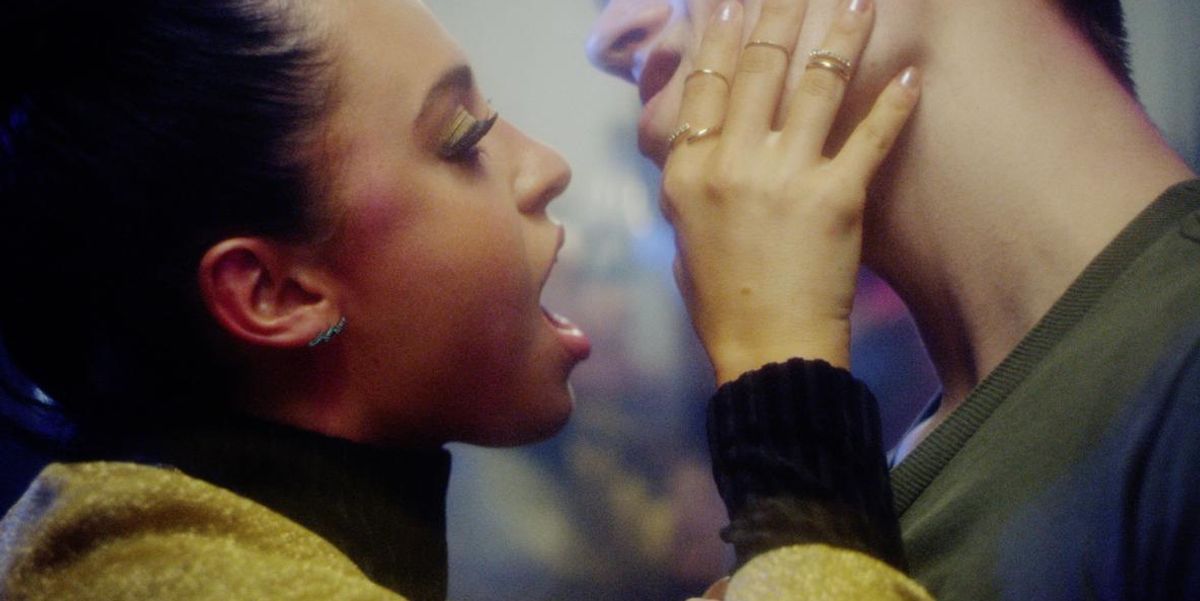 On her song "Red Eyes," Florida-turned-Los Angeles pop-diva-in-training Alexx Mack declares that she and her friends "party naked" all night. (Hence the red eyes. Clearly, Mack and company aren't getting their proper eight hours of sleep a night.) The video for "Red Eyes," the new single from her EP Like We're Famous, isn't quite as risqué as the lyrics, but it definitely fits the late-night hedonistic vibes of the dance floor ready track. Along with her new video, PAPER talked with Mack about her Florida roots, finding herself and her paltry knowledge of mid-90s Nickelodeon shows.

Jupiter Island is where the insanely rich people live, right?

Okay, that's where Madonna lives. What was growing up in plain 'ol Jupiter?

What was I like? I was a little bit of a rebel; kind of a mischievous child. I would convince my parents that I was sick, and stay home from school a lot so I could write songs. I was in a band. I worked with a lot of musicians from my town. I honestly wasn't bad, I was just more focused on music than anything else.

What kind of music were you making with this band?

It was like acoustic singer-songwriter kind of stuff. It's where I really honed in on my writing and things like that. I went to a small private Christian school where I just didn't fit in with a lot of the ideals, and I spoke out way too much. I remember, it was my junior year, and they were kind of like, "you shouldn't come back."

So when did you move to LA?

I moved to LA... it'll be four years in February.

It was terrifying, because I moved out there not knowing anyone besides my vocal coach and my acting coach, who I was going to see in my classes. I didn't know anyone. It was really lonely at first, but I always knew that music was the only thing I wanted to do and feeling lonely or scared was totally worth it to be able to do what I couldn't do back home. I fell into a really cool community of writers and musicians and it turned out some friends from Florida ended up moving to LA and we kind of created a community and it was really cool.

What part of LA do you live in?

I live in West Hollywood.

For me, it's perfect. It's a little rowdy, which I like. I like the energy. I like being able to walk to a lot of the different clubs. I live really near the gay scene which, to me, that's just my favorite part that I get to be around all that. It's a really fun place to live. I didn't like Hollywood. Hollywood was too crazy for me.

So you've been there for four years. How long were you there before things kinda happening for you? Was it pretty quick, or was there a lot of rejection and people being disinterested?

I wasn't sure of who I was until even a year ago, or maybe a little bit over a year ago. I'd say that's when things started to really pick up for me when I released "Bad" online. That's when everything started happening, when people started paying attention. I think it's obviously so important to know who exactly you are before you start releasing material, and I was an excited kid and I would release stuff that wasn't exactly myself, but at the time it felt like it was. Now, I have a really solid idea of my message and what I'm trying to put across. That's when things started, probably about a year ago.

Were there any earlier tracks you look back on now, like, "why did I try to do, like, death metal?"

(Laughs) Um, there's a couple songs that I've written that I've just been like, "okay, like, that's not who you are. What were you thinking? What were you going through at that point in time?" I mean, that's why I love music, because I can look back at those songs and be like, "okay, I was going through this, which made me feel this, which made me write this but how funny, that was just a phase." Now, I feel like I'm writing about things that are more authentic.

What would you say your current style is now and how did you finally get there?

I would say that I am inspired by everything from disco to modern pop. I think how I got here was... I really tried to fit a mold that other people were trying to tell me that I should fit and it wasn't until I looked at the songs that made me smile when I sang them, or the songs that I listened to when I'm happy in the car that I really realized, okay, this is me. So that was kind of the discovery period, going from feeling like I needed to write stuff to be able to compete with everything that's out there to really just writing just what makes me happy. So that's what I'm inspired by. I'm inspired by... I love when I listen to things and I feel a little nostalgia like, "oh, I've felt this before, I've heard this before." And that's why I think I touch on '70s, '80s influenced music.

Were your parents cool with you going to LA?

Oh yeah, my parents are the coolest people ever. Like, god bless them. I don't know how they do it. They're incredibly supportive. My mom was a musician, my dad always dabbled in music, but he's incredibly smart. He was just like, "I don't want you to grow up and do anything that you're not happy waking up and doing." So they were always really supportive of it.

What's the plan for next year, you have a full length on the horizon?

I think before that comes about, I'm gonna be doing a lot of touring and playing a lot of shows. I really wanna be able to have this material and bring people into the world that I've envisioned for this EP and the best way to do that is a live show. So that's what I look forward to doing.

How'd you decide on your stage name?

Okay, so this is really funny. I have a couple personalities, I like to say. There's my business side. There's my creative side. Then there's my sassy side, which I really personify as Alexx Mack. I was out with some friends — and it happened more than once which is why I thought it was kind of a sign — when I get sassy, they'll be like, "oh god, look at Alexx. She's over there macking on some dude." And it kind of came up like that like, Alexx Mack, Alexx is macking on the dude. It was just a joke. And then it stuck.

Were you a fan of the show? Or were you too young?

I never saw it.

Really? Will your album be called The Secret World of Alexx Mack?

Probably not gonna go there.

Why not? it's right there.

I think there might be a trademark issue there, you know?