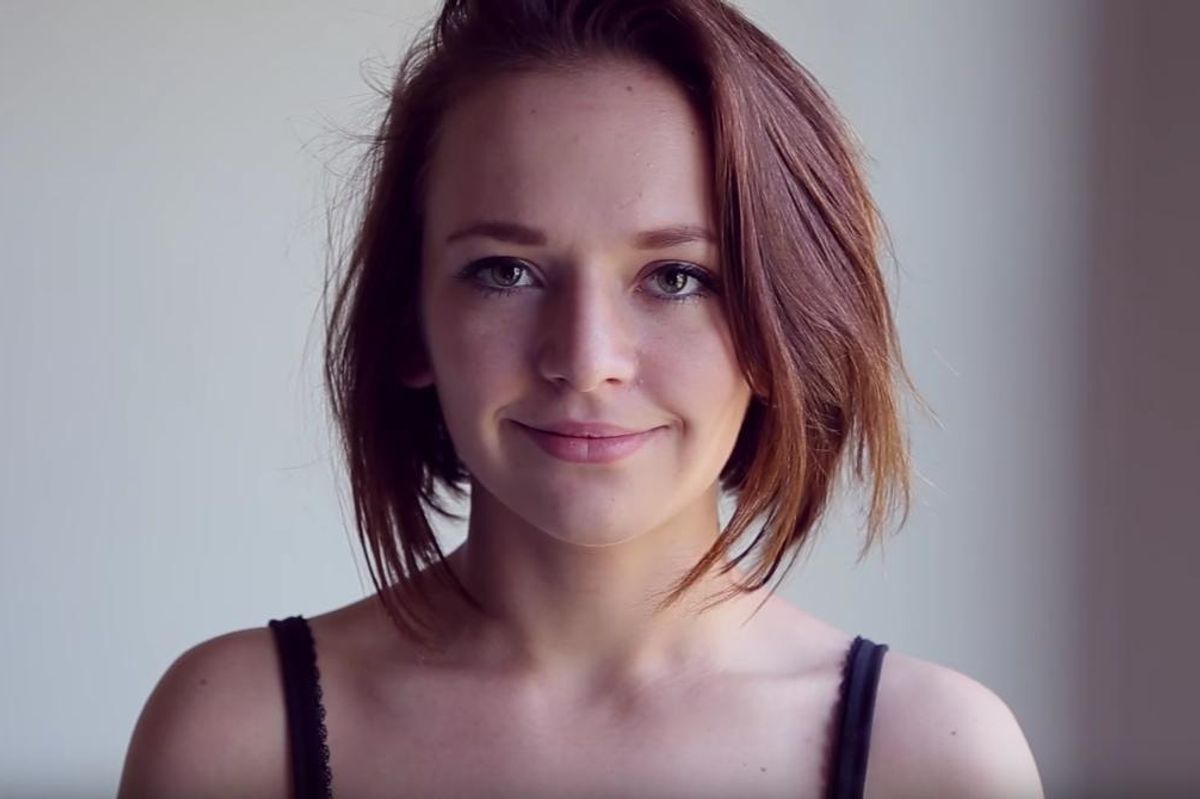 Youtube Star Alexis G. Zall Talks Coming Out Online, the Appeal of the Odd, and Turning Lettuce into a Pinup Girl

Online fame comes in all shapes and sizes. In many ways, there's something beautifully democratic about it: If you're around a computer with a video function and internet access, you have all the tools to make a real, public name for yourself. It's the next step that's the real challenge: Standing out in your own unique way. For for the Los Angeles-by-way-of-Arizona 18-year-old YouTuber Alexis G. Zall, personality proved to be king, and her success URL birthed success IRL. Her quirky videos reach 1.1 million subscribers on YouTube, and encouraged her to launch a podcast, Zall Good.

Alexis spoke with us hours after arriving in Los Angeles after a flight from Singapore, where she spent Thanksgiving with her family (they were going to go to Costa Rica but were side tracked by weather.) Zall let us in on her world, from coming out earlier this year to designing a deliberately un-sexy calendar shoot featuring produce.

Your YouTube story is an interesting one. You started using the platform after a gymnastics injury. What happened?

I was gymnast for 11 years, age 2 to age 13. It was my entire life. I worked out 25 to 30 hours a week at the gym. I started online school so I would have more time for practice. I got a really bad injury so I had a bunch of free time. I started an acting class, locally. Someone told me about a YouTube channel they watch. I started watching a bunch of YouTube because I had a bunch of free time and I got really into YouTube. I thought, "This would be a really great way to practice acting." That's all I really wanted to do with it at the beginning. I really liked it so I kept working on YouTube videos and acting stuff and then they both went hand-in-hand and informed each other.

YouTube is different from acting, though—you have to create skits and edit videos, there are a lot of levels to it. Did you like the complete creative control? What about the platform drew you in?

I'm really interested in overall storytelling, whether it's acting in something or creating it, I like all of that. I liked that I was able to be creative and tell the stories that I wanted to tell in my own way. When I wasn't working as an actor I was able to make YouTube videos and work on my career even if I didn't have a shoot or a project.

When did you realize that you were growing in popularity?

I worked for two years making videos consistently to get to 500 subscribers. I went to this event with a friend of mine and met a YouTuber named Lisa Schwartz. She gave me a shout out on her YouTube channel. I remember it was the day I was moving in Arizona. I got a few hundred emails and was like, "What is going on?!" I gained a bunch of subscribers and people were commenting on my videos and that's when I started to garner a following. At the time, I went from like 500 to 5,000 subscribers. It was hardly viral fame, but to me, it was such a big deal.

Maybe that's more sustainable, when it's a slow build instead of one viral vid you spend the rest of your career trying to recreate.

The fun thing about YouTube is that everyone's story is always so different. You never know how things are going to pan out.

It's interesting that it started out with a shout out—it does seem like there's a really beautiful collaborative culture within YouTube that people don't always realize.

YouTube is very collab-heavy. I feel like it used to be more than it is now. Being friends with YouTubers, being able to make friends in the community, has been so helpful—not just numbers or growing your channel, but creatively—bouncing ideas off friends and giving tips and advice is really helpful.

After digging deep into your fans' and subscribers' posts, it's easy to see that one thing they admire the most about you is that, for lack of a better term, you're a little weird! What's the benefit of being a little out there sometimes?

I think everyone is so different and the best thing we can do is allow ourselves to figure it out and find ourselves. That's a message I want to perpetuate on my YouTube channel—I feel that my content has changed a lot over the years. As teens, young adults, adults or whoever—you're constantly changing and evolving, it's important to allow yourself to go through those changes.

There are so many YouTubers now, it can feel overwhelming or even oversaturated. You stand out because you've found what you're good at, and you've made a personal empire out of it—outside of YouTube there's your commercial acting and your podcast. Are you driven to try new projects all the time?

I'm endlessly fascinated by entertainment. To give an example, there are so many movies that I've watched that have had such a profound effect on the way I view the world and the way I'm able to make connections. I hope that I can make something that will make someone see something more positively or just see the world in a different light. That's really cool to me. People will ask, "What's the end game?" There are a lot of things that I want out of this. I would love to have a television show, things in that vein, but there's not one project that I want. I want to keep working. I want to keep creating. That's really it.

What drove you to do the podcast, Zall Good with Alexis G. Zall? You have YouTube, why pursue this very different platform?

YouTube is so unpredictable. You never know how trends are going to go or how things are going to pan out. You always want to have things that you're working on. I love talking to people. I love a good convo. Part of the fun in podcasting is just being present and listening to what the other person has to say. All the guests that I've had are people that I care about and people that I'm really interested in. I may not be an expert on everyone that comes on the show, but that's the fun. I'm just interested in them, as opposed to a super fan or someone who already knows everything about them. I always want to get people to say things they've never said before. Not necessarily a secret, but, like, "What's the first thing you do when you wake up? What's a normal day like for you?" I'm all about supporting some nice, hardworking people.

We have to talk about Lettuce Guide. What is this calendar thing?

It's a calendar that two other YouTubers and I made last year. We wanted to do something where it was strong women, not just looking sexy or being hot on a calendar. None of the photos are particularly flattering. It's all comedy-based. That was my only goal behind it: To make something funny, not sexy or pretty.

In the video you posted for your 18th birthday this summer, you publicly came out—and were met with a lot of queer youth showing support and commenting that you made them feel less alone. What made you decide to reveal your sexuality on YouTube?

I've been making "17 Tips for 17 Years," that kind of video every year since I was 15. Those videos are really important to me. They're my favorite videos that I make. They're the most honest. It's where I really open up the most, in any regard, on my online presence. I felt I couldn't authentically open up about my life without talking about something that became a really big part of it. Not just my sexuality, but it was a big part of finding out a lot about who I am as a person. There was no way for me to make that video without talking about my sexuality and how it's effected my life.

Have you been vocal about LGBTQ+ issues since publicly coming out? Have you considered it?

What advice do you have for young people who admire what you do and might want to pursue something similar?

The advice that I give, usually, people don't like it. They want me to say, "Make this video and it'll go viral and then you'll be famous." Really, the advice I have for any young person who not only wants to do YouTube but wants to do literally anything that they're excited or passionate about, and the way that I relate it back to YouTube is "Make a video." All you have to do is make a video. It can be really bad and that's fine. You learn so much when you make your second and third videos. You get better and better. Find your voice. Maybe you'll find you don't even like making videos, you just like watching them. That's so fine! Whatever you want to do, make one, and another, and another.

When you're not working on a million different projects, what do you do on your down time?