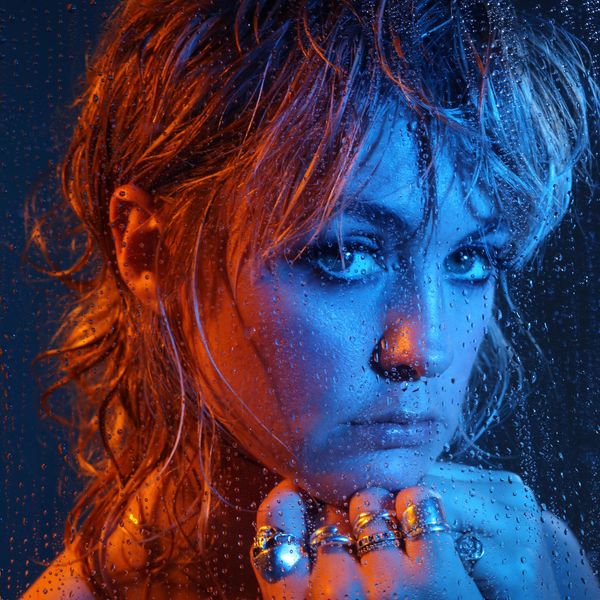 One of the first things PAPER learned about Scotland-born, London-bred pop musician Alexina was that she is a feminist who takes her stage name from a real-life Scots female warrior. We then learned of her love of literature, from social satirists like George Orwell and Kurt Vonnegut to absurdists like Roald Dahl. She also writes her own poetry and publishes children's books inspired by her dog.

Growing up, Alexina played in bands when she didn't have a book or pen in hand. Alexina's imagination leaps from dusty library pages and into your headphones on her new melancholy dance-pop single "Partying On My Own," premiering today on PAPER. The catchy song boasts a spacious, thumping beat with delicate synths — a perfect frame for Alexina's truly special voice, which has old-soul rasp and new-school brightness simultaneously.

The lyrics dance the figure 8 of romance, from "first dreams and video games" to realizing the one who can't "just say you fucked up" may not call. As if by magic, the song captures the isolation of a breakup, and what can happen in one night when sparks fly between would-be lovers. She "gets high on a feeling" before the inevitable comedown, but Alexina, like her favorite literary protagonists, keeps the fantasy alive as a party of one.

"'Partying On My Own' is a late-night song written about about the numb and going-out nights after a break up," Alexina says. "Euphoric nights out dancing, the bleak first trains home, the cold 7 AM sunrise. It's a crying-on-the-dancefloor sort of tune because underneath it all, I'm quietly enjoying the escapism.

Listen to the song above, and while you listen, check out Alexina's go-to literature inspiring "Partying On My Own," and save them to read this summer during solo treks home after a wild night out.

First Love is a heartbreaking short Russian story about young 16 year old Vladamir who falls in love with 21 year old Zinaida in the country on his summer holidays from school. His growing and deep obsession with her, the childish love, his heartbreak (at finding out she is in fact his father's mistress) feel similar to the same lustiness and ultimate sadness in "Partying On my Own."

I found Gordon Comstock, the protagonist of this sad, semi-wretched book, completely compelling in his loneliness, rejection and defiance of society and "the money-Gods". In one scene, he wanders the streets in the dark, idles in his lodging room late at night unable to write and procrastinates deeply. It is not too-dissimilar to the way that "POMO" presents going out, losing all morals, stalling through the night. It was the loneliness that felt very familiar to me.

​"A Certain Smile" by Francois Sagon

Another story about extreme love and rejection, "A Certain Smile" sees a young student, Dominique, fall hard and fast in love with older, powerful Luc, her boyfriend's uncle. Set in Paris and the countryside of France, the book is so intensely romantic. Yet at the end of the day, Luc will never leave Francois, his wife, for the intelligent and old-before-her-years Dominique. Another sad love story with colourful, fast-paced and bourgeois description but a heavy, heartbreak ending. The dark power of young love strikes a chord in "POMO."

​"The Last Act"  by Roald Dahl

The dangerous story of "death by fucking," as Roald Dahl put it, Anna loses her husband in a car accident. Months later and semi-suicidal, she goes to Dallas for work and meets with her childhood sweetheart Conrad who she left for her now-dead husband. After telling old stories and getting drunk, they go upstairs in the hotel where Conrad tries to rape her in bed. She screams murder and Conrad flees. Anna goes to the bathroom and opens the razor cabinet...conclusion to be drawn by the reader. The story is so dark, so sad, fumbling for familiarity and dangerous in a way that I wanted "POMO" to feel, albeit the grisly ending.

I love this dark and beautiful poem by Philip Larkin as he contemplates the idea of impending death from his bed at 4am. It is so melancholy and depressing and so aware of the fear of dying. Love dies too and with that comes equally haunting and gloomy feelings that life will never return in the same way as when it was filled with love and happiness. In the same way as we have those irrational thoughts at god knows what time in the morning having lost a lover and on a come down.

"The Woman on the Dunes" by Anais Nin

Anais Nin was the first erotica novelist I read as a young teenager and I was always incredibly inspired by the delicate and intimate description in her short stories - particularly in The Woman on the Dunes. The simple, powerful yet soft language I hoped to convey in the verses of "POMO" — to help sculpt and create a vision of this man coming into my life, were greatly drawn from Nin.

"The Book of Laughter and Forgetting" by Milan Kundera

There is a poignant moment in the Book of Laughter and Forgetting where Kundra describes the face of the Slovak politician, Vladimir Clementis, as being rubbed out, erased from a photograph taken in the 20s. This historical reference sits with the similar theme of Partying on My Own where important and hard-to-remove memories were instead rubbed out by partying, trying to get fucked up and move on. The narratives in the Book of Laughter and Forgetting weave through sex, tension, the art of forgetting and magic, I feel like "POMO" does too.

I studied this Sylvia Plath poem aged 16 and from then on, became absolutely fascinated and semi-obsessed with her, and Ted Hughes, too. The gritty, dark, chugging, clawing and clunking description in Daddy is so beautiful. In a sense this poem sat beside me more so after "Partying on my Own" was written. A dark sigh, a relief, a complete freedom.

I cried solidly throughout this book, with laughter and sadness, in the same way that I did while "POMO"'ing.

Another sad and pretty tragic story by one of my favourite writers. Flory is an English timber-merchant living and working in his beloved Burma whose heart is shattered when he is rejected by young Elizabeth twice. No fairy tales, just an intense, sad, tropical and suppressing story piqued with glimmers of hope for Flory but winding up with a dark and tragic ending. "POMO" felt like that at the time.