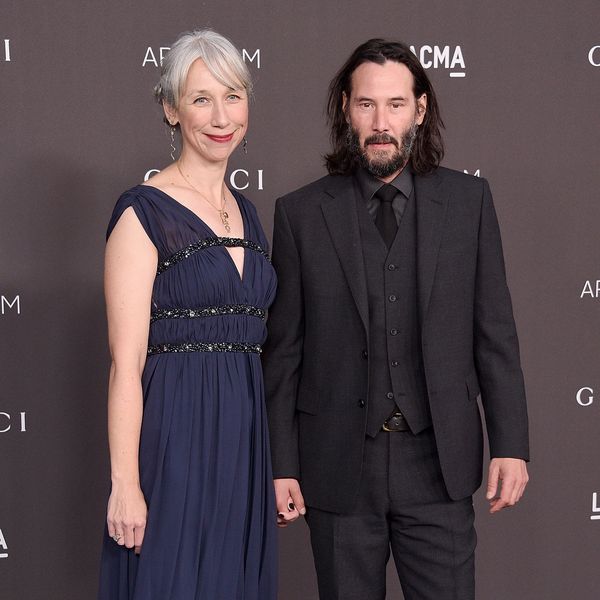 Alexandra Grant on Why She Stopped Dying Her Hair

In the wake of Keanu Reeves — one of Hollywood's most beloved longterm singles — landing new girlfriend Alexandra Grant, a lot has been said about their dynamic and Grant herself. Unfortunately, much of the discourse has not been about her professional achievements as a successful visual artist, philanthropist, and author, but instead about the color of her hair. Cue ageism and misogyny.

For weeks, Twitters users have been perplexed why Reeves would "choose to" date someone who "looked" as old as Grant (even though she's about nine years younger) and subsequently, why she does not dye her hair.

Now, the 46-year-old has finally addressed the issue. Under an Instagram post featuring a screenshot of an article that discussed the link between permanent hair dye and breast cancer, she wrote," Wow. Today's news... The numbers are staggering, especially for womxn of color. I went gray prematurely in my early 20's... and dyed my hair every color along the way until I couldn't tolerate the toxicity of the dyes any more."

She continued to describe how in her 30s, she let her hair turn "blonde" and prevailing beauty standards shouldn't dictate how women choose to look. "I love and support that every womxn can choose how she wants to look at every age," she wrote." But/and, if womxn are perishing from beauty standards... then let's talk about those beauty standards. Love to all womxn!"

The post seems to have struck a chord with many, as her followers flocked to offer support and share their own stories.

"Wow, my mother died from breast and lung cancer. I always suspected the toxicity of the beauty salon. She was bottle 'blonde' my whole life. Wow. You look amazing with your silver hair, Alexandra," one follower wrote.

"What you just stated is incredibly powerful and revealing message i just love it. Once again, we must decide our concept of beauty , We must feel good with ourselves for the kind of people we are and how we treat others. And Alexandra you are incredibly beautiful in and out just as you are . Never change," another added.

Grant makes a compelling point about beauty standards — especially pertaining to older women, as they continue to be encouraged to conceal any single sign of aging. Although many came forward to congratulate Reeves on having an "age appropriate" girlfriend, others applauded him for simply being with Grant despite her age and visible gray hair.

In a previous post featuring a throwback photo from College of Grant and three of her other friends, the artist made another reference to her hair in her caption.

"Four dear friends after Freshman year of college about to take off on a roadtrip across the country. Four 18 year-olds... and I couldn't drive!" she wrote. "At the time I was a math major... What would I tell my 18 year-old self now? (You'll be a "blonde" in your 30's? You'll give up math for art?). And what would my 18 year-old self tell me today? I'll get back to you on that!"