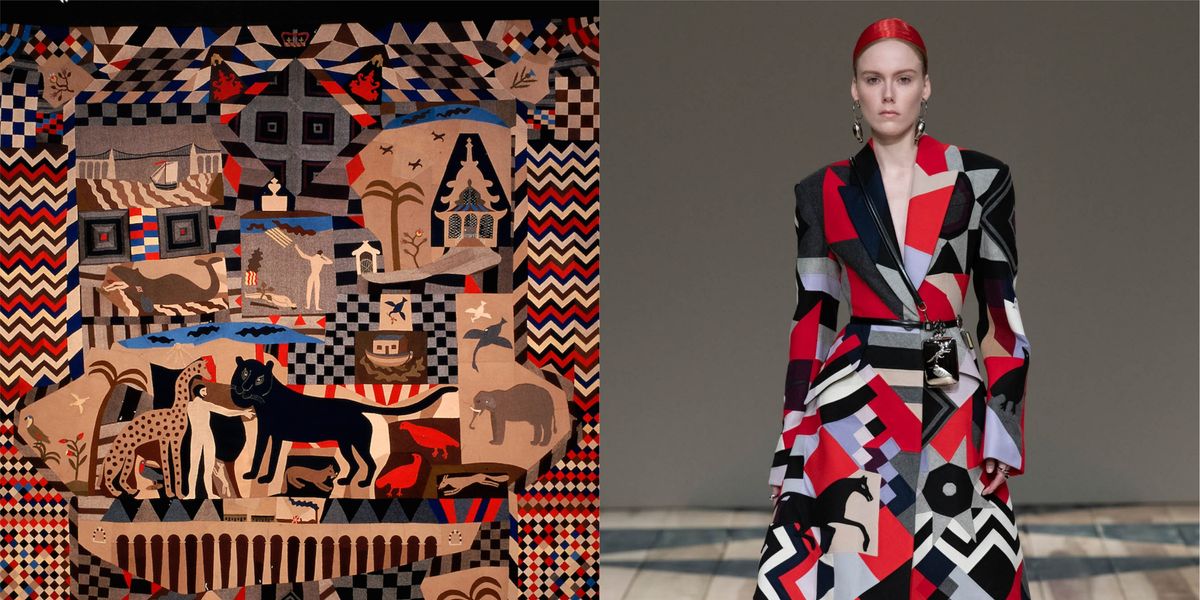 Back in March, Sarah Burton explained the starting point for her Alexander McQueen show after a trip with her team to Wales. "The collection is a love letter to women and to families, colleagues and friends," she said. "We went to Wales and were inspired by the warmth of its artistic and poetic heritage, by its folklore and the soul of its craft."

Related | The Rise and Rise of Fashion Archive Instagram

Two looks in particular from that Fall 2020 collection — a patchwork suit and tailored coat — were notable for their graphic patchwork prints and animal motifs. They were both inspired by the Wrexham Tailor's Quilt, a mid-19th century artifact that caught Burton's eye during a visit to St Fagan's National Museum in Cardiff.

The quilt, which took ten years to assemble, is made up of over 4,500 scraps of recycled cloth by James Williams, a military master tailor. A variety of biblical scenes historical references are incorporated throughout, from Noah's Ark to Jonah and the Whale.

Burton, who said that the quilt represented "a narrative of someone's life," transposed and embroidered those patchwork designs onto tailored garments made from upcycled wool from past collections. Alexander McQueen gave PAPER a behind-the-scenes peek at the making of Looks 12 and 18, first seen on the runway during Paris Fashion Week.

Burton and her team used in-house stock of British worsted wools and military flannels from past seasons to create the Tailors' Quilt trouser suit, which is rendered in a black, gray, lilac and ivory palette. The geometric intarsia treatments are a nod to Williams' complex technique of using inlaid patchworks from thick cloth. Figurative motifs include doves, a panther, a horse and a leek.

Meanwhile, the single-breasted coat incorporates a swallow tail and is constructed in an embroidered patchwork of red, damson, ivory, grey, and black. The look is also upcycled from past season wools and military flannels. Similarly, Welsh tailors' quilts were made out of salvaged flannel taken from mill sample books, suits and military uniforms.

Below is the Wrexham Tailor's Quilt that started it all, built from 1842-1852 and on display at the St Fagans National Museum of History in Wales.