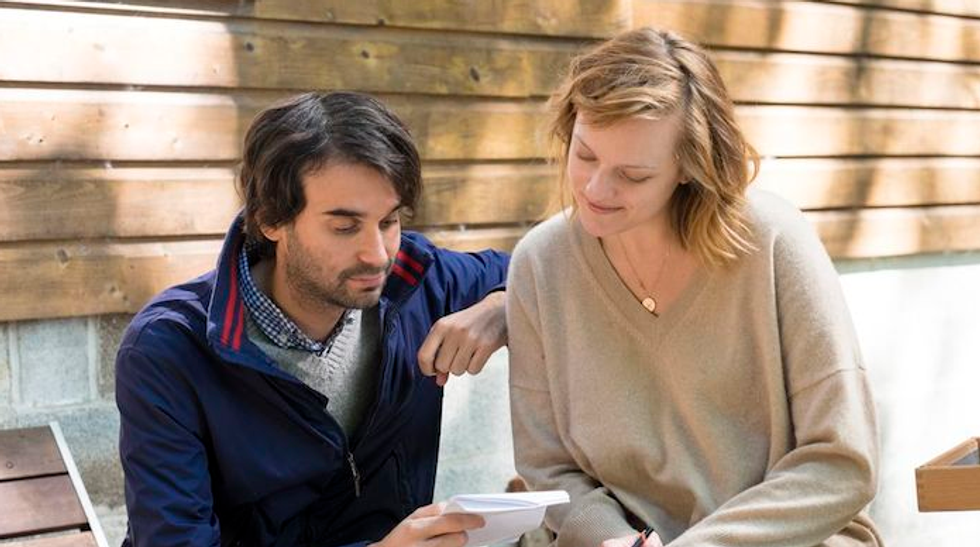 by Michael Tedder
PAPERMAG
Alex Ross Perry and Elisabeth Moss
Alex Ross Perry's new film Queen of Earth is a portrait of two friends growing apart, struggling to reconnect while vacationing together at a lake house, but ultimately unable to move past old resentments. At least, that's how the film starts.

But in one of the most unexpected narrative mutations in recent American cinema (extremely vague spoilers ahead, but seriously just go watch it for yourself), a character does something you absolutely don't see coming, a party gets unnervingly out of hand, and you're then left with an ending that actively refuses to resolve any of the questions that you have accumulated. It's the sort of late act twist that indicates you weren't watching the movie that you thought you were, but something much bolder and more ambitious.

The same could be said for your preconceptions about the writer-director behind all this. Not that completely upending the idea of an Alex Ross Perry film was his plan going in, mind you.

"There was a scene that made what is happening very explicit. But it was like, 'you know what would be more fun? Let's get out of this scene right here, let's skip the next scene and jump ahead in order to really make sure this is a mysterious moment,'" Perry says. "Most independent films would narratively copy the storytelling formula of the biggest Hollywood films and just be like 'Don't worry about it, let me tell you what's happening.' My instinct is to inch a little bit away from that."

Perry is sitting in the New York offices of IFC, sporting a light glaze of stubble and a chipper but not too-chipper attitude. A long afternoon of interviews alongside his star Elisabeth Moss, who just left the building, hasn't dampened his enthusiasm, and he's not even annoyed that someone brought him a chicken salad for lunch even though he specifically asked for something meat free. He's an urbane, witty guy known for making urbane, witty films, and he is here to talk about a mood piece-turned-psychological thriller that is quite sophisticated but most assuredly lacking in quips.

A crackling origin story isn't mandatory for a young filmmaker looking to establish a foothold, but it certainly helps, and Perry's is better than most. He moved from Pennsylvania to attend New York University's film program, and also worked as a clerk at the iconic cinephile hub Kim's Video, an experience that helped make him agnostic to genre snobbery. "You can take home a cheap Italian horror movie and a masterpiece of French cinema on the same night and watch them both, and each has its own experience," he says. "But to say that one is more valuable than the other, I don't agree with that and I don't plan to implement that in the movies that I want to make."

His first two features, 2009's Impolex and 2011's The Color Wheel, were made on the cheap, acclaimed by the critics who saw them and barely distributed outside of a handful of New York theaters and bittorrent sites. His third film, last year's Listen Up Philip, attracted not just national distribution but a high-profile cast and even better reviews, many of which used some variation on the term "Philip Roth-ian." It starred Jason Schwartzman as a difficult young novelist and Moss as his girlfriend who begins to realize that she deserves better, and it seemed to cement Perry as a filmmaker firmly in the witty, world-weary lineage of Woody Allen and Noah Baumbach.

Queen of Earth features no jokes, no ruminations on the indignities of urban life or the anxieties of the modern beta male. He insists that he wasn't consciously trying to avoid being pigeonholed with the tonal shifts of Queen of Earth, but it's a welcome side benefit.

"If this was my first movie and it was received well, and then I wanted to make a literary comedy, people would be like 'that doesn't make any sense'" he says. "It's just a challenge to myself to see if I had learned as much as I thought I had learned about making movies that I could do something fairly different than what I had made before. Can I put something very familiar inside of a totally different box, using a lot of these people that I trust and work with?

"I knew everyone else could pull this off," he says. "The only person who was at risk of failing to do this was me."

Queen of Earth, which also stars Katherine Waterston and a surprisingly unlikable Patrick Fugit ("I hope to have a whole career where I just endlessly prove I can take any actor and turn them into a repellant monster of a character"), was written in the aftermath of Philip premiering to rave reviews at Sundance. After more than a year of constant work to get his breakthrough off the ground, Perry wanted nothing more than some time alone. "I thought 'I've earned the right to sit at home and do nothing for the rest of the winter, and people said 'You didn't earn anything. You aren't entitled to your own privacy, you aren't the King of England.'"

The "difference between what you're saying you want and what you remotely could have" informed the journey of Moss' character, who claims she just wants to be left alone in the wake of a break-up and death in the family, but then immediately goes on a vacation with a difficult friend. As for why she does this, and what she might see or do later in the film, you'll have to figure it out on your own, as Perry refuses to make things easy on himself, his characters or his audience.

You could easily say that Moss' character is suffering from depression, but Perry would never say that himself, he says, because "Then it's just a factual movie, instead of a very mysterious movie that takes place in a sense of logic between real and fantasy, dreams and nightmares and all that stuff." He wanted to let the tone of the movie "be very neutral, instead of saying 'I've diagnosed this character. Here's what they have. Here's how you should treat them.' And most independent movies do say 'here's how you should treat these characters.' That's very uninteresting to me. The only characters I want to be that black and white about are superheroes."

It should be noted here that Perry's remarks should, in no way, be interpreted as a slam against superhero films. He's as liable to reference Roman Polanski and "Eastern European-style black humor" when discussing his film as he is to posit that "the subjective experience of what we're doing doesn't have to be any different than the subjective experience of the thrill ride you get from watching Mad Max." Perry loves himself some mainstream popcorn filmmaking, and if anything seems to hold it in higher esteem than the majority of current independent cinema, which he deems too safe and television-like.

"If I'm going to give a film 90 minutes of my time, there should be something to it that goes above and beyond what an episode of my favorite show does," he says. "A lot of people toiling in the trenches and making independent movies ... prefer to really manipulate you with their script and not even bother to take you on a ride with their camera. And for me, I want to manipulate you with the camera and let the script suggest things to you that are yours now."

This summer has seen two of the more young and adventurous voices in relatively low-budget cinema get promoted to the Hollywood big leagues with decidedly mixed results. Colin Trevorrow, who won raves for 2012's Safety Not Guaranteed, had one of the biggest hits of the summer in Jurassic World. Josh Trank, who won raves for 2012's Chronicle, had one of the biggest flops of the summer in Fantastic Four. For his part, Perry is currently "inching into that world" beyond just being an avid fan. Once the promotional tour for Queen of Earth wraps up, he will return to his Brooklyn apartment and get back to work on a script for a live action-remake of Winnie the Pooh that he is writing for Disney. Perhaps you find yourself surprised by this development. Perry does not. "I really felt from the very beginning, absolutely beyond a doubt, that I was the best person for this job."

The idea that independent cinema types are inherently obligated to sneer and renounce the mainstream world is an old and inaccurate one (Quentin Tarantino script-doctored The Rock and Crimson Tide and John Sayles wrote for Roger Corman, to name but two examples). But it's still an idea with enough institutional weight that, much like musical poptimists that love Taylor Swift and Godspeed You! Black Emperor with equal fervor, Perry feels emblematic of a new generation of filmmakers who are actively looking to deconstruct outdated binaries, and do away with the "90s idea," he says, of selling out.

The notion of selling out, he says, is "based on a system where there are opportunities to keep going without selling out. And that system doesn't really exist anymore. I could make three movies like Queen of Earth every year, and I wouldn't have enough money to live for more than four months. The system where an independent filmmaker doesn't, financially, chase bigger jobs really doesn't exist," he says. "At this point, everyone knows you gotta do what you gotta do, and they know with the diminishing audiences and the diminishing theatrical opportunities and just diminishing returns, everyone knows that from journalists to critics to filmmakers and musicians, if you're putting out stuff that you care about, you're scrapping by.

Perry is relaxed and confident in conversation, happy to discuss his aesthetic and commercial choices but never once hinting that he feels the need to justify them. Why should he feel bad about working for Disney, after all, when unlike many of his indie-minded peers, they can actually deliver on their end of the bargain?

"When I go see The Avengers I don't want to debate what the ending means for 90 minutes. I want to have a good time, I want to go for a ride with the superheroes and I want to watch stuff explode, and I buy a ticket and I have that experience and that's why those movies make hundreds of millions of dollars," he says. "On a certain kind of movie, that's exactly the experience that I love.

"But you buy a ticket for a film like this, the deal should be: challenge me."

Queen of Earth is playing at some of our nation's finest independent theaters and is also currently available on video on demand.
You May Also Like
Fashion