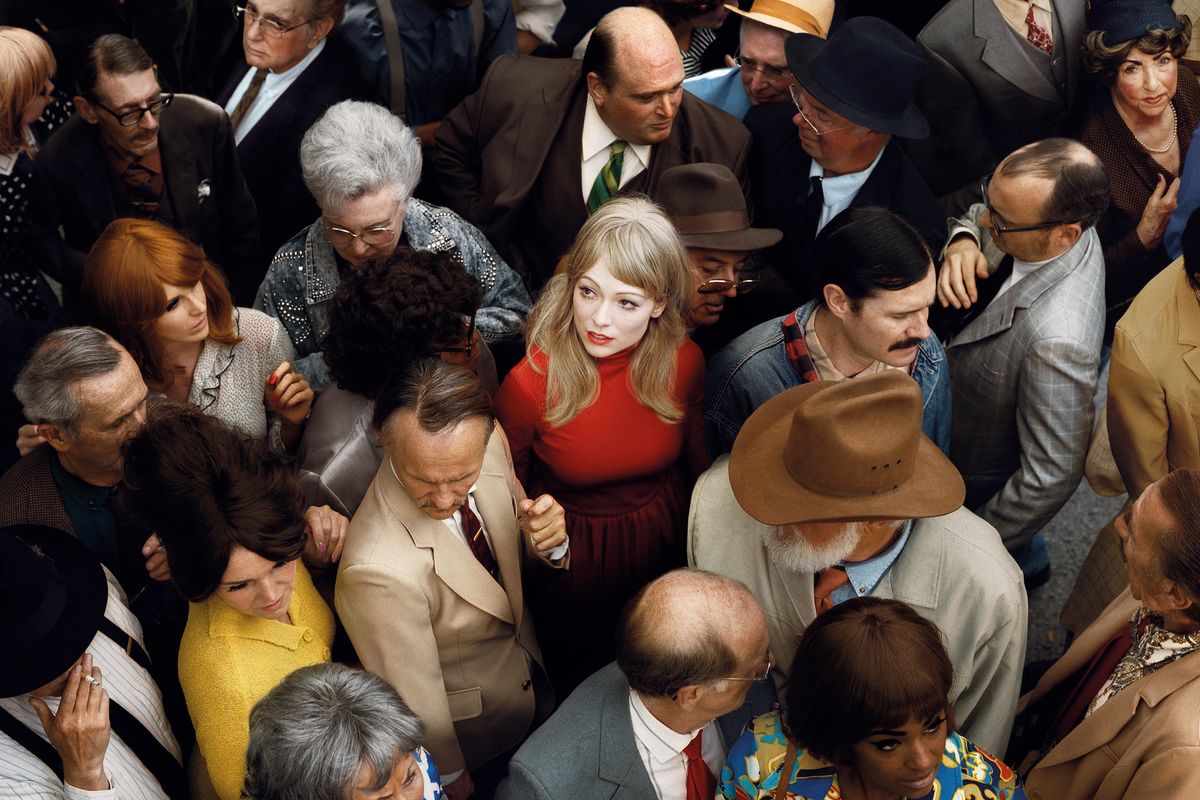 Through the eyes of photographer and filmmaker Alex Prager, everyday moments become almost supernatural. Her hyperrealistic photos simultaneously evoke feelings of curiosity and discomfort, as if we are looking at something we shouldn't be. This unsettling emotion is what has driven Prager to create the works seen in her book Silver Lake Drive, which takes a retrospective look at her decade-long career. "I won't make an image unless I feel scared to make it to some degree, challenged by something in it, terrified of the possibility of it," Prager says. "There has to be something in it that makes me feel many different ways, and most of all, want to run the other direction."

Born and raised in LA, Prager had friends who were actors, so she became engulfed by the movie business, knowing what craft service was by the time she was eight years old. Her exposure to the entertainment industry undoubtedly had an effect on her work, forging Prager's uncanny ability to take a scene from seemingly everyday life and put it under a stylized magnifying glass. In an interview with PAPER, Prager talks about growing up in LA, her career as a self-taught photographer, and why this was the perfect time for her to come out with a book.

Was there ever a moment where you wished you grew up somewhere else besides LA?

No. The thing about Los Angeles is it's very easy to think that you never need to leave, because you have the mountains on one side, you have the sea on the other, and you have an entire city in between that has, basically, whatever you're looking for. A lot of people go there to create their own being-ness. Whatever they imagine they want their life to be, it can be made and created in Los Angeles. So, it very much has that feel of the Wild West still, in a way, and you go there with certain expectations of what you want to become, or what you want to be. I think that's the dangerous part of the city, because a lot of what happens there is created, but on a short term basis, whether for the film industry or other short term reasons. It can have an affect on people around it that don't necessarily think of it as short term, that this is a longer term city. It's a city constantly in transition to me. Less so than other cities. I just spent seven weeks in London, and I'm constantly reminded how much more solid other cities feel to me. They feel very grounded and in place, and there's rules to this city; there's agreements amongst city dwellers. You really feel that in the architecture, you feel it in the planning of the city. Los Angeles never had that. It was literally a bunch of entrepreneurs and gypsies and people that wanted to live a different life coming to California for gold or for stardom. To get away from something. It still kind of has all of that romance for me, but I luckily started traveling from a really young age so I was exposed to other parts of the world early on. I think that's really important for anyone that grows up in Los Angeles or lives in Los Angeles. I think the best part of Los Angeles is when you leave and then come back, because I always appreciate it more when I come back.

Why did you to decide to call your book Silver Lake Drive?

One of the photographs in there from "Compulsion" is "Silver Lake Drive." It was around the time that I started making props. I made a papier-mâché boulder with my sister for that shot. That was right around the time that I started really looking at this distorted reality, and how to bring an artifice into the real world, and these worlds that I was creating, and that line between reality and fiction. I felt like that series "Compulsion" was where that really started making a lot of sense for me. I started exploring that on another level. Also, I've made most of my pictures in or around Silver Lake and Silver Lake Drive. I grew up in Los Feliz, but I moved to Silver Lake 12 or 13 years ago, and my studio has been in Silver Lake. It just made a lot of sense when I started thinking about all the reasons and my book needed a name. I wasn't going to call it "Alex Prager: 2007 to 2017," because it sounds like I died or something.

Why did you decide to make the book now?

When I have a finished photograph or series or film, and I'm able to share it with people, and I make it the way that I intended it to be, then I feel like I've accomplished something. I'd been wanting to make a book for several years, but it just never really felt like the right time. By the time I made [the film] La Grande Sortie, I suddenly looked at the work that I'd started making in '07, and I shot La Grande Sortie in 2017. Not only was it exactly 10 years of work, but I felt like the motion that I'd started with had reached some kind of new chapter or new thought. So it felt like the exact right time.

How did you get your start in photography?

I saw a William Eggleston exhibition at The Getty, and as far as I knew, I'd consciously never seen photography being used as art before that. I'd only seen it being used as fashion or advertising. So when I saw his photographs, I was completely struck by how emotional I felt looking at something that seemed to be ordinary, like a snapshot of a scene in the south. The only time I'd ever felt anything similar was when I'd looked at paintings like Toulouse-Lautrec or Cézanne. These photographs were making me feel a certain way, but yet it didn't make sense to me. It felt like magic. Within the same week of seeing William Eggleston's photographs, I bought a camera and darkroom equipment on eBay, and I started processing and printing my own pictures. I'd never had a camera or thought about photography before that.

So you're self-taught, then?

Yeah. I looked into some art schools, because that was the thing that you were supposed to do next. But when I got to that part, I realized that I was way too impatient and eager to get started making the images that I was seeing in my head. I wanted to just get right to it and I thought that school was going to slow me down and kill my enthusiasm. I'd found the thing I'd been looking for without even really realizing. I'd finally found the thing that I was going to funnel all of this energy into, and I was excited, and invigorated by the idea of doing that.

Were you set on being a photographer, or did you ever leave and come back to it?

Yeah, it was never a question. Looking back, all I can remember is how excited I was by not only making images, but showing them and getting a response. Without the response part, I might have started questioning what I was doing, because I can get really in my head about things. And that's a lot of what my work is about, how the mind can distort one's reality, especially if there is a negative thing happening. I remember how invigorating it felt to have an idea, and then create that idea in a way that it could become accessible for other people to see what I had in my head. And then see how people responded and gave back to that idea with their own stories, or even if they really disliked it. I was getting reactions and responses and conversation was taking place around these images that I was making, and I really loved that cycle.

Would you say that that's the underlying goal with your work? You want to make art so other people would be able to see what's in your head, or do you want them to feel a certain way?

I definitely want them to feel something. I want people to leave feeling something that wasn't there before, or that they hadn't walked into the gallery with. For me, I think it's best when it hits a personal chord within someone, because that's the kind of art that I respond to. If they walk away feeling different, then I think that's a successful visit to the gallery.

What are some of the weirder places that you've had photoshoots in?

There have been many weird places because for the first half of my career I was shooting wherever I could get away with it, and I didn't have to get a permit or anything. I shot at the DMV, on a public bus, in the waters of Brighton Beach, in the Thames River in London. I did one of my exhibitions in a motel, and they could only rent it to us for four hours, because they made more money off their regular customers.