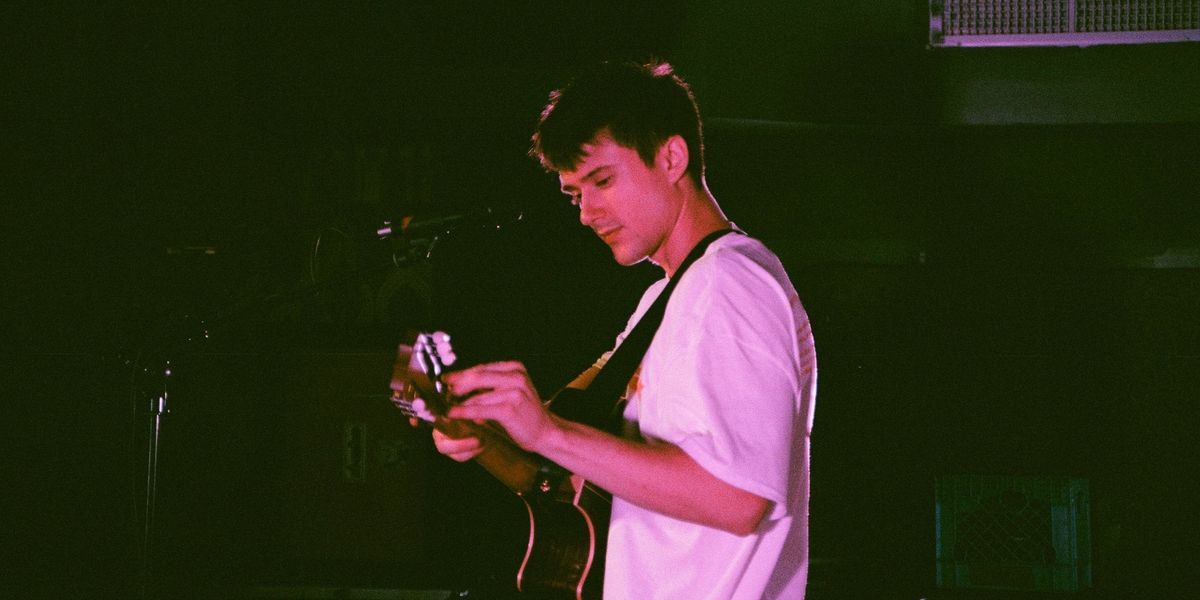 Meet Alec Benjamin, the 24-year-old singer-songwriter whose lyrics standout in the sea of same-sounding tracks that often circulate around the pop sphere. With a plethora of hit singles under his belt including "Let Me Down Slowly" and "If We Have Each Other," the Scottsdale-bred star has already proven himself through his ability to marry a customized lo-fi sound and infectious melodies with his sagacious narratives about life's hardships.

It's with no coincidence that all of his songs are emotionally fraught. Benjamin strives to create an engaging experience for his fans by using his lyrics to tell a story while infusing each song with raw emotion—covering everything from the pang of losing hope in childhood heroes to a dorm room heartbreak, and everything in-between.

The artist initially cultivated a fanbase on YouTube, and has quickly covered a lot of ground from making videos. Bejnamin recently opened for Camila Cabello, has over 50 million global streams on Spotify and can claim ten out of seventeen sold-out tour dates so far.

Still, Benjamin's journey has not been without its challenges. Dropped by Columbia Records just 24 hours after submitting his first album, he was faced with the challenge of re-building his brand by himself, which for him, meant taking his talents abroad. The then 18-year-old traveled to Europe and hosted "parking lot shows" outside of concert venues where popular artists (like Shawn Mendes and Troye Sivan) were scheduled to perform. Fast forward a few months and about a dozen self-made YouTube videos later, he caught the attention of "All Time Low" singer Jon Bellion. Benjamin then found success in songwriting while assisting Bellion in the creation of "New York Soul (Part II)," a homage to Jon's original "New York Soul" found from 2016's The Human Condition.

Now, hot off the heels of the release of his three new singles, including his most recent "Death of a Hero" (August 23), the singer is back in Los Angeles, taking time to prep for his upcoming tour in November. PAPER caught up with Benjamin to chat about music, the tour and the benefits of perseverance:

Did you always want a career in music?

I got into music late into high school. I didn't have anything else going on, so I was looking for a hobby. I started getting into music right around the time YouTube was becoming popular, when everyone was singing cover songs—it was like the era of the YouTube cover artists. I was like, 'Oh, that's cool, but I don't really want to do that.' So, I learned how to play guitar on YouTube and started learning how to write songs and then started writing my own, because I didn't want to sing other people's music. That's kind of how it started, and then I kept doing it and then at the end of high school, I decided that I wanted to do this for a living because I really like it.

What was your experience like when you first started recording music and releasing it out to the public? Was it solely via YouTube or were there other social media channels?

When I was in high school, I didn't really know how to get started into music and that was during the time period where social media was just starting to take off. When I first started making music, Instagram didn't exist and Facebook was pretty new, people were still on Myspace and were starting to transition from Myspace to Facebook. So, the first era of bands that started a following on the internet were through Myspace for Warped Tour stuff. Before that everything was still on CDs.

My sister actually encouraged me to get on social. She was into that Warped Tour and social media scene and I was like, nah. [Social media] came later for me; I like music more than I like being on the internet. I started sending cold emails of music to random songwriters, and then I met this songwriter in the UK and started going back and forth. At the end of high school in Arizona and early college from California I was writing songs, and then I got signed to Columbia Records. I made a whole album and then I got dropped and had to start over again. In 2015-16 is when I really started to focus on building a fan base and that's when I started putting music out on my own. I started taking Instagram, YouTube, and Twitter seriously at the end of 2016.

Where do you draw influences from?

I listen to a lot of different kinds of music, and I believe every genre has something interesting to bring to the table. There are certain things each genre does best. Growing up, some of my favorite artists were Jason Mraz and John Mayer and then through that, I got into Paul Simon. But I also listen to a lot of heavy metal, like Slipknot. I listen to the Red Hot Chili Peppers but also listen to straight pop music like Katy Perry; I was a big fan of hers but I wasn't like going to shows or anything like that but I think she has great music. I feel like the hook in other pop songs is always something I can learn from and get inspired by. I listen to some country too; I think country is great for telling stories, but my all-time favorites are Eminem, Paul Simon, Jason Mraz and John Mayer. I love Eminem because I love his words. I like music that has something important to say, there are so many things that happen in life, so I'm into songs that hold a specific meaning.

How do you think your audience resonates with you and your music/lyrics?

To be honest, I am just kind of finding that out now. I am just out and am just starting to do shows and go on tour. I feel like the best way I am going to figure that out is to continuously go in front of people and see them in person. I'm not really sure yet, but the thing I think resonates most with them is my lyrics—that's what I hope at least.

Leading up to your upcoming tour, do you have any hopes, fears or desires?

It's so new to me and there are so many things that go into running a tour, I don't even know what to be scared about yet. If things do come up and we run into difficulties, we will be afraid then, but for now, I'm just excited.

I'm always writings songs, I never really stop so I'm doing that. I have a new song that just came out called "Death of a Hero" after that maybe an another single and then a mixtape after that. Hopefully, an album at the beginning of next year. I'm definitely going to keep writing and keep putting music out, now there's a dialogue with the people that listen to my music, so I want to continue to give them that.