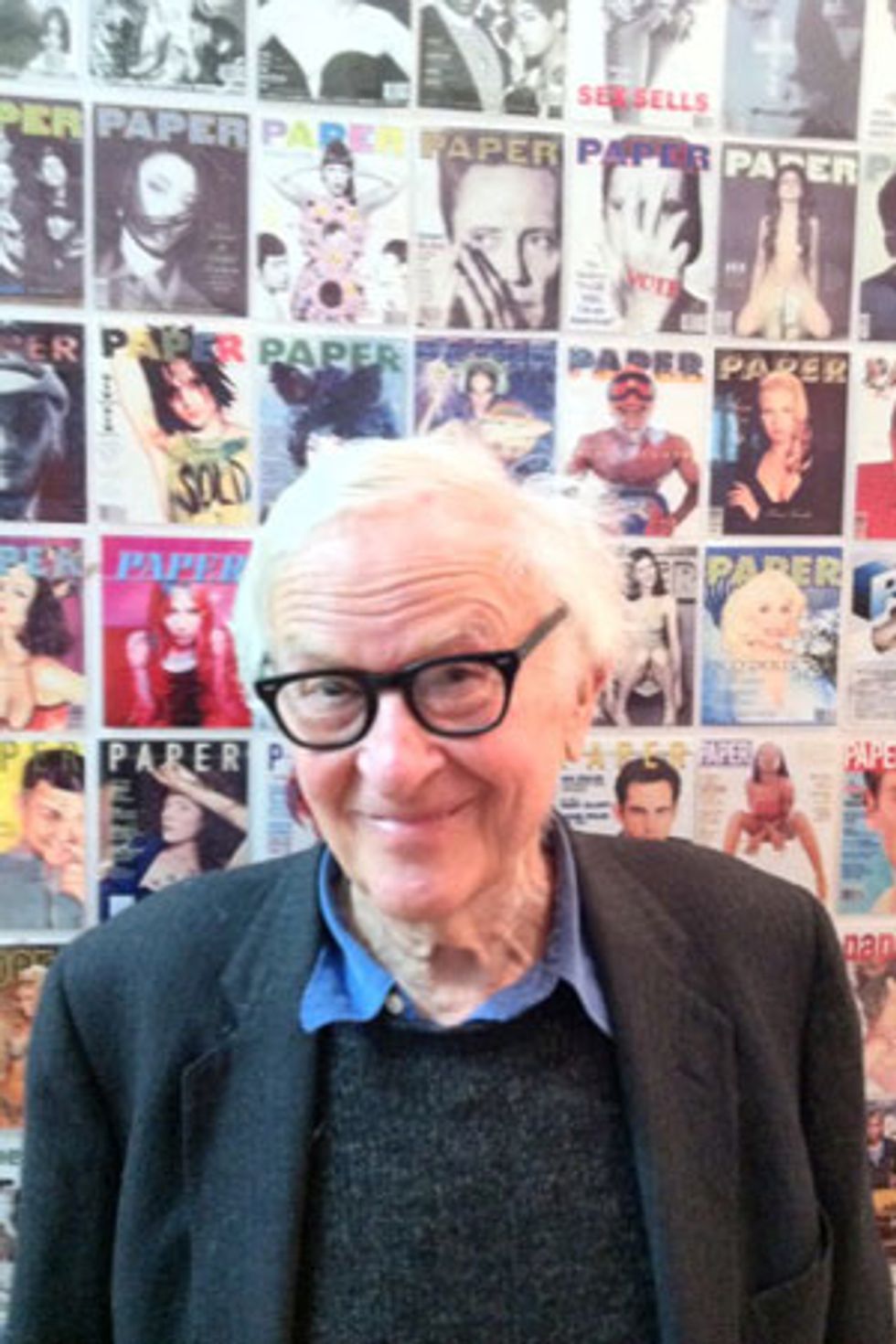 Albert Maysles On His New Projects, Making His "Dream Movie" and Grey Gardens

by Elizabeth Thompson
PAPERMAG
Photo by Paul Porter/BFAnyc.com
3/6/15: We at Paper were saddened to hear of the death of pioneering documentary filmmaker Albert Maysles today. In celebration of his life and work, which included the seminal Grey Gardens, we're re-publishing some of our interviews with Maysles from the archives. The below Q&A was originally published online on January 10th, 2011.


Legendary documentary filmmaker Albert Maysles stopped by the PAPER offices on Friday and was kind of enough to have a chat with PAPERMAG. Maysles, who is kicking around the idea of making short films about some of PAPER editor Kim Hastreiter's friends, has several projects on the horizon. Most of them are still top-secret, but he does have a short film based on a track off R.E.M.'s new album, Collapse Into Now, in the works, as well as a movie consisting entirely of children interviewing each other. Below, Maysles talks to us about that project, Grey Gardens as a gay cult classic and what he wants to work on next.


You have the R.E.M. project and a couple of other big films coming up that are still under wraps. What else have you been working on lately that you can tell us about?

I'm making a movie featuring pairs of kids, around age six or so, chatting with each other. I just sit in on their conversations and see what they have to say.

What made you want to work with kids?

Well, one moment of inspiration occurred many years ago when my daughter was four and I took her to pick up the New York Times one night. We got to the newsstand and the paper hadn't arrived yet, and she turned to me and said, "Daddy, the paper's not ready because the people haven't been killed yet." Kids come up with the most beautiful ideas and can express them so uniquely.

It's so much better than putting just a camera on one person as an interview. Because these kids are of the same age they spark one another. I've already filmed 10 couples and then I'll probably do another 10.

What do kids tend to want to talk to each other about?

They talk about what they want to be when they grow up. During the election I filmed a couple of kids -- a girl who was six and a boy who was four -- and they were talking about voting. The boy turned to the girl and said, "You know, we could stop war. If only people would vote."


And that will be out next year?

Yes. And, going on from there, we've been talking to Kim [Hastreiter] about maybe doing a series of half-hour or hour-long portraits of her friends. She knows the most interesting people.

Is there any of her friends you're specifically interested in?

Well, Marcus Samulesson. I just had lunch at his new restaurant in Harlem, the Red Rooster. I think there's a film there. He's so special.

I had lunch at his restaurant today. Here it was snowing fiercely outside, it was the middle of the afternoon on a weekday, everyone had already had their lunch, and yet the place was packed. I got to talk to the people next to me. It was a table of three, and two of the people were locals from the neighborhood. Really interesting people. One of them turned out to be from Venezuela and we talked about Oliver Stone's film about Hugo Chavez, South of the Border, which I worked on. It was one of those coincidental, exciting events that happen in our lives.

Well, it's interesting you say 'New York moment.' That's another film we're working on. We're calling it New York Secrets. It's about all of the things going on in New York that you don't always know about. There are so many special things that take place here that are unbeknown to us. Like when they had all of those pianos installed around the city? And people could come up and play them? We drove around and filmed that, because that's something that can only happen in New York.

What else will New York Secrets feature?

I filmed Ramadan in Brooklyn. We went and filmed this Muslim man who plays drums at four o'clock in the morning on Ramadan so people will wake up and have breakfast before the rest of the day, when they're required to fast. That was beautiful.

Do you have any projects coming out of the Maysles Institute that you're looking forward to?

Well, we're probably going to change the name from Maysles Institute to "Center for Documentary Filmmaking." We're doing that for two reasons: One, we're the only theater in the city -- we have a 60-seat theater -- that only shows documentaries. And, two, because we're teaching kids how to make their own films. And it was so exciting last year, we had a graduating class of a dozen, ages eight to 12. They did a wonderful job making their own films, and we showed them to a full-house audience, and then we did a Q&A. One of the people in the audience asked the kids, 'Are any of you planning to make a career out of filmmaking,' and all 12 of them raised their hands. It was such an exciting and wonderful thing for all of us who do this work to see.

When did you know you wanted to start making documentaries?

Well, I was already a psychologist. I was teaching psychology at Boston University and we had the summer off and I went to Russia and made my first film in a mental hospital there. I got so excited about the possibilities of both passing on the experiences of the people in the film as well as introducing them to a world who would never otherwise get to know anyone like that. I wanted to enter the lives of people in a very informal but private fashion. And, through that process, I wanted to humanize these individuals and thereby make the viewer all the more humanized. We need to know one another as we really are.

Is that your main intention when you make a film? To introduce your audience to people they would otherwise never meet?

Yes. For example, with my kids project, we might know a little of our grandchildren and their ideas and their ways of expressing things, but to see a whole film of children beautifully expounding on their experiences? That's something to remember and to talk about.

With Grey Gardens the outside world already knew the Beales and had an idea of them, but maybe it wasn't one that was positive?

Well, as it turned out, the movie was their dream come true. Through the film, they could engage with the world without leaving their home. In fact, I believe that dynamic induced a whole viewership of special people. I think that movie has earned a special gay viewership because these two women "came out," so to speak. And they did it successfully. They didn't lose any of their character.

Is there a movie that's still your dream movie to make? That you haven't been able to do for whatever reason?

Well, there's one, but it requires so much travel and is going to be so expensive to make. I call it In Transit. I'll get on long-distance trains in China, Australia, Western Europe, South America and Africa, and I'll walk through the train looking for someone who I think may have a story. Then, when it's time for them to get off the train, I'll get off with them and start filming. I was on a train in Pennsylvania, and this woman got on in Pittsburgh. She had two kids with her and was 26 and, right away, she had to tell me why she was on the train. When she was three her family broke up. It was an ugly divorce and she had never seen her mother again after that. After all of those 23 years, she had just gotten a call from a woman in Philadelphia saying, "I'm your mother. Get on the next train. Meet me at the train station." So I filmed her getting off in Philadelphia and, as she was about to go up the stairs into the station, there was already a woman waiting there at the top of the stairs. She flung open her arms and rushed down the stairs and they embraced and talked for a bit. Then the mother turned to me and said, "Isn't she gorgeous?" It's that sort of stuff, that humanizing stuff, that I think is so worthwhile and so satisfying as a filmmaker.

Are there any differences you come across when you're filming people outside of the U.S.?

It's the same thing. People are people. We all share common ground, and I don't know of anything more important than that. I couldn't see people going to war, then, if they knew even one or two families in Iraq. They would say, "Oh no, we can't put them in danger."

Have you seen any documentaries recently that you really loved?

I saw a film, In Search of Pitt Street, just the other day that my son showed me. It's made by Nina Rosenblum. It's a film about her father, Walter, who is a photographer, and his life and work. It illustrated the point that the more personal a film is, the more powerful it becomes. It was all behind-the-scenes footage and she obviously has a great deal of love for her father, and her father is clearly someone who is a loving person himself. You can't help but love the film and the people in it. To me, that word -- "love" -- is the love of my life. That word, wherever it exists, I think we should get to know it.