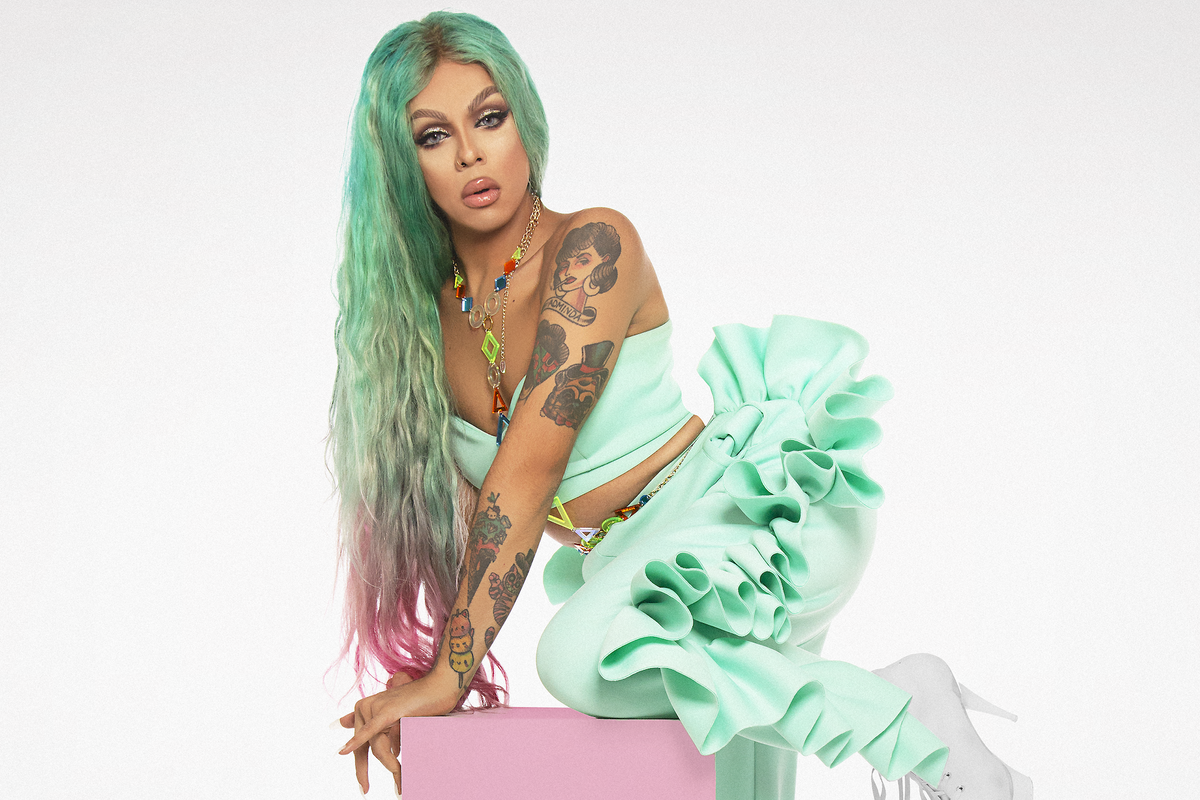 Aja Battles Their Demons on 'Jekyll and Hyde'

Brooklyn rapper and Drag Race alum Aja proved they could rap as well as they can stunt on their debut EP In My Feelings and with tracks like "Brujería" and "Demons, Witches and Bitches." They're a star on the runway, but they've made it clear that their ultimate passion is music. Aja will release their debut album, Box Office, on February 7: a furious collection of bangers featuring CupcakKe, Rico Nasty and more, that delves deep into their experiences as an adopted Black, Arab and queer creator.

We heard the album's first single "Jekyll and Hyde" earlier this month: a litany of audacious flexes, punching wordplay, and incisive introspection, all delivered in Aja's vicious flow. Aja is "a ticking time bomb ready to explode" and a combustible fusion of two selves. These selves, the swaggering Aja who flexes gleefully about "These offers I'm turning down" goes to war with the other Aja, who's manically worried about failure and can't tune out haters.

On the eve of the album's release, PAPER is premiering the campy, horror-inspired visual for "Jekyll and "Hyde." The duality that Aja grapples with on the song is brought to life by the characters they play in the video: a pastiche of psycho-thriller tropes. Aja stars as a mad scientist, a witchy femme fatale, a pope mid-exorcism, and a therapist dishing out diagnoses. They trade rhymes with themself, as they switch from role to role. They're joined by Kansas City rapper Shilow, who assists on the verses and plays Aja's victims in the melodramatic scenes, which toy with notions of good and evil, power and victimhood.

"The video is supposed to dig deep into the minds of your conscious soul and tackle the idea of sadism and masochism. Not in a sexual way, but in an everyday 'Jekyll & Hyde' style manipulation game" says Aja. "In essence, the video is a metaphor about our everyday lives and trying to fight the good battle of positivity versus negativity. It's this theme of duality. There is no clear winner but we do realize no good fight is ever won without losing a little. The song itself was a nod to me battling my inner self while dealing with social media opinions and things people would say about me."

Aja and Shilow's musical chemistry is evident in the song, but it's not their first collaboration: "I discovered Shilow when he reached out to me for a feature on their EP in 2018. I look at him as the first rapper who gave me a chance and recognized me as an artist and believed in me. A lot of people doubt my abilities but Shilow has always encouraged me to be a better rapper. Shilow was the only person I know could have delivered such a sick verse for this song."

The rapper also explains that the dark aesthetics and personal themes of "Jekyll and Hyde" are setting the tone for Box Office.

"I'm departing from this "Kawaii" aesthetic that was popular during the In My Feelings moment. Box Office is indeed way more about me as a person and every song has its own feel and vibe. I wanted the video to be true to the song. I'm trying less to capture the viewer's eye through vivid colors and a young aesthetic but rather through the lyrical content and how it relates to the imagery."

Check out "Jekyll and Hyde" below and stay tuned for Box Office, out February 7: