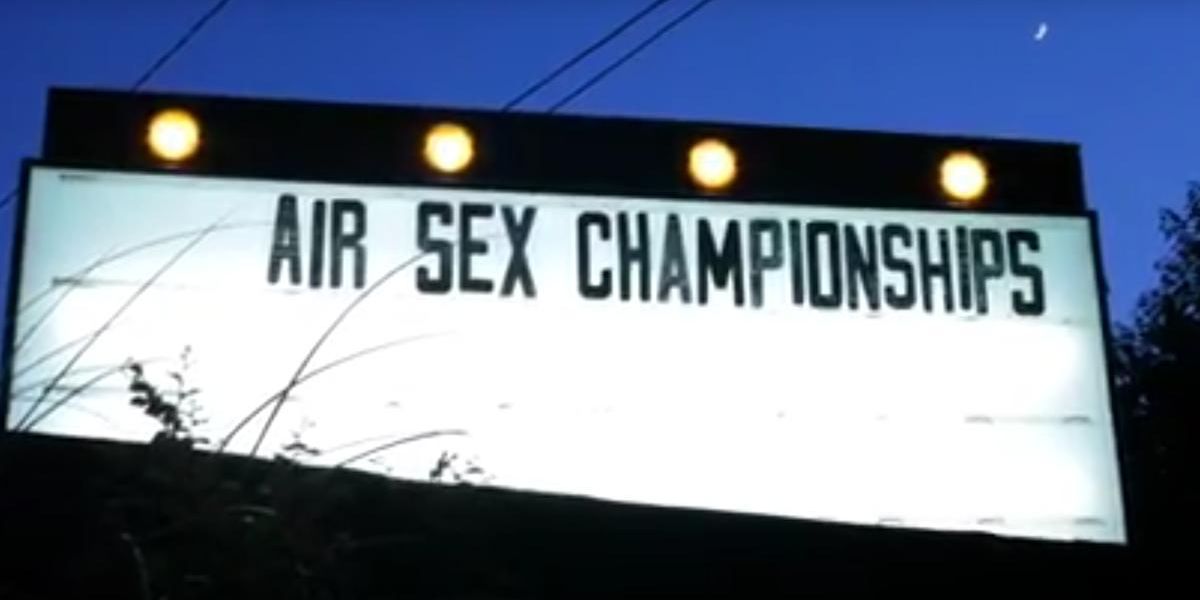 "This is not a fucking game, people. This is the most prestigious sport in the history of the world," comedian Chris Trew announced as he opened the seventh annual New York City Air Sex Championships at the Cutting Room on Friday. Yes, you heard us right: air sex, the simulation of sex using just a few props and one or more imaginary partners somewhere in the air.

Trew, one of Paper's 10 Comedians You Need to Know, went on to outline two important ground rules: "all climaxes must be simulated" and "as long as you're fucking an invisible thing, we don't care -- we just don't want to see it." He then performed his signature air sex routine, which he once took to the America's Got Talent auditions, whipping out a headband midway through to contain his hair during simulated oral sex.


Trew performing his routine on America's Got Talent

The comedic competition was born in Austin, TX on Valentine's Day of 2007, when Trew first performed air sex as a parody of air guitar. The act took off, and the annual championships started touring the country in 2009. Last year's New York champion, Tootnanny, made an appearance Friday with his champion belt and winning performance, which includes removing a tampon from an imaginary sexual partner and inserting a new one using his mouth. "What a feminist hero!" judge Farah Brook applauded him.

Tootnanny was among eight air sex competitors, known as "airsexuals," including a man who danced shirtless to Hanson's "MMMBop" with upward thrusts from the reverse table position, a woman who stripped out of an old lady costume complete with a walker, another known as the Green Royale who mimed snorting a line of coke off a penis, a man called "Juanstoppable" who left the audience speechless with a disturbing prison scene, and another known as "Clit Commander" whose elaborate story line involved paying a dominatrix "500 bucks to beat the living shit out of me." A panel of five judges provided enthusiastic commentary after each performance and chose three finalists to improvise air sex routines to Miley Cyrus' "Wrecking Ball."

The ultimate winner, with the loudest audience applause of the three finalists, was Flash (pictured in the middle, above), a young man who simulated digital sex with the ecstatic hand motions of a concert pianist, the facial expression of a child on Christmas morning, and a move judge Lisa Friedrich referred to as "pussy billiards." Flash will go on to compete in the Air Sex National Championships in Austin this December.

"I love how polished the show is as an event, and how flexible the whole thing is," Trew told us. "In a strange way, it's also educational."

For those seeking an opportunity to get in on with an invisible partner in front of a crowd, the contest is open to anyone, Trew said. "Some were born to do it. Others feel it the night of the show. A few need a little extra motivation from their friends. All involved have a good time and often learn a lot about themselves."

Or if you just want to learn what air sex is all about, there's a documentary dedicated to the sport/art/comedy extravaganza called Air Sex: The Movie.

"Air Sex is sex positive, weird, interesting, and most importantly, funny," Trew said. And whether the routines are arousing, amusing, or just alarming, the spectacle is great for anyone looking to, um, come for a good time.


Related Articles Around the Web
You May Also Like
Fashion