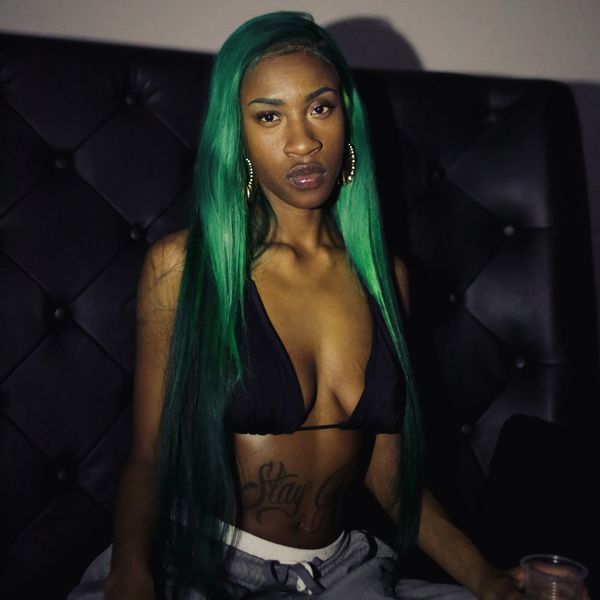 Ahsh Eff Cleans Out the Competition with Her 'Tongue Ring'

If there was ever a rapper on the rise, it's New York's Ahsh Eff. The young MC is poised to give some of the city's finest hip-hop exports a run for their money, incorporating the very best of her predecessors: the hard, near-flawless flow of Remy Ma, the crass of Cardi B and Nicki Minaj's expert lyricism.

Impressively, the young star-in-the-making is yet to release a full-length project, dropping instead a compilation of singles that wouldn't go amiss among the summer's biggest bops. The video accompaniment to her latest, "Tongue Ring," adheres to Ahsh's titillating trajectory, featuring a diamanté-clad dancer grinding on the pole. Be aware, the visual is not for the faint-hearted nor the epileptic-inclined, but if you're looking for the next video to add to the queue at your next grungy warehouse party, "Tongue Ring" is everything you need and more. There's no question the rap sensation is one to keep tabs on, and her music a tab to keep open at all times.

Check it out and read our chat with Ahsh Eff, below.

Walk me through formulating the video's concept and the creative process behind its production.

"Tongue Ring" was something spontaneous and unexpected. When I recorded the track I just decided that I wanted to show a more sexually free side of myself and be less nervous. I can't dance for shit, so my friend/teammate Kiva, who is a phenomenal dancer (not exotic) was able to perfectly tell the story for me. I took a backseat and directed the video along side Haitian Picasso. Then I had my boy Rah who is an amazing artist, go in and listen to the song, watch the rough footage and put that fucking sauce on it like what you see on your screen.

The track definitely has a subtly feminist message, do you feel it's important to get political in your music given the current climate?

To be honest I didn't intend it to have a feminist angle. We are humans, and humans be on some nasty shit. I guess it could be seen as political since woman are frowned upon for expressing such freedom. But, realistically I feel like I'm just being myself and making shit that I like and hoping it helps to make that freedom more normal.

Tell me your thoughts on the state of female rap. What would you love to see more or less of?

I see good or bad, flawless or trash... The climate is shifting and becoming more open to things that aren't the ordinary and I like that. One thing I would like to see less of is a gender separation in rap, if you're good you should be good. If you're trash you should be trash; boy, girl, queer, trans, anything. You don't call a man who raps a Male Rapper, right?

How would you describe your musical evolution?

I could best describe my musical evolution like The Simpsons or Law and Order. One of them shows that never ends. Like you been seeing new episodes of both of them since you were like 8 and now you like 75 and you got mad kids and even though the show is something familiar to you, your kids gonna watch it and without even knowing it's been around forever say to you "damn this is a good show."

What do you have on the horizon that you're particularly excited about?

Videos and projects! I haven't released any actual project (besides a compilation of singles available on iTunes, go get that hoe!) so I'm really hyped about that. I have one already finished and working on something else. The whole process is fun, annoying, fruitful and sometimes stressful as hell but I'm happy and when I'm able to present to the world I'm going to feel like I really worked for it.