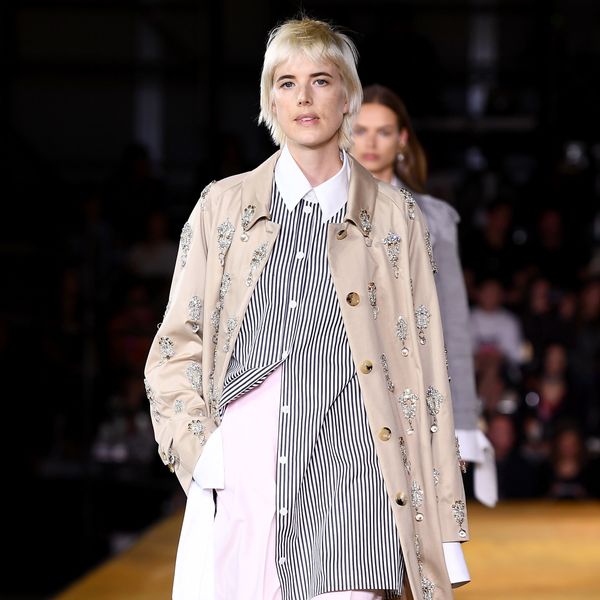 Agyness Deyn has made a triumphant return to the runway. At Riccardo Tisci's Spring 2020 Burberry show, the 36-year-old model-slash-actress walked for the first time since a Saint Laurent show in 2015. The Burberry show also included appearances from other 2000s favorites like Sasha Pivovarova and Freja Beha Erichsen (but unlike Deyn, they've been consistently modeling for years now). Icons only!

The Burberry runway also featured an appearance from a newly-blonde Kendall Jenner, who declined to walk any runways in New York this season. But we were especially excited to see Deyn, who has mostly given up modeling in favor of acting (she recently appeared in 2018's fantastic, underrated punk epic Her Smell, and has also starred in the Cohen Brother's Hail, Caesar and the miniseries Hard Sun). Back in the halcyon days of the mid-aughts, she was everywhere, walking runways for every top designer: Versace, Celine, Moschino, Chanel, etc. Her style and haircut and rock star boyfriends were dissected relentlessly.

But Deyn officially gave up modeling in the 2010s — though she did walk for Alexander Wang in 2011, solely because the designer bravely killed a giant cockroach in the model's Coachella rental house. "I suppose I have stopped modeling officially. I've not done any for a good long while now," she told the Independent in 2012. "I think it was about four years ago when my feelings were changing towards the industry. I didn't hate it, but I was yearning to do something different. I was on a gradient. It was a gradual thing."

At Burberry today, Deyn was still sporting her trademark bleach-blonde hair and choppy pixie cut. She was clad in a classic Burberry trench embellished with crystals, a button-down and trousers underneath. We were were glad to see her.