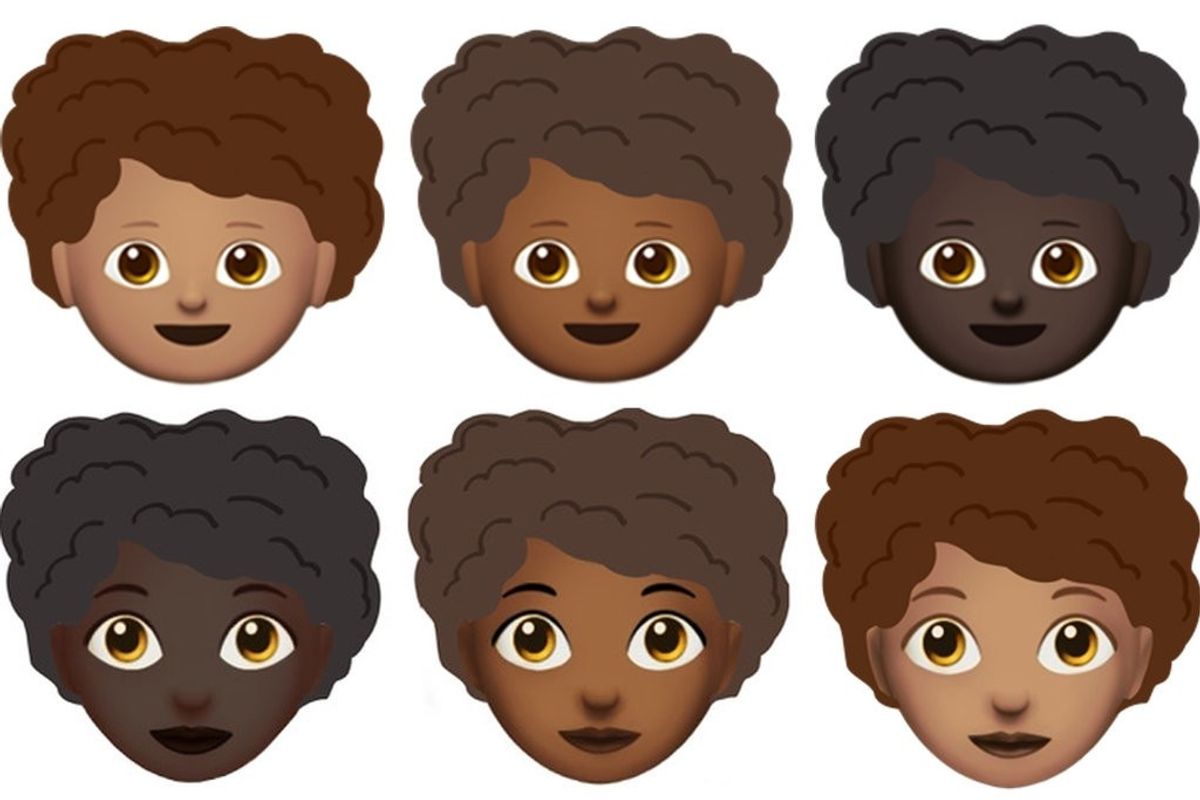 Support This Campaign for Afro Emojis

Emojis are slowly, slowly getting more representative of real life. Recent updates have included hijabs, period blood, sign language, hearing aids, and mixed race couples of various gender pairings. Also a cute sloth. The next big update? It should be natural Black hair, according to a new Change.org campaign organized by Rhianna Jones and Kerrilyn Gibson.

Jones and Gibson are submitting an official Afro emoji proposal to Unicode, the organization responsible for creating universal text symbols across different online platforms. They'll do this at the end of this month, and if their proposal is accepted then Unicode could include Afro emojis in its 2020 round. About 70 new emoji designs are accepted each year, according to the New York Times.

Jones explained how the campaign came together in an email to PAPER. "I'd been subconsciously dreaming about the Afromoji for a while," she said. "I'd always text/email *insert afromoji here* as a signature, and two weeks ago it just clicked. I had been binging Solange's new album, coming off Black History Month, celebrating our big hair and big stories, and frankly was just over the lack of representation. I did a little research on the emoji proposal process and decided to do it myself." Jones then enlisted the skills of Gibson, a graphic designer, to create Afromoji prototypes.

Jones added that an Afro emoji is long overdue: "Emoji are a universal language of self expression, and many users like myself don't have a single option that reflect our hair or cultural identities. It's really bigger than an emoji. It's an entire culture being neglected in these digital spaces. Ultimately I would like to spark a larger conversation about the lack of natural hair representation in the media. We've got a generation of kids growing up on screens who deserve to see themselves. We interact as much in these digital spaces as IRL. Our conversations should be reflective of the culturally inclusive times."

The campaign notes that tech companies have historically failed at accurately representing natural hair on their platforms. "Many people felt the original 'curly hair emoji' was misrepresentative of Afro hair," said Jones. "It's really a textural issue. Afro hair is incredibly multi-textural, and like our culture, comes in many shapes, colors and volumes. As such, it would be difficult for any singular design to encompass all that flyness. However, afros are kinky, gravity defying and take up space. Our designs reflects that." We agree!

It takes a while for Unicode to implement emoji updates, but Change.org campaigns have historically been successful in pushing for more inclusive texting symbols. So take five minutes to sign the petition, here.