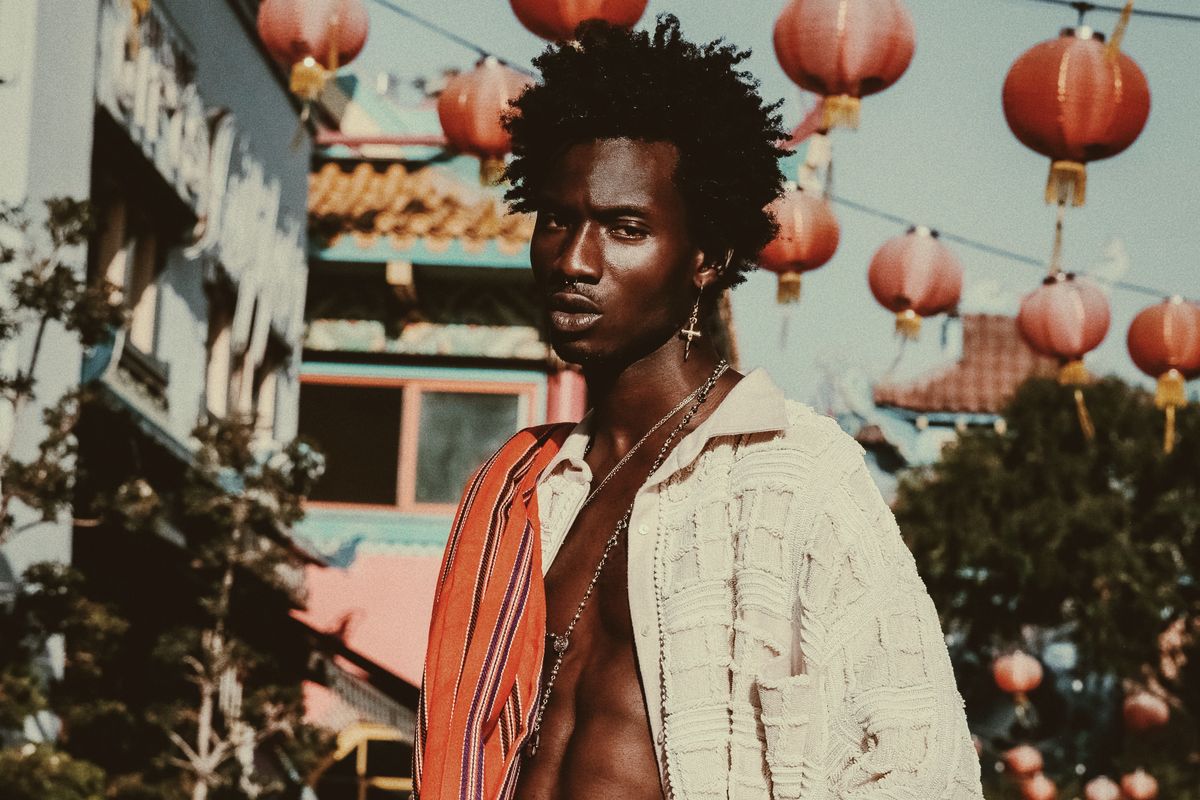 If 27-year-old Adonis Bosso hadn't been spotted by a model scout as a teen, he would likely have bypassed the runways of Paris, Milan and New York to pursue a special education teaching career in Canada. Bosso, who is the oldest of five, grew up tending to his siblings and the children at his family's home daycare center in Montreal where his parents settled after leaving their home in Cote d'Ivoire. Childcare was such an integral part of Bosso's youth that he went on to study special care counseling, a choice inspired by his younger brother, who is autistic.

"I grew up in a really big family, I'm the oldest of five kids," Bosso says. "One of my brothers has autism. Growing up with a sibling who is autistic made me mature faster. It already takes a village to raise a child, but families with autistic children need additional support. I saw that my parents really needed the help and it eventually pushed me to go study special care counseling."

Yet even after years spent caring for the children of others, Bosso admits that nothing could have prepared him for finding out that he was going to have a child of his own. Seated on the balcony of his home in Los Angeles, his excitement is as palpable as if the news were still fresh. So is his quiet confidence that even though they live on separate coasts and both have extremely busy schedules, he and model/Fenty muse Slick Woods, are going to crush the whole parenting thing. In August, the duo hosted an intimate baby shower together in New York where Woods is based. And although Bosso recently moved into a larger place to accommodate his growing family, he also plans to spend a lot more time on the East Coast.

Ahead of the birth of his son, Saphir, PAPER chatted with Bosso about impending fatherhood and his burgeoning music career.

First off, congrats! What was your reaction to finding out the news?

I felt like everything happens for a reason. Even though it's not something we planned it was the most amazing news I've ever gotten. I'll always remember when I found out. I was in the middle of the street with my guitar, I was actually headed to my guitar class. When she told me I just couldn't contain myself. Looking back, it was actually really cinematic. Imagine being in the middle of the street in New York with a guitar on your back finding out such life-changing news. I basically stopped the rest of my day and went to see her, and then we went to see her parents and tell them.

How prepared are you feeling?

I believe there's nothing that you are given that you can't handle, so I felt like I had been preparing all of my life for that moment. I grew up working in my family's home daycare, and being the oldest, I changed diapers, ran after toddlers, put babies down for naps, all of that. Also, being the oldest of five was preparation in itself. I've always felt like I was a really caring and nurturing person so finding out I was going to be a dad was just, like, a gift... that's the best word I can think of.

On a really practical level, how are you getting ready for the birth?

He'll be in New York for the first months so I have some time, but right now mostly I'm just baby-proofing and buying supplies. My parents have been really helpful and supportive — they've been giving me a lot of advice on all the things I should get now and what to expect when he comes home. They're super excited because he'll be their first grandchild. As soon as I told them, my dad went and bought a bottle of wine to celebrate. Everyone is so excited to meet him, he's going to be so blessed.

Are you nervous about how both of you will balance your respective careers?

At the end of the day, we're two very independent people but our son is always going to be the priority. I trust that we will always put him as a priority, no matter what happens with music or modeling or anything else. I live in LA and she lives in New York so I'm obviously going to be spending a lot more time in New York, especially when he's still a newborn. At the end of the day, nobody wants to miss anything with their first child — I want to be there for his first words, his first steps, all of that.

What about the logistics of co-parenting across coasts?

To me it doesn't really matter what our relationship is or what it's going to be today or tomorrow, our son is always going to come first. If we got married and divorced or if we're together or not, our son will be the priority for both of us. I want my son to spend as much time with his mom as possible and I know she wants him to spend as much time as possible with me. When two people have a common intention — and that's making sure our child knows he's loved — that's really all that matters.

Your music career is sort of developing in tandem with this new chapter of your personal life. Has fatherhood inspired any of your songwriting yet?

What lessons do you hope to teach your son?

Mostly I just want to reinforce his creativity and never force any of my insecurities or ideas on him. For instance, my mind can be my own enemy, so I want to make sure that my son always knows how strong he is mentally, and that he has power over negative thoughts. I want him to realize that in life there's always going to be someone you think is smarter or stronger or better looking, but you can't let your fear of not being good enough stop you. I want him to know there is only one him, and that's why he's unique.

Do you have any fears about raising a black boy in this country?

I was born in Cote d'Ivoire and grew up there before moving to Canada, so I've seen and experienced what it's like to be in a country where everyone looks like you. Being in Montreal and living uptown, I was in a really multicultural area. I had Vietnamese and Filipino friends, Caribbean friends, Italian friends, basically people from all around the world were my friends. I remember we'd go to a Vietnamese store to get African food supplies, that's how multicultural it was.

When I came to America it was almost a culture shock because there was such a distinct separation between how different races interacted with each other. I had heard about police brutality and school shootings that happened in America, but coming from where I grew up, I hadn't seen issues like that on such a large scale before. I know I'm raising an American child. I know that he's going to be born here, and that his mother is American. I think I just have to let him know that even if he does grow up a bit more privileged, as long as he is in this country he cannot be oblivious to the reality that he is a black man.

I also want to make sure he's proud of his African heritage. I grew up not knowing how cool being African was because it wasn't appreciated around the world. There was always a certain stigma around being African when I was a kid, so I want my son to know that the African continent is a rich place, no matter what people say. I think with social media and so many artists and designers becoming popular here it will be easy for him to see examples. Oh, and he will definitely learn French because it's my first language!