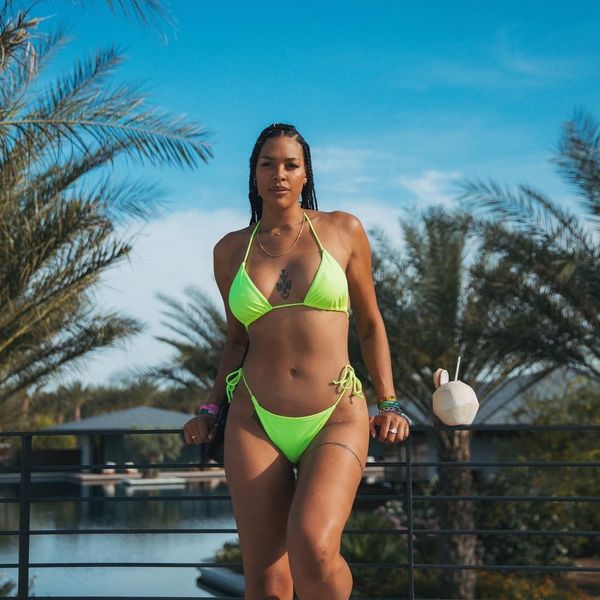 At this year's Coachella, while many companies descended upon Indio, California's remote festival grounds to provide one-of-a-kind branded experiences, adidas performed a quite luxurious zag. It seemed to answer the question: how do brands synonymous with sports influence the fantastical cultural playground of Coachella? Seamlessly and grandly, it seems.

Where there are hundreds of thousands of people from around the world gathering outdoors for music, a brand like adidas has a unique opportunity to encourage their active lifestyles. So to make a huge statement, the German company focused their efforts on Zenyara Estate, an opulent private property, by converting it into a tricked-out adidas Sport Club for both weekends. On campus, the indoor manor was outfitted with a game room, peacocks, private villas, and a beauty and wellness center, where refreshing face masks and other beauty products from brands like Urban Decay were gifted.

Surrounding the property outside were panoramic views of desert mountains and palm trees, including the estate centerpiece: a gigantic crystal clear pool fit for Olympians, where the adidas logo was featured prominently. Within the pool were seated bays, where people could easily take a dip or recline for a desert tan. There were pink and blue adidas basketball courts, where all-star tournaments took place, a soccer field, and an open-door Rolls Royce on the premises, plus artistically arranged rows of palm trees and white sand. Near the courts was a Bristol Studio booth where players in the tournament and Zenyara attendees could customize adidas Sport Club jerseys.

Such idyllic resort and party scenes obviously makes for many a glittering Instagram moment, appealing to influencer types and celebrities alike, of which many were present. During Coachella Weekend One, the Zenyara grounds played host to star athletes, chefs, and musicians, including NBA's Nick "Swaggy P" Young, Eddie Huang, A$AP Ferg, and more, with performances throughout by everyone from Pusha T to Diplo, who along with A-Trak, DJ'd sets during a no-phones-allowed party aptly called "You Had to Be There."

Also, Donald Glover, who performed as Childish Gambino during Weekend One, unveiled his new collaboration with adidas Originals, the Nizza shoe via a secret AirDrop announcement, during which attendees were also given pairs of shoes on site. Sosupersam, Noodles, and Just Blaze spun tunes for Desert Sunday, an event hosted this week by adidas Originals and The Do Over at Palm Springs' Ace Hotel and Swim Club. All weekend long, the liquor never stopped flowing, and the party never ceased.

During Weekend One's welcome barbecue soiree, hosted by Chef Huang, guests enjoyed miniature pulled-pork sandwiches, grilled chicken, cole slaw and other classic barbecue staples with no shortage of party-starting tunes. Pusha T performed courtside and I got to chat with WNBA stars Liz Cambage and Candace Parker on how they survive festival season, their relationship to adidas, and who they'd pick to play Coachella if they had their way.

Liz Cambage: I'm a festival queen and I've been around the block. Usually because it's so hot, I like to go in as minimal clothes as possible. But as an athlete, if I know I can go for a run when I wake up to stay in performance shape, I'm good. I don't drink. I'm going to put on my bikini in the morning and go to the pool party here.

Do you have a favorite Coachella memory?

Cambage: It's my first time here! It's already off to a crazy start. I legit rode in on a helicopter here to the estate with Kaytranada and A$AP Ferg. We chopped it in and landed, and a Rolls Royce pulled up and took us like five meters. Just seconds ago, Pusha T was performing literally right in my face. But definitely am so here for Miss Ariana Grande. I'm staying to see her. I'm leaving 2 AM Monday morning to get a 6 AM flight from LAX. Since My Everything, "Break Free" was all over my Snapchat. She got me through a breakup, and since then, she's been the one for me.

If you could pick your fantasy performance lineup, who would it be?

Cambage: I'm honestly still real sad I missed Beyoncé last year, that was so iconic. And Solange needs to come back next year. But the lineup is pretty dope this year. I've never seen the Weeknd live, maybe they can bring him next year, too.

Who is at the top of your list at Coachella this year, or just in general?

Candace Parker: I'm a little embarrassed to say, because I'm about to be 33, but I really love Jaden Smith. I can't wait for him to perform "Icon." We're supposed to pretend like we don't rock with it, but y'all know it's fire. Also, I have to say, I'm the biggest Jay-Z fan ever. I can rap every single word, so when he sang "Forever Young" and Beyoncé sang the hook at Coachella a few years ago — if they could just replay that on a big screen on loop every year from here on out, I'd be cool. Anything Jay-Z. If he came out and was just like "uh, uh," doing his signature cough on the mic, that would be enough for me.

What's the wildest part of adidas Sport Club for you?

Parker: I represent three stripes, 12 years strong now. They asked me to come here. If a brand is gonna do all of this, to the point where A$AP Ferg is within arm's reach away from me, that's pretty wild.

Parker: I think it's more like, how do you fit in training? Honestly, as athletes, we didn't get to this point for no reason. We like to have fun, but we're disciplined and it's what got us here. We make time and schedule our days to train when we need to, so when we're on the court, we're bringing our A-game.

Watch a video capturing the adidas Sport Club experience, below.