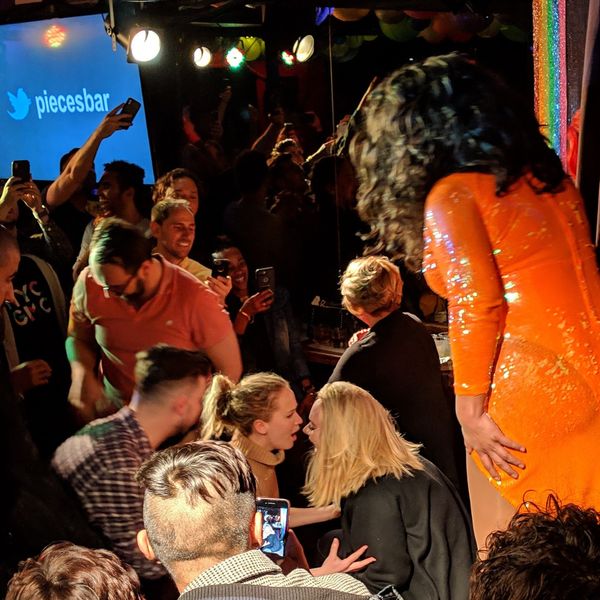 Adele and J. Law will Make You Feel All the FOMO

Besties Adele and Jennifer Lawrence sure do look like they had one hell of a time on Friday night. The two turned up at Pieces, a popular gay bar in New York City, and the photos and videos from fans at the watering hole look lit.

The pair participated in a fun night filled with games, starting with Adele coming up onstage. The hosting drag queen asked the British singer if she was single, and of course she replied that she was married. But when asked if she was asked if she was still ready to mingle and have a "great time with the gays," she was not shy to reply, "Fucking obviously."

And @Adele is on stage at Pieces tonight. Oh boy, this is fun pic.twitter.com/e7fesvNIEI

Soon, the "Someone Like You" songstress wound up playing a game of "musical shots," which she lost. And J. Law, being the great supportive friend she is, shouted, "How could you lose?" To which Adele jokingly replied, "You bitch!" The host then volunteered that she take her friend's place in the game, to which she said, "It has nothing to do with my drinking ability!"

I’M AT PIECES AND ADELE AND JENNIFER LAWRENCE ARE HERE LMFAOO pic.twitter.com/sQfzOcRJmh

Later, both of them ended up literally rolling on the floor of the bar laughing, with Jennifer still distraught that Adele had lost the game.

This @thebritafilter video of drunk Adele and Jennifer Lawrence ON THE FLOOR last night at Pieces deserves your attention and acclaim. pic.twitter.com/Ulh6w0W4hS

All in all, it looks like it was a fun night, and the Internet is feeling the FOMO. And, honestly, same.

So my boyfriend said last night after dinner that we should go to #Pieces bar and I said no because we were already in the car heading home. I will live to regret this for the rest of my life. https://t.co/ajNQrpZwal

Y'all. I was NEXT DOOR. NEXT DOOR. AND I HAD NO CLUE WHAT WAS HAPPENING OVER THERE 😭 https://t.co/78e7EHtPBY

from “stay at home mom” to “mingling and having a great time with the gays” adele is truly, that bitch https://t.co/L1YZZPlSCk

But wow what a moment https://t.co/DhIyFTvPcn

The BFFs first met in 2013 at the Oscars, and have been hanging out since. In an essay for TIME's 2016 TIME 100, she wrote, "I remember sneaking backstage while she performed 'Skyfall,' trying to squeeze a ball gown past a pile of ropes and cables just to get a little closer. See her from another angle as if to peek behind the Great Oz's curtain. I had been a fan of hers since 'Chasing Pavements' (saying 'fan' about Adele always sounds like an understatement, doesn't it?)."

"Her undeniable talent and beauty... Adele is a gift, an international treasure, but she's also sweet, funny, intelligent and beautiful," she explained. Truly, friendship goals.