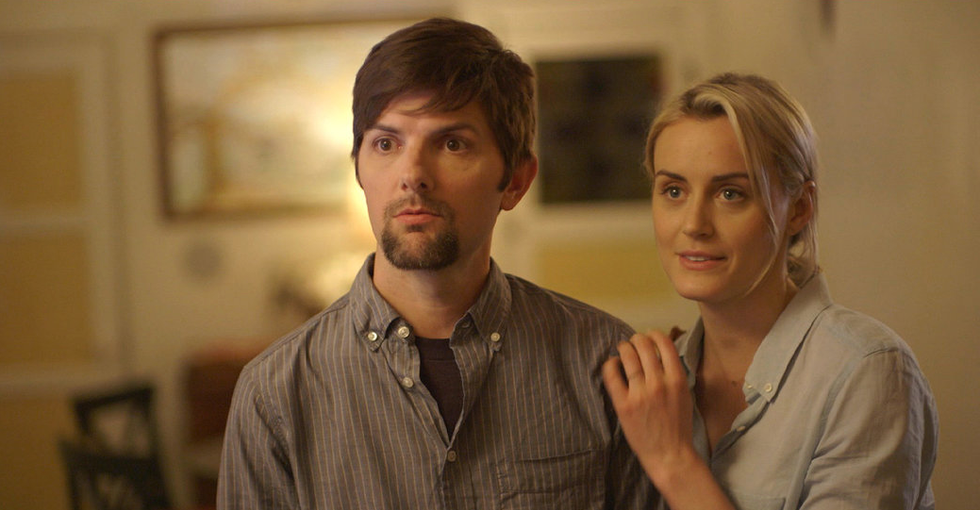 Adam Scott On Small Penises, Male Bisexuality and His New Movie The Overnight

by Michael Tedder
PAPERMAG
Adam Scott and Taylor Schilling in The Overnight
From the douchey husband in Step Brothers to the perfect husband on Parks and Recreation to the neurotic husband on Tell Me You Love Me, Adam Scott has gotten plenty of opportunities to show off his range as an actor in the past few years. But in his new film The Overnight, which he co-produced along with his wife Naomi, Scott shows off a completely different side of himself. Scott fans have never seen him play a character this insecure and emotionally open before... and he's also pretty much naked in it.

Directed and scripted by newcomer Patrick Brice and co-produced by the Duplass Brothers, the raunchy Sundance hit stars Adam Scott and Taylor Schilling as young parents that struggle to make friends after moving to Los Angeles. After agreeing to a dinner party at the ultra-confident Jason Schwartzman's house, Scott is elated to make a new friend...and then things take a turn. You've perhaps already heard that there's a scene where Scott and Schwartzman dance around wearing prosthetic penises (Scott's fake one is a micro, Schwartzman gets to have the "goddamn horse cock."), but there's more to this modern Bob & Carol & Ted & Alice than fake dicks, as The Overnight explores the nature of modern masculinity and the difficulty of adult friendship and life after children in a smart, insightful and hilariously blue way.

I met with Scott at New York's Bowery Hotel to discuss selecting the right fake penis, life after Parks and Recreation and whether there will ever be any more Party Down. (The only thing he felt comfortable saying on record is that the outlook is not currently great.) He was charming and thoughtful throughout the conversation, but got especially animated (as did the teenager sitting next to us) when the conversation turned to Game of Thrones, so spoiler alert for the five people out there who haven't heard about that character who probably didn't really die in the season finale.


What attracted you to the project?

It explored the idea of male friendship in a new way, and I'm kind of fascinated by it. And also, it really freaked me out. Guys like Jason's character tend to freak me out a little bit. Like, super friendly, lots of compliments and a little touchy, so that freaked me out, and the nudity and stuff freaked me out, so I just figured, if I'm having this strong reaction, maybe it's something that would be healthy to do. And I just thought it was very funny, and my wife and I were looking to do a feature for our company and Mark (Duplass) brought us this script, and we could do it for a small amount of money. All the pieces seemed to fit.

It's also a really relatable thing. You can be very happy in your love life, have a good job, but if you're in a town where you don't know people or if you're out of college and don't know how to meet friends, it can feel very lonely anyways.

Yeah, It's tricky. I was just saying to someone that the only ways I meet people now are through work or through my kids.  I don't go out to bars anymore, just because I just don't have the time, and the reason work is the way to meet someone is that's where I spend all my time. Maintaining a friendship outside of work or my kids is almost impossible. So I can't imagine moving to a place where I didn't know anyone. I don't know how I would meet anyone.

So, there's a long history of actors turning down roles because they would be embarrassed or think they wouldn't look cool. But not only did you go for a role where you're playing a man with a small penis, you made it happen. You produced it.

When we said "yeah, let's do this," you know, making a movie is so hard, and it never happens, I sort of thought "this'll never happen," but my wife is very tenacious and aggressive, and she made it happen and so it was like "oh shit, so I actually have to do this stuff. This is going to be hard." And I'm so glad that we did, because it was a rewarding experience, and I think it turned out well, and it's nice to be able to go out and promote something and be like, really one hundred percent happy and really mean it when you're telling people they should see it. I could've played the other role, I guess. I just really connected to this role.

Obviously, you were wearing a prosthetic and everything, but you were still fairly naked in the film. Were you nervous at all during those scenes?

Super nervous, Jason and I were both super nervous, but then once we got those things on, we were weirdly comfortable. Because it looks like a real penis, and you're not wearing anything else, so for all intents and purposes everybody sees exactly what you would look like naked. But there's this psychological barrier, because it's not your penis. So we were far more comfortable than we thought we would be. We were hanging out on set. It just looked like two naked dudes, but we're not really naked -- it was very strange. And once you get in the pool - we were in the pool for a while and you get really water-logged -- it was actually kind of freeing, similar to how the character feels afterwards. I was far less self-conscious than I thought I would be.

How did you go about figuring out which one would look good on camera, what was that process like?

There was an e-mail chain somewhere between my wife, Duplass, and Patrick the director, and the guy who makes the prosthetics, trying to figure out which one is appropriate for the large one, and then we'd hold a photo up to it for scale. I remember at one point, they're like "here's the small one," and Duplass and I were both like, "Really, is that what people think is small? Okay, uh, maybe we should go smaller." At one point it was like, "Do we go micro micro penis or is that too extreme?" And then there was a dick that was so big it was just ridiculous.  So we had to find a happy medium and, I think there's something interesting that the dick my character has is not a micro thing, it's more about how he feels about it, than anything.

Was your wife on set during like the sex scenes?

Do you read Dan Savage at all?

He talks a lot about how like male bisexuality, on the spectrum of human sexuality, is often denigrated or ignored, but it's very common for men to be curious about other men in a way. And sometimes it is subtext in films, but here it's front and center.

It's so true, like there are so many quote unquote, I don't want to say "bromance" but, there are a lot of movies that I've seen in the past 15 years where it's like the next scene would've been them making out.

And these two guys, you know, I don't want to spoil anything because it's such a great moment when it unfolds in the movie, but I love that Patrick had the guts to go there.

Like, I Love You, Man ... at the end of it, it's like, Paul Rudd and Jason Siegel should just marry each other.

How does it feel to be done with Parks and Recreation? Is it scary to not have that paycheck and constant exposure, or nice to have more time to explore things?

I never took that show for granted. I don't think any of us did. We all talked a lot, through the whole five years I was there anyway, about how lucky we all were to be on a show that's actually good, and on a network, and we were all really into it, so for it to end was tricky emotionally, because we all felt like it was the right time to end story-wise, and it was still good, so why not end when the show is still working, but at the same time you're saying goodbye to your friends and to a job, so yeah, it is scary, but it's exciting. I want to keep doing television. I don't know if I want to find a comedy to do or something else, I'm just sort of taking it slow and patrolling around for something.

Are you looking to produce any more projects?

Well, we have a couple shows in development at Universal, one that's at NBC. Joe Mande's writing it. It's about the green rush in Colorado. It's called Buds. We're very, very busy with stuff.

Now, I know the Parks and Recreation writers often based characters on their actors' real lives. Your character was a big Game of Thrones fan. Are you?

Did you see the finale?

Do you think Jon Snow is dead?

It's A Song of Ice and Fire right? So it has to be him versus Khaleesi at the end.

Is Ice and Fire the next book?

No, the book series is actually called A Song of Ice and Fire, Game of Thrones is like one title in the series. Plus there's like a sorceress, right there.

(A teenager sitting next to us) Did you watch the episode?

Teenager: Did you see when he dies?

Wait wait -- who can raise the dead?

She can raise the dead?

Yeah. Or I think the Lord of Light can.

Do you think he can come back as a white walker, maybe?

I hope not, but maybe. But I do not think he's dead.

No, I don't think he is either.

But I bring this up because one complaint people have in this show is there's a lot of female nudity and not much male nudity.

As a person who has now more or less done it, why do you think it's so scary for actors or producers to want to go there?

Because it's uncomfortable, you know? I don't blame people for not wanting to do it. It would've been a whole different thing if I didn't have the prosthesis on there. It's uncomfortable doing sex scenes, it's uncomfortable for good reason. I think Game of Thrones should keep doing what it's doing, unapologetically being the show it is.

So what's your next project going to be?

I've just been going nonstop for a while, so I'm just gonna stop and relax. I feel like the show ending, it's maybe time to sort of reassess and just really figure out what I wanna do.

What do you think you're going to do on your break?

We're gonna go to the beach. We rented a little house, and my kids and my wife and I are gonna go there for ten days. They're eight and six. And I think they're gonna be happy that I'm taking a break, too.

So you can really relate to the stressed out parent thing that you're playing in the movie.

Yeah, for sure. I think it's an interesting thing about the movie, you put down your roots, you feel like you have to be a rock for these other people in your family, and so you stop changing, because you feel like, "okay, now I'm this, the die has been cast. This is who I am," and you forget that you can change. You can evolve still. I think the characters in the movie discover that.
You May Also Like
Internet Culture