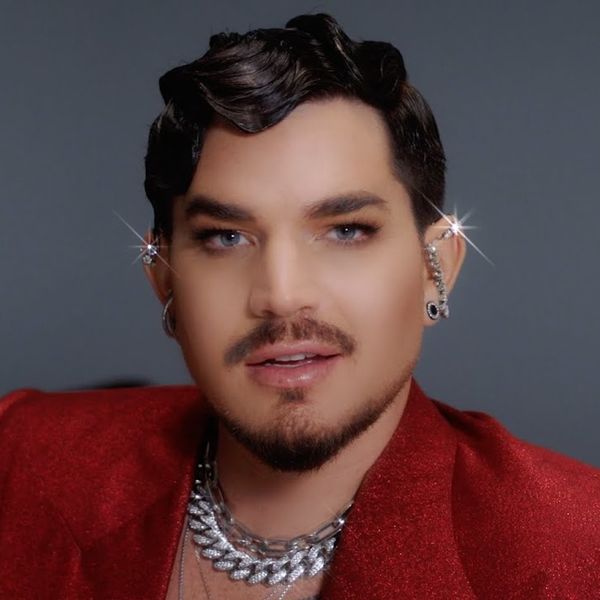 You barely have to make it 30 seconds into Adam Lambert's music video for "Velvet" to understand what it's all about. Playing the part of tailor in a get-up that's equal parts Austin Powers and Liberace, Lambert works his way up the inseam of his model and quickly shoots a suggestive look back to the camera. It's cute, it's campy, it's flamboyant, and Lambert wouldn't have it any other way.

The title track from the singer's fourth studio album, "Velvet" plays off retro sounds with a brass-backed chorus and Nile Rodgers-esque guitar riffs (who later features on the album cut "Roses"). Still, Lambert manages to never get mired down in nostalgia on Velvet, out now. Directed by Charlotte Rutherford, the "Velvet" visual is everything Anna Wintour's 2019 Met Gala wanted to be: pure camp with a sartorial edge. Scantily clad cowboys, slicked up body builders tearing away their pants, melodramatic funerals and a white wedding to rival Billy Idol are all packaged to look like they came from an '80s Sears catalog.

PAPER caught up with Adam Lambert to talk about the making of "Velvet," the singer's passion for style and what he's been up to in quarantine.

Where did the idea for the "Velvet" video come from?

I was a really big fan of Charlotte [Rutherford's] just from Instagram, and I had been saying for a while to my team, "We should shoot a video with her, I really like her style. It's out there." So I reached out and by the time I got her on the phone to talk about ideas after she had heard the song, I said, "Do you think it would be a cool idea to be literal? Since the song is comparing the perfect lover to a piece of fabric," which is so camp and silly. I said, "Maybe I should just be designing suits for handsome men, making it really meta and cheeky." We both laughed and I asked, "Is that crazy?" and she said, "No, I actually think that would be really cute!" She had the idea of laying shades of Rocky Horror on top of it and other little elements, but I was really excited that she liked my silly idea.

It's really tongue in cheek. Does that come naturally for you?

I think that is really a lot of my personality and it's funny because I haven't really gone there that much with music videos yet. We did a little bit in the "Superpower" music video. That is a natural go-to for me. I'm a bit of a clown in front of an audience. I think ["Velvet"] is really buoyant and light and fun. I said to [Charlotte], "Let's go over the top with it! Let's have fun!" The other thing that I said to her was, "I just want to make a really gay video. As queer as we can go with the casting, with some of the set-ups, and with some of the little beats." And she was game. I'm really happy with the way it turned out.

The video casting is also incredible.

I talked to Charlotte about it and said, "I want to see everyone being reflected. I want this to be super queer and super alternative," which reflects my real life social life. I love that we have all different ages, genders and racial representation. It feels like a beautiful microcosm of the utopia we hope to find someday.

The album and video are quite retro. Why did you lean in this direction?

The whole album is an homage to the past. With Velvet, the album, I was excited to create a body of work that was cohesive and had a through line to it — sonically, lyrically and matching that with the visuals. Since we put out the first single, "New Eyes," that trickled out a handful of other singles. That's been the visual vibe since we started. I wanted to give the whole era a look. It's something I've always been really drawn to when other artists have done it. With Velvet we really leaned in all the way. The song "Velvet" is the title track, so I wanted to sum it all up and give a nice celebratory launch to the whole album.

What was your favorite part of the filming process?

My favorite set-up was the wedding because it was goofy to catch the bouquet and be a dork. I loved that white outfit.

"I love that we have all different ages, genders and racial representation. It feels like a beautiful microcosm of the utopia we hope to find someday."

Very. I wish I had seen Tiger King before the video because I think I would have leaned into it even harder. I would have needed a blonde mullet.

Are you Team Carole or Team Joe?

I'm only two episodes in. I just got into it. I saw everyone talking about it and thought, "Well, I'm not busy so I'm going to check it out." The first couple episodes, I thought I saw a bit of hypocrisy in Carole's criticism of Joe. They're both basically doing the same thing with the cats in the park.

Stick with it, it's definitely worth it.

The other thing I loved about the video was working with Kieran [Fenney], who helped me put most of the looks together. I brought most of the stuff from my own closet, but seeing how he styled everyone else in the video was such a surprise. I would come out of my room and people would be coming out of their dressing area and I would be like, "Oh my god, that's so cool!" So I was really impressed by the fashion that he put together for the video. We had a big group call before we started and I said, "This video should feel like a shoot; it should feel like an editorial; it should be very fashion forward. That should be the main feature of it."

I have a shopping problem. I just love clothing, accessories and shoes. I've become a dangerous online shopper now. It's just too easy, you don't have to leave your house. You can just do it whenever you want, whenever the whim hits you. You have to be careful after that second glass of champagne and pick up your iPad. I consider myself sort of a student of fashion. I like to look at all the runway presentations every season, scroll through pictures and digest it, see what's happening and what the movements are. Certain designers obviously resonate with me more than others. I love looking at it, analyzing it and seeing what would work for me. I've been really blown away at a handful of designers who are doing a throwback '70s-inspired fusion. Obviously Gucci has been amazing; Alessandro [Michele] is brilliant and Marc Jacobs. Even AMIRI's recent runway show I was blown away by. I want to wear a flared pant, a platform shoe and a really strong-shouldered jacket, and that makes my day.

Behind the Scenes of "Velvet"

If I threw open the doors to your closet, what would I see inside?

A lot of shit. I actually keep saying, "I got to clear out my closet and make room for everything." I feel like a fashion hoarder right now. I don't want to give anything away.

What's a trend you wish would go away or just finally die?

They're trying to make bootcut jeans happen again and I'm like, "No".

Yeah, because I like the way they make your leg look longer. I like the illusion they give you. I'm into bootcut jeans. I'm kind of burnt out on skinny jeans, personally. I think we played that one out.

"I want to wear a flared pant, a platform shoe and a really strong-shouldered jacket, and that makes my day."

For me, I like the way it accentuates the calf.

I think that's the thing, it depends on your leg. That's why trends are interesting, but sometimes you just have to go with what works for you. I've always — since I was a kid — loved flared, weird pants and that's just always been my thing. They go in and out of style. I like the way they make the leg look and the way they make the body look. I have very skinny ankles and they're not in proportion with the rest of my leg, so I like things that help balance [my body] out.

How are you coping with the quarantine at the moment?

I'm really grateful I have housemates with me at this point because I usually live alone. When I was on tour a couple months ago, I had some friends moving to LA from New York that needed a place to land and I said, "Yeah, stay at my house." Then all this stuff happened, and it was like, "Well, will you stay?" It's brilliant because now I have company. I'm very grateful.

In light of coronavirus, you've had to cancel and postpone a lot of dates. How has that affected the way you rolled out the album?

It's been interesting because obviously we had to switch gears really fast because the plan was to do TV performances and to travel, and we just had to improvise and find out what worked from home. It's been interesting and also somewhat comforting that everyone's been doing that. I'm not alone in this. We're all unified in our survival of this thing, which is cool because that creates an understanding. Looking forward, what I'm trying to do is balance connecting with people and still promoting, interviewing and connecting with my fans on social media, but also splitting this time with some hibernation energy. I ended up buying a bunch of recording equipment online so that I could have a little studio at my house. I'm starting to interface with a couple different producers to see what we can do virtually. We don't have to be in the same room at the same time to work together, so I'm starting to see what I can do to be self-sufficient in creating for the future. Also lots of re-decoration projects in my house!

I painted a chest the other day. I ordered a bunch of macrame basket hangers from Amazon and I had a field day the other night hanging them all up. I decided I wanted my space to have more of a hipster, earthy, hippy thing going on. I macraméd!