Adam Goldman, Creator of The Outs, Talks Girls, Grindr, and How He Created the Best Web Series Ever. 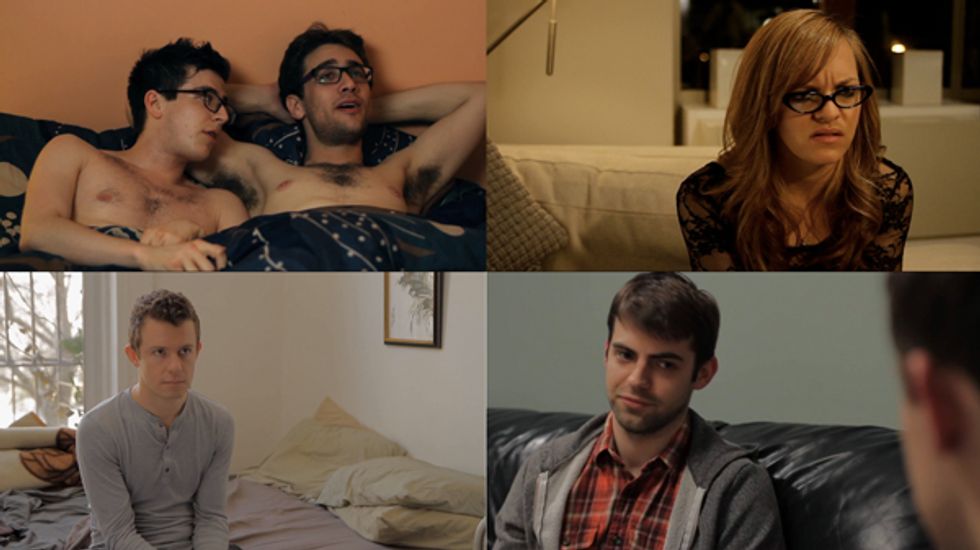 If you haven't already heard of it, you need to to start watching the cult web series The Outs. It just might be even better than our recently-ended Sunday night obsession, Girls! Despite only having three episodes under his belt, the show's creator, Adam Goldman (pictured on the top left), has amassed a devoted audience thanks to glowing coverage on sites like Out.com, Towleroad, Buzzfeed and Queerty, among others. The Outs follows the lives of three twenty-something Brooklynites -- Mitchell (played by Goldman), his ex-boyfriend, Jack, and his best friend, Oona. Plots feature an entertaining combination of gay dating, straight dating, hipsters, one-liners, unemployment, and sex that speaks to twenty-something viewers (or anyone who needs a reminder that your twenties kind of suck). Characters are, for the most part, way more likeable than the ones we see on Girls, and the show manages to be both very funny and occasionally very sad. (The Outs is also in need of money: they're only funded through Kickstarter and PayPal and rely on viewer donations to keep things going.)

We recently chatted with Goldman about how The Outs was created, Girls, Grindr, and lots of other stuff! Read it below and catch the first episode at the bottom of the page:

How exactly did The Outs come about?

I moved to New York and I was living with my roommate, Sasha Winters (pictured top right), who plays Oona on the show and helps me write the show. We wanted to work on something together and my boyfriend at the time said to me -- I was wearing something and he said, "Wow, that makes you look desperate." And I said, "Wow, that's really fucking mean." And he said, "But you wrote that. That's a quote." And he sent me a scene that I had written a year before -- it's actually the last scene of the first episode, when my character, Mitchell, and my character's ex, Jack, get into a fight. It's so funny because I had written something that I had loved and had completely forgotten about it. The Outs grew out of that one scene. It changed a little bit, but the DNA was all in there, and it was about figuring out who these people were, and how different they were, and why they hated each other so much. And I talked to our director of photography, Jay Gillespie, who is straight, but read it and said he'd never seen anything quite like it. Which is true -- gay people don't have an interesting show to watch with gay characters and neither do straight people. I think that everybody deserves that. Anyway, Jay wanted to help us make it, and that's what The Outs grew out of.

So the inclusion of Oona as a female character was natural given that you're writing with Sasha?

Oona was in the script from the very beginning. I was writing a part for Sasha before we were working on it together. The show is about diversity, it's not about being 100% gay men. And given what we wanted the show to cover content-wise, it's just too much for one or two characters. We wanted to loop in the dating stuff, and also the job stuff that people are going through right now -- [the character] Jack deals with unemployment -- and with two men and a woman -- we didn't feel like we could cover everything. But we felt like we could cover a broader spectrum of whatever this experience is that people are having right now as twenty-somethings in New York, with not a lot of idea where they're going.

What made you decide to make the whole show very Brooklyn-specific?

It would be a little bit criminal for us to not use some of these locations and these businesses and particularly the music in Brooklyn. In the third episode, the wine shop they go to is this place wino(t), that's across the street from my apartment [in Crown Heights] and it's gorgeous. Why wouldn't I want to shoot there? I also patronize these places. These things are all in my neighborhood and I like them and I like the people; if you've got a supportive community you should try to loop it in. And we want to let you know what it's like to be in Brooklyn without alienating you if you'd rather not know.

Do you think there's a difference between the gay experience in Brooklyn versus Manhattan or even within different neighborhoods in both boroughs?

Yeah, probably. There's not a whole lot of gay culture in my neighborhood. I used to live in Williamsburg, I used to live right down the street from [the gay bar] Metropolitan and that was fun. I'm sure living in Chelsea there's a lot more opportunity to go and do your gay thing. There's also this perception that everything is much shinier [in Manhattan]. But I'm like a really deeply un-fun person and I don't like going out, and I have to be really drunk if I'm ever going to dance, so it doesn't affect me much. If I lived in Chelsea I would do the same amount of going out, getting drunk and going dancing that I do now -- which is very little. I live in Brooklyn and it's dirtier and I think there is a difference.

Sure, although I'd like to point out that The Outs is a show with disproportionately good-looking -- and pretty fashionable -- characters.

How do you feel about The Outs' comparisons to Girls?

I feel fine about it. I think this Brooklyn thing is really in the zeitgeist right now. There's Girls and Two Broke Girls and I Just Want My Pants Back -- people seem to give a shit about this place culturally. I've watched the pilot for Girls and I have fastidiously avoided watching the rest of it. I really should be watching it -- but our Venn diagrams overlap a little bit and I just don't want to go there right now.

Do you ever worry about The Outs being accused of also having a lack of diversity in its cast?

We're conscious of the diversity thing. I'm interested in engaging in the conversation but at the end of the day -- in a similar way to Girls -- the story I'm telling is about X and not about Y. I really want to see the show about what it's like to be a young black gay man in Brooklyn. I'm probably not super-duper qualified to write that right now. I don't want to make it look like everyone in Brooklyn is white, because everyone in Brooklyn is not white, obviously. We're trying to engage that, but it's not the point of the show.

The plot of The Outs feels so real. Are the characters' experiences based on experiences you've had and your friends have had?

Some of the experiences are based on things that have happened to me. And some of them are completely fabricated. All the characters have said things that I've thought. Those situations and those thoughts wind up in different peoples' mouths. Oona says a lot of things that I think -- she gets a lot of the sassier things that go through my head, which is important to me because I play Mitchell, but he's not me. I think I have, like, one ounce more game than Mitchell! Some of it is autobiographical but largely it's not. The central crux of the story, this breakup, is not based on any breakup that I've ever had, fortunately. I play with these things but generally they're fiction.

What other TV shows inspire you?

British TV -- there's a British sensibility with comedy where it can make you laugh and it can also make you feel something and I think that's really important. The Office, Extras, Pulling -- shows that make characters flawed but lovable and you really want them to have whatever they want to have, but you're watching them fuck it up in a way that you like.

Do you think there's anything generation-specific about the way we do romance and relationships?

Probably. All this technology stuff and the prevalence of online dating and how it used to be frowned upon and now it's huge. It's just a different way of meeting someone -- meeting someone on OKCupid versus meeting someone at a bar, I don't think one is preferable to the other and I think you probably learn more about someone at first blush meeting them on the Internet. It's just all about options. Someone called the show 'post-gay' yesterday, and I thought that was really interesting. I think Dan Savage said that what used to be considered the gay lifestyle, where you leave college and move to a metropolitan area and you have a bunch of sex, is now just the lifestyle for young people.

Do you you do online dating?

I think everyone has fiddled with Grindr. Anthropologically, Grindr is like the most fascinating thing. I worked on this radio documentary where I drove across the country. You open up Grindr in New York and there are 150 gay men on the block; you're driving through Alabama and there are 2 gay men in 150 miles of you, and they both would like to drive two hours to meet you, because you're the only gay man in their town of 400 people. It's fascinating.

What's the most bizarre comment you've read about The Outs?

In the third episode, there's a still-shot of me shirtless in bed with the delivery guy. There was a guy who said: "I'm gay, but I can't get past the armpit hair. In LA, we trim." I was really proud of that. It's also interesting because you'll get two comments next to each other and one of them will say "I can't believe it's another portrayal of a gay man having anonymous sex, that's not good for the community." And then the one below that will say, "Why does the guy having anonymous sex have all these mental problems? Why can't he just be a slut and be happy with it?" Obviously we can't please everybody, but I love reading those comments. And I will not be trimming my armpit hair.