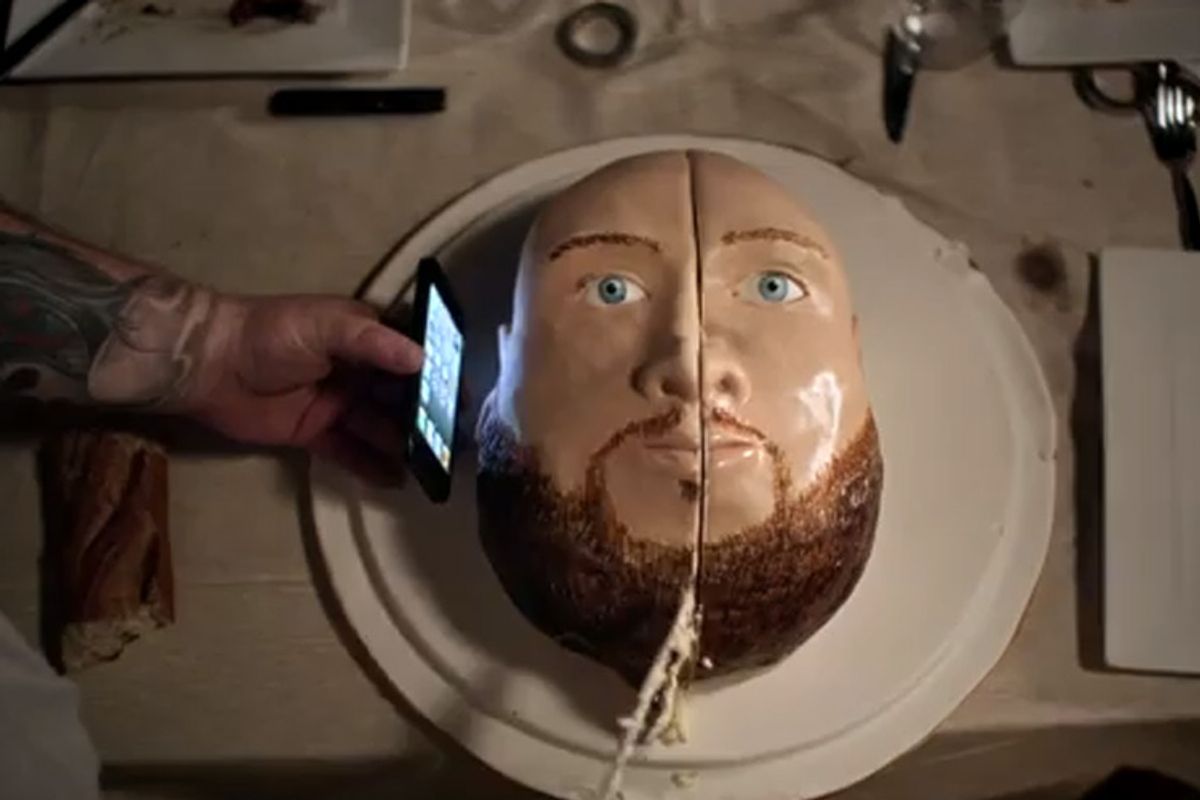 Redheaded white rapper, Action Bronson, has officially been banned from performing at George Washington University's Spring Fling festivities this weekend, after a student backlash rose against the musician's sexist and transphobic lyrics and music videos.

The outcry, most prominently featured in the GW Hatchet, specifically referenced Bronson's 2011 song "Consensual Rape," as well as the video for his track "Brunch," which depicted him cooking a meal next to a dead woman, then dragging her into a car and calling her a bitch while stabbing her corpse.

The university's program board released this statement, assuring students that Bronson would absolutely not be performing:

The Program Board has decided to remove Action Bronson from Saturday's setlist. We apologize to the GW community for causing distress over the past few days and for attempting to bring an artist who is not consistent with our values of diversity and inclusion. Spring Fling is intended to be an event for all students to enjoy and including Action Bronson in the day would go against this. GoldLink will headline Spring Fling this year, and we are looking to fill the remaining time with a local act alongside Lean Quatifah.

We have learned important lessons from our mistakes in this situation and are eager to grow as an organization so that we can continue to offer the student body fun and welcoming concerts in the future. We have already begun discussions to ensure that the Program Board will have a more structured and formal system to screen artists and will work to incorporate a greater level of student input so that in the future we invite only those who live up to GW's values.
We hope to see everyone on Saturday.


Bronson then released a statement of his own:

To the Students at George Washington University and the public at large:

I'm writing this letter to hopefully bring clarity to some misconceptions about who I am as an artist and as a person. It has become clear to me that things have reached a point which makes me feel the need to address the issues raised so that we can bring some understanding and healing to the table, so to speak. I can't continue to walk around with the thought that people are thinking these things about me that are far from who I really am.

Five years ago in 2011, I wrote a song called "Consensual Rape" that admittedly contains lyrics and a general sentiment of violence towards woman which I never meant to represent who I am but rather to depict a story. I approach my music as other types of artists approach their work, and I don't always intend the stories that I tell, the characters that I play in them or the lyrics I lay down to be taken literally. The songs I make aren't any different than a director creating a movie, or an author writing a book meaning they contain scenes or things happen in them that aren't meant to be anything but an artistic expression- just a song, a book or a film. I've never performed "Consensual Rape" at a concert, and I don't plan to.

Regardless, I understand that when it comes to musicians, and more specifically rappers, the lyrics I say are taken to heart many times as a representation of my beliefs or true feelings. SO please let me make this very clear: I think rape and acts of violence toward woman are DISGUSTING. I would never condone anything remotely close to that type of behavior, and it's certainly not what I'm about at all. But, the song in question has caused people discomfort and pain and I'm sincerely sorry about it. It was not my intention to hurt people when I made it years ago, and I certainly will be much more sensitive on this matter moving ahead.

Similarly, there has been some attention placed on a insensitive Instagram post I made years ago regarding me inappropriately labelling someone as transexual and being disrespectful to them in a way that is not ok. I have sat with members of the LGBT community recently in an effort to understand how to avoid being hurtful and insensitive towards these issues moving forward. I have never had any issues with anyone's sexual orientation or gender transitioning. I'm far, far from perfect and I recognize my flaws and I'm making an effort to grow and be a better human.
Thanks for reading this.

Similarly, the rapper was barred from performing at Toronto's NXNE showcase last summer for the same reasons.