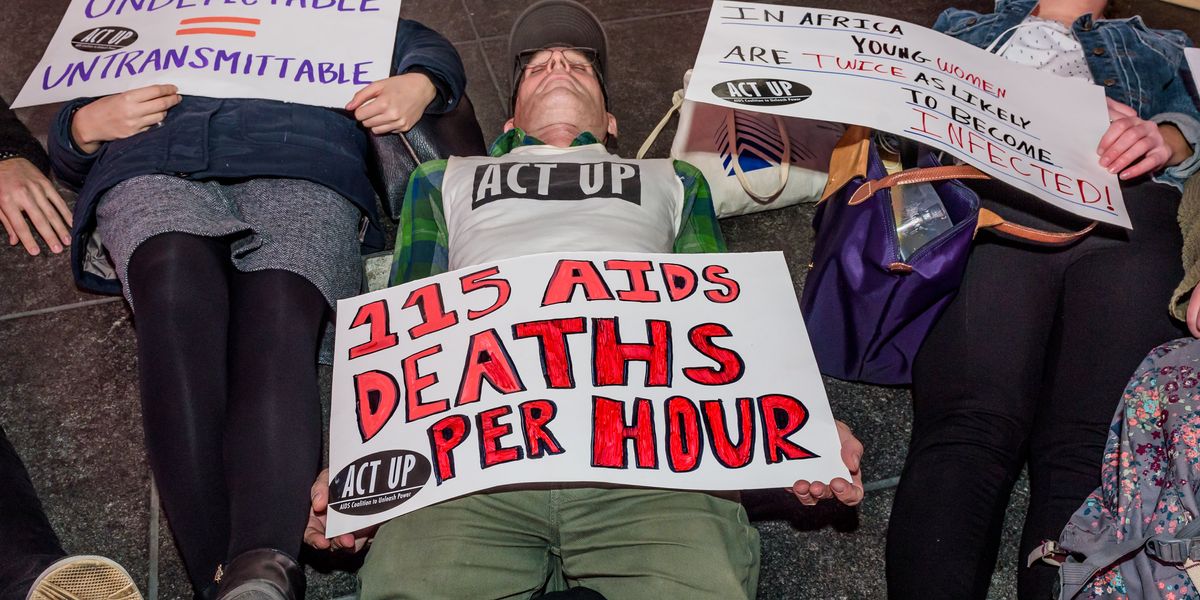 ACT Up Stages Protest at The Whitney Museum

"The AIDS crisis did not die with David Wojnarowicz."

This weekend, 20-year-old photography student Ariel Friedlander and 12 other members from the New York chapter of AIDS Coalition to Unleash Power (ACT UP) staged a protest at The Whitney Museum. Their focus: to honor the legacy of late artist and writer David Wojnarowicz, whose work is currently being shown at the Whitney, in an exhibition entitled History Keeps Me Awake at Night.

The protesters argued this exhibition fails to reflect the reality of the ongoing HIV/AIDS epidemic, assembling a claim that the Whitney wrongfully omitted Wojnarowicz's work as both as activist and someone directly experiencing the '80s AIDS crisis, up until their own death in 1992 of AIDS-related complications at age 37.

The ACT UP contingent, to their credit, made a series of flyers asserting these correlations. For example, next to one work, a 1990 screenprint called Untitled (ACT-UP), the coalition posted its mission statement, while another flyer read this:

"AIDS is not history. The AIDS crisis did not die with David Wojnarowicz. . . . We are here tonight to honor David's art and activism by explicitly connecting them to the present day. When we talk about HIV/AIDS without acknowledging that there's still an epidemic – including in the United States – the crisis goes quietly on and people continue to die."

Friedlander, who said that she was upset to the point of tears after initially seeing the exhibit, wanted the protest to honor Wojnarowicz, so that he did not "die in vain." She also wanted people to remember those each year who continue to suffer from AIDS complications that ultimately kill them.

"Whenever we talk about AIDS and the artists and activists who were HIV-positive and who passed away from AIDS-related complications, it is our duty to carry on their legacy," she told ARTNews. "It's an ongoing issue and we can't memorialize or romanticize their stories. We have to put them into context or else their message is lost. Even if one person dies of AIDS, it is our responsibility to do better and to speak out for them and to find an end to the AIDS epidemic because we are talking about human lives. We are not just talking about paintings on a wall."

In response to the protest, the Whitney released the following statement, asking that it be reproduced in full:

We are honored to present the work of David Wojnarowicz in our current retrospective and embrace the opportunity to bring more awareness to the ongoing AIDS pandemic. The more this vital subject can be brought front and center, the better. We completely agree that the AIDS crisis is not history. Part of our mission in mounting this exhibition is to make sure the history of the AIDS crisis figures centrally in American (and international) history so that it might inform present and future action. We have made an effort to frame AIDS as a current and ongoing crisis in a number of programs, including the July 13 symposium (the opening day of our exhibition) entitled "Visual Arts and the AIDS Epidemic" and in a September 7 reading that is being co-organized with Visual AIDS. Both include HIV+ artists and activists. Our educators and docents speak about the ongoing AIDS pandemic in tours in the galleries. We have a series of scheduled programs on Saturday afternoons throughout the exhibition that address "Queer Art and Activism." Perhaps our position is expressed most clearly in the following wall text that is part of our exhibition "An Incomplete History of Protest" which is now on the sixth floor and has been on view for the past year: "As we continue to live with such loss, and AIDS still affects individuals and communities in the United States and globally, the rallying cry of ACT UP (AIDS Coalition to Unleash Power) resounds today: the AIDS crisis is not over.

Still, activists such as Friedlander point out that anyone who takes a position of neutrality concerning the reality of AIDS and art that profits from it might be part of the problem. "People see what the Whitney is doing as very neutral and that it's not their duty to connect AIDS artworks to contemporary AIDS issues," Friedlander explains. "But I don't see it as neutral because when you put these artworks up in a museum and you talk about these issues as if they were all in the '80s, how are people supposed to know that these issues are still going on? That further contributes to the stigma that we still see today when it comes HIV/AIDS."