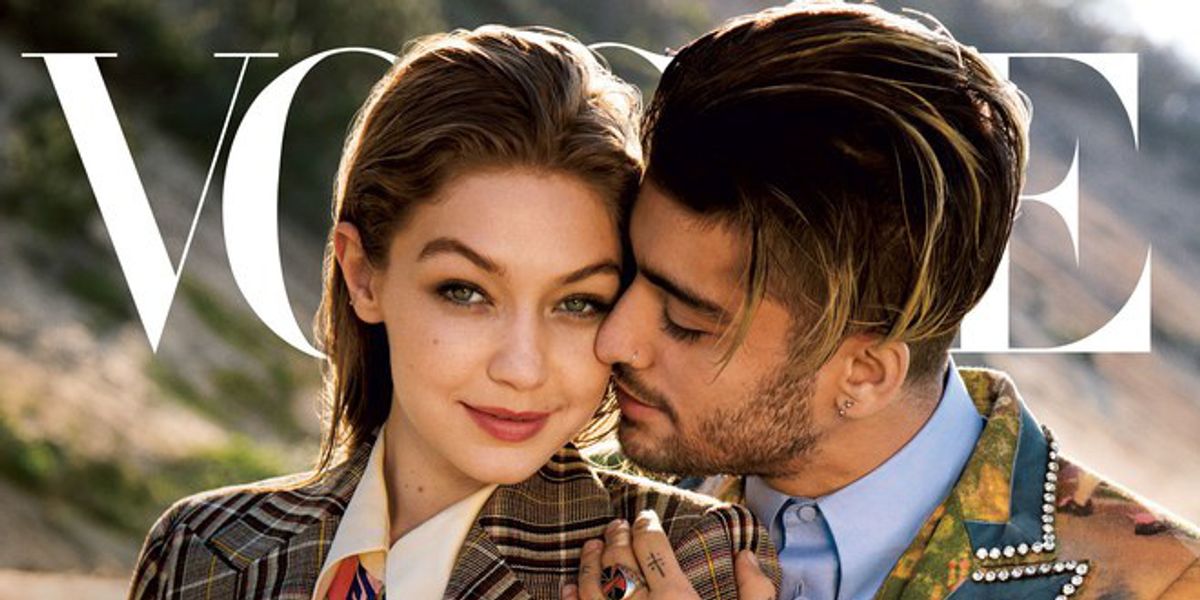 According to Vogue, Gigi Hadid And Zayn Malik Are Genderfluid

UPDATE 7/14: A Vogue spokesperson has released an official statement about the story:

"The story was intended to highlight the impact the gender-fluid, non-binary communities have had on fashion and culture. We are very sorry the story did not correctly reflect that spirit – we missed the mark. We do look forward to continuing the conversation with greater sensitivity."

Hold onto your butts people, because American Vogue just discovered gender fluidity. Or rather, they discovered that Gigi Hadid and her boyfriend Zayn Malik wear each other's T-shirts sometimes and they based a whole think piece on it. Let's unpack this, shall we?

In an essay entitled "Gigi Hadid and Zayn Malik Are Part of a New Generation Embracing Gender Fluidity,"Vogue writer Maya Singer begins with a meditation on Virginia Woolf's Orlando, whose protagonist wakes from a long sleep to discover he's switched genders from male to female. Things go off the rails almost immediately...

"The pronouns shift, but the person remains the same. Woolf's words, written in 1928, could easily be mistaken for a manifesto posted yesterday on Tumblr, the preferred platform for the growing cohort of "fluid" young people who, like Orlando, breezily crisscross the XX/XY divide. Fashion, of course, has taken note of the movement, which is sufficiently evolved to boast its own pinups, including Jaden Smith, recently the star of a Louis Vuitton womenswear campaign, and androgynous Chinese pop star (and Riccardo Tisci muse) Chris Lee. But where, exactly, is someone neither entirely he nor she meant to shop? And how, exactly, is such a person to be defined?"


I guess I'd probably define them as celebrities that dabble in some light androgyny but hey, I don't know their lives. Vogue's other examples of Generation Tumblr's gender non-conforming revolutionaries? Alessandro Michele because he designs suits for women! Evan Rachel Wood because tuxedos! Pharrell because he wore pearls one time! Young Thug because Jeffrey! But, according to Vogue, the true poster children of genderfluidity have got to be Gigi Hadid and Zayn Malik. Why, you might scream loudly into your pillow? Let's find out!

"This new blasé attitude toward gender codes marks a radical break. Consider the scene one recent morning out in Montauk, New York, where the photos accompanying this story were shot: Gigi Hadid and Zayn Malik snuggle in interchangeable tracksuits as, nearby, Hadid's younger brother, Anwar, rocks back and forth on a tire swing, his sheer lace top exposing scattered tattoos. For these millennials, at least, descriptives like boy or girl rank pretty low on the list of important qualities—and the way they dress reflects that."

Call Judith Butler, because we've got interchangeable tracksuits on our hands here! Obviously, Singer feels it's in Gigi and Zayn's wheelhouse to thoroughly explicate the intricacies of modern gender theory:

"I shop in your closet all the time, don't I?" Hadid, 22, flicks a lock of dyed-green hair out of her boyfriend's eyes as she poses the question."Yeah, but same," replies Malik, 24. "What was that T-shirt I borrowed the other day?"
"The Anna Sui?" asks Hadid.
"Yeah," Malik says. "I like that shirt. And if it's tight on me, so what? It doesn't matter if it was made for a girl."
Hadid nods vigorously. "Totally. It's not about gender. It's about, like, shapes. And what feels good on you that day. And anyway, it's fun to experiment. . . ."
Anwar, eavesdropping, pipes up. "We're chill!" he calls out from a picnic table not far away. "People our age, we're just chill. You can be whoever you want," he adds, ambling over, "as long as you're being yourself."

IT'S NOT ABOUT GENDER ITS ABOUT LIKE SHAPES, OK DAD?

From there, Singer goes on to interview real genderfluid people like Ruby Rose and Tyler Ford about their experience, but hey, by all means, let's have queer icon Gigi Hadid sum us up here.

"One day you can be this," she says, watching as Malik is buttoned into a bedazzled Gucci blazer, "and another day you can do that."