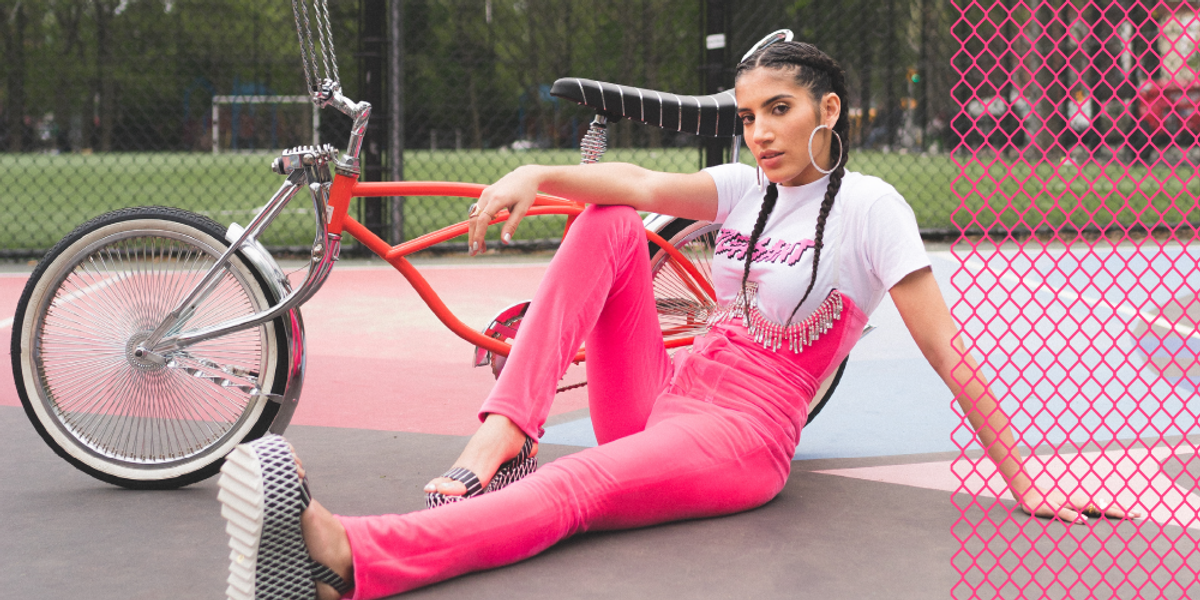 Singer-songwriter ABIR makes infectious, life-affirming tracks that showcase her powerhouse vocals. Her single "Girls" was inspired by overheard gossip in the bathroom at Webster Hall, and her newest song "Playground" is an ode to her metaphorical playground, a space celebrating friends and loved ones who don't care "if you're balling, if you're famous, if you're drinking" as long as you're down to hang. We caught up with her to talk about her songwriting process, embracing her Moroccan background, and celebrating immigrant women in the face of Trump's presidency.

Could you tell me about your sound and your influences?

I'm originally from Morocco. I moved here when I was 5, and started singing at the age of 6. My dad used to be a limo driver and he would always pick me up from school and have jazz music playing, so I would be in the back seat imitating every word of Etta James, Sarah Vaughan, Ella Fitzgerald, whoever was playing. Over the last ten years, I've found a sound that really fits me. [Part of that was] finding my producer, EFF3X, and having this chemistry where we're like, "Let's not do anything that anyone else is doing. Let's just be us. We don't want to think about anything else. That's what makes us different."

It's been a pretty long process of evolution.

When I was younger, it was talent shows and singing the national anthems at basketball games. But I would say in the last 3 years I've really honed in on my craft and tried to focus on making myself really distinctive.

I was literally just in the studio, so that's a really easy question to answer! EFF3X and I have a really simple process. He starts making a beat and is really trying to create a skeleton, and I usually lay down endless melodies until I find the right one where I'm like, "Oooh that's it!" and then I piece it together from there. I say random words, I'm freestyling, saying anything, and then I paste it together like a puzzle.

I was just watching the video for "Girls," and was thinking all the different pieces fit together well--the production, the visuals, the style.

Thank you! "Girls" was the second song EFF3X and I ever made after working together for a week. It was crazy. That song is one of my favorites ever because it's really about a night out in New York City. It's not fiction. I was so amazed at what happened in that bathroom that I was like "What the fuck! I have to write a song about this."

That was in line for the bathroom at Webster Hall right? Do you feel like in other ways, New York City landmarks influence your music?

Oh my god. 100%. I'm originally from Morocco, but I was raised in Virginia. Being in New York you always see something happening. There is always something going on, and I feel like just being in that atmosphere all the time, there's so much inspiration for things to write about. Or seeing a girl on the train with her choker makes me want to improve my style.

Living in New York has definitely influenced my fashion too. There are so many killer outfits all the time that you have to –

Step it up! Bring your game!

That happened to me my first month living in New York. I would go and search through racks and racks at the thrift store trying to create my own style. New York is like its own mood board.

People really take risks with what they're wearing, doing, performing on the subway. Speaking of fashion, I read you started getting into your Moroccan roots around the age of 19, and it now influences your style. Could you talk about that?

When I was coming up to New York, before I lived here, but when I was coming up every other weekend, I was mainly in Queens, and for some reason, I was like, "There's got to be a cool way I can include all this dope stuff from my background into every day style." I remember my mom gave me this vest that has Moroccan embroidery, and I was like "You know what? I'm going to wear this with some high-waisted ripped jeans and a crop top, and it's going to look like a statement piece." From that moment I was like, "I'm just going to keep doing this! Because this also separates me." When I wear Moroccan clothing, I'm my truest self, so I find a way to mix it with my street wear or my performance wear.

My family's from India. I was never into Indian culture as a kid because I was always trying to assimilate, but once I got to college, I was like "Oh my god! Indian clothing has such amazing colors and embroidery and detail." And now I try to wear it all the time. Having that culture really makes you stand out and feel authentic like, "Oh! This is what my family has done for generations."

In the "Girls" music video, your outfits were really awesome. I also liked the series of gifs you made accompanying the song where you all shared different stories overheard in the bathroom.

Oh yeah! We did two different types of gifs. When people listen to the song they might be like, "Oh this is a bash song." But that was never my intent or my point, so I was like, "Let me do this campaign to show people, 'Here are the girls that have a right to talk shit.'" Here are the girls who are doing something, who are working on themselves and their craft and no one can stop them.

When we released the music video with everything happening with the Muslim ban and Trump being in office, I was like, "Let's do the gifs again but with a different angle, and let's focus on immigrant girls having the right to talk shit." We got almost 40 immigrant girls who were either born outside the US or who identified as an immigrant because they grew up in an immigrant household, and we did those gifs again.

I am an immigrant Moroccan Muslim girl, so seeing all that shit on the news and see people be really devastated, seeing the marches, we were like, "Yeah we could definitely make this a statement. We have a right to talk shit, we're cool. We bring style, we bring flavor."

You have a new single, "Playground," which we're premiering below. Could You tell me a little bit about that?

"Playground" is a song about enjoying the present. Put your phone down, be with the people that you love, have a good time, don't worry about anything else. Nowadays you're on social media wondering how many followers someone has, or what they do, or if they're famous, or if they're rich. That's not cool at all. Get to know someone for who they are, don't look them up and try to figure out who they are by social media

Do you have any other projects coming up? What's on the horizon?

After "Playground" I'm doing a couple shows this summer, and it took so long for me to drop another record because I wasn't anticipating all the love from "Girls." I just wanted to put out music every couple months. I want to keep releasing content as much as I can because that's what I feel is important right now. More music, more videos, more things.

ABIR also joined the PAPER Penthouse on the roof of the Mercedes House for a stripped down set to premiere her latest track, "Playground." Watch it below.

And listen to the fully produced track here: