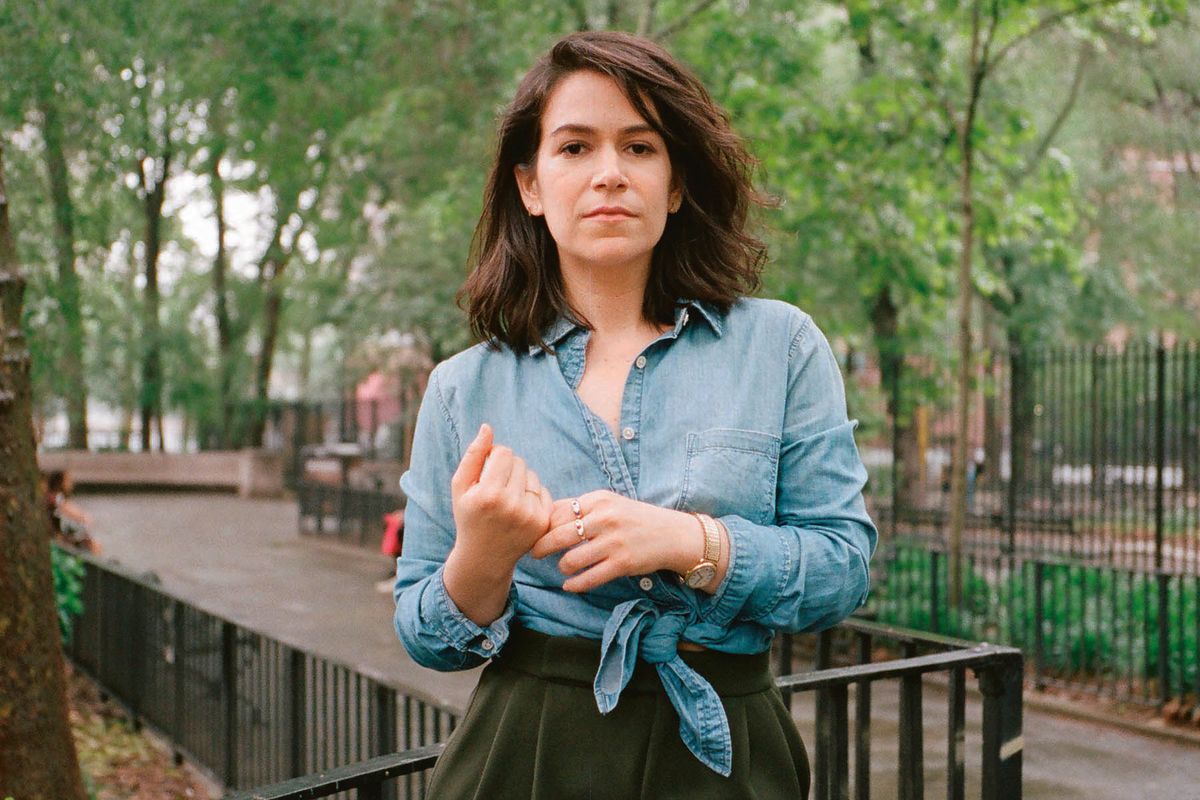 In some ways, she can be considered an enigma. In her debut collection of essays, I Might Regret This: Essays, Vulnerabilities, and Other Stuff, out now, Abbi Jacobson describes herself as an "introvert masquerading as an extrovert," and on her hit Comedy Central series, Broad City, which she co-created and co-stars in alongside long-time friend Ilana Glazer, her eponymous character comes across as an extended, exaggerated version of her real-life self — so whom are we getting in I Might Regret This?

Shortly after getting her heart broken for the first time, Abbi decided to embark on a cross-country road trip, solo, from New York to Los Angeles. The questions of "where do I go from here?" and "how I do I get there?" loomed larger from city to city, and answering them became less of a priority and more of a realization of the fact that everyone is perpetually figuring their shit out, regardless of age and experience. Abbi's exploration of heartbreak, what it means to be successful, insecurity, all wrapped in the bow that is the rediscovery of identity, is delivered to us in a sharp and wildly funny collection of anecdotes, observations, and reflections from the voice that has endeared fans and critics alike. Abbi invites her readers to join her on her trip, and convinces us, with wit and heart, that maybe, just maybe, everything will be okay.

While we've come to know Abbi Jacobson as a creator, writer, illustrator and actress, from Broad City to her voicework as the lead character in Matt Groening's animated series for Netflix, Disenchantment, to her art podcast, "A Piece of Work," with WNYC and MoMA, to her New York Times-bestelling illustrated book, Carry This Book, we've never come across the more honest and intimate side that she reveals in I Might Regret This. PAPER talked to Abbi about creating something unlike she's ever created before, below.

Tell me about shifting gears. What's it like adding 'essayist' to your string of multi-hyphenates?

I've been thinking about writing something longer-form, essays specifically, for a while now. Before last year, I didn't feel the need nor have the urge to write randomly, but I have never felt the need to write something more than this book, which blows my mind because I can't believe I did it. But I love it and I love this form.

I also love being a multi-hyphenate because I went to art school and majored in general fine arts, and I always felt shitty about that because most of my friends had more direction. I realized I couldn't stick to one thing and now I'm fortunate enough to be in a place where I can sort of get to do what I have the urge to do.

Why essays, as opposed to say, memoir?

Memoir just feels and sounds so serious, and in some ways I do take my work seriously in terms of goals and what I want to achieve and what I care about, but once I found the voice of this book, and how the voice changes over the course it, I realized it was more honest than I have ever written in my entire life. A lot of the essays are from a voice of mine; it's almost like an exaggerated voice I have — not a character, but a heightened-me — in terms of going into the neurosis in my head. They're all me — they're coming from a real place of fear and anxiety I had — but I took it in a more comedic angle that didn't feel memoir-like.

Related | Everything's Trash, But It's Okay: We Have Phoebe Robinson

So how do you compare the exaggerated version of yourself that we see you portray in Broad City to this heightened version we read in I Might Regret This?

Good question. I think the heightened version of me in Broad City — and this is something I love about my job — is that I get to play all of the anxiety, fear, and nervousness physically. Abbi's this blubbering idiot, and it's so rare that someone rants all of this anxiety and fear out loud, so sometimes when they yell "cut!" I'm like, "what just happened?" No one really expresses all of their uncertainties and anxieties out loud like that, and I get to work some of that out through my character. I'm way more internalized in real life.

I think that in terms of the writing in this book, a lot of the essays are not heightened in that way. A lot of them are more real, and I get to write my personal anxieties and fears and doubts in a totally different way where I get to explore that part of myself, much in the same way I get to do on the show, but in a very different format.

How did the book process differ from your approach to the other writing you do?

The Broad City process is a fusion that we've gotten down over the seasons. Ilana and I know how we work best, and the deadlines are very structured: we have 12 weeks to write the show, a month of prep, and we work within those time constraints in that way. I wrote this book in a little less than a year, on top of Broad City, idiotically. This book was in my mind for, like, every moment for a year. I feel like I'm such a procrastinator and I need that pressure of a deadline to get my best work done. It's a totally different process for me in that I lock myself in my office to write, whereas Broad City is wildly collaborative; it's more of a gregarious process, and writing this book was just so quiet and sad. [Laughs]

"I've felt like an internal outsider for my entire life because I just never understood what love was, that I would never get to experience it, and being a public figure only heightened that anxiety."

Whom do you want to reach with this book?

When I read it fully back for the first time, I realized that I would have loved this book — and this might not make sense — if it wasn't me who had written it. This is the kind of book that I am always searching for, so, ideally, I hope you feel like you're on this cross-country road trip with me.

There's an essay in the book that's called "Heartbreak City" which is, in a way, the thesis of the book. It's about how I've felt like an internal outsider for my entire life because I just never understood what love was, that I would never get to experience it, and being a public figure only heightened that anxiety. Writing this book after going through a wild, heartbroken year made me feel less alone, and I feel like that's such a universal feeling, whether or not you can relate to how I felt, and not just falling in love for the first time, but falling in love with a woman for the first time. I only dated men up until this point, and I was 32 when I fell in love for the first time, which is pretty old for that sort of thing. This book is for anyone who is figuring shit out, which I think is everyone. I like to think a younger audience will read it and realize that everything will be okay, but I hope it's for more than just that demographic, too.

Were you actively writing this as you were on your road trip to the west coast?

I didn't write the majority of it on my trip, but I did sort of keep a journal along the way, for myself. There's some of it that's in the essays, but it would have been impossible for me to write it and experience anything on this trip at the same time. But I was journaling about what I was feeling, and it took more form later on.

Now that Broad City is wrapping up and the book's out, what's next?

I'm producing and writing a TV version of A League of Their Own. It hasn't been picked up yet, but we've been writing the full season, so that's next on the docket for me. I'm so excited.