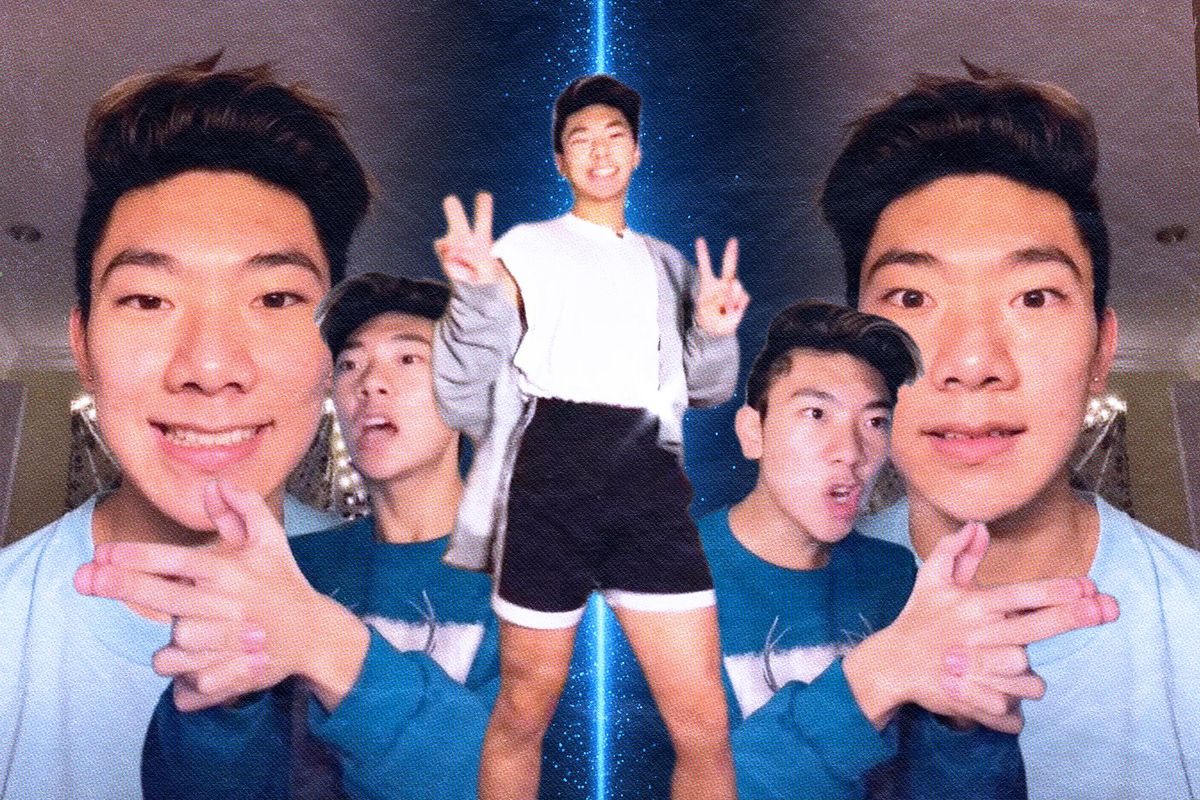 When asked to describe himself, the first word Aaron Sun used was "ordinary."

"I live a very ordinary life," he said with a slight laugh. "I don't live any differently from any other teen. I have college plans, I do a lot of academic stuff, I'm not fancy, I don't live in LA, I'm not Charli D'Amelio. I followed a very similar path to other teenagers my age."

Related | Frankie Is Now the Most Famous Jonas

However, the 18-year-old Vancouverite is inarguably far from ordinary on TikTok, where he's garnered over 6 million followers thanks to his hilarious mirror selfie rants and love of a melatonin gummy. And though there's something to be said about the relative normality of the stories he does tell, it's safe to say that few can talk about accidentally "deep throating an egg" or being stuck with the Zoom username "Big Bussy Princess" as cheekily as Aaron.

my eyes are close

don’t try this at home

Even though he's quickly become a TikTok staple, it actually took him an incredibly long time to download it in the first place, as he initially believed the platform was absolutely "ridiculous." But after a close friend "guilt-tripped" him into supporting them on the app, he finally realized it was much more than just dancing and lip-syncing. And from there, he started going viral almost immediately after posting videos this past summer — much to his own surprise.

"The first week after I got the app, I just randomly came up with an idea to use one of the trending audios, and so I made a video in the darkness of my room just for fun," he said. "When I came back to the app like half-a-day later, it had over a million views. And after that it was like dopamine, serotonin, brain chemicals, and I was so excited about that so I kept making videos. A few days after, another one of my videos blew up, and it just kept happening again and again, and I just got pulled into this funnel."

♬ hahaha i do that - Tik Toker

According to Aaron though, his most popular TikToks tend to be the fed-up, spur-of-the-moment rants he does in front of his bathroom mirror, in which he vents about "what made me angry today or what's something that bothered me." But regardless of whether he's talking about beefing with small children or an annoying conversation with his cousin, he said all of his videos are outlets that allow him to cope with the frustrations of his day.

I stay having beef with little kids

"I always try to turn something that makes me upset or is bothering me into humor, because I feel like that's how I've always coped with my anger," he said. "The way I structure my content and the way I make my videos is largely the way I would cope with my issues if I happened to have a bad argument or a tussle with one of my family members or my parents. Or something was really bothering me, I always found it would make me feel a lot better if I made a joke out of it in my head as opposed to crying about it in the corner of my closet."

Aaron added, "A lot of the jokes I'd make in my head would end up being self-deprecating. And I really tried to stay away from this idea that everything has to be positive 100% of the time, because I knew that wasn't realistic and through my own experience it wasn't always possible. So it was sort of about taking what you had in the moment and making the most out of it. I guess I wanted to see if other people shared that same idea, that same understanding."

On the topic of relatability though, Aaron also said he often tries to act as a "brutally honest" mouthpiece for the kind of rage felt by many who are regularly forced to face racism, misogyny and queerphobia, but may not be able to articulate or act on their anger in the moment. Because whether he's talking about the gross guys who rate women's attractiveness or the horrifying, anti-Chinese comments made by an elderly man on the bus, he's found that a lot of people want to listen to what he has to say.

"I try to find things that not only make me angry but make a lot of people angry. Or those things you wish you could say but you don't because there's a societal expectation that you're a good person and you're not going to punch an old person," he said, before adding that he's also been heartened by the growing visibility and warm reception of young, queer and Asian creators like himself.

"I think I'm really glad to be part of this largely Gen Z-motivated movement where everyone is learning to be more open and [ignore] what sets people apart," Aaron added. "A couple years ago it would've been really difficult for someone like me to gain a platform. Not because people are directly prejudiced toward Asian people, but because people with Chinese features weren't super out there or publicized. So I think the more people who show up in social media who aren't cis or white, the better."

and that’s on being insecure

robert if u see this goodbye

Richard if you’re watching... hit me up

Granted, he's still found his newfound viral fame to be difficult at times, especially as he continues to grapple with the "constant battle" of setting realistic expectations for success and navigating his visibility and relevancy on the ever-changing internet.

"This creator world, it really starts to seep into this [mindset] where you're expecting yourself to be successful and you're creating this dependence on constantly creating viral content. Which is impossible because TikTok is constantly changing, people's interests are shifting, and it's really hard to keep up with," he said, explaining that he almost quit TikTok entirely the first time it happened. "I think the biggest surprise for me was when I realized I was no longer making content for fun, but because I held myself to this standard of 'You have to be on the For You Page' or 'You have to get over a million views on each video.'"

And though he still struggles with this at times, Aaron went on to add that he's since entered a new phase where he's been forced to reevaluate what he was doing and whether his approach was healthy. That said, what always helps is reminding himself of the catharsis he feels whenever he's able to express his anger and frustration in a video, no matter how many people see it.

"A couple years ago it would've been really difficult for someone like me to gain a platform [...] The more people who show up in social media who aren't cis or white, the better."

"I think the more time passes, and the more I learn how to manage myself and my own emotions and understand my place on the app, I'll reach a certain point where I'm totally comfortable where I am. Just so I don't feel constantly like I'm reaching for more or scared if I'm buried under what's going on," Aaron said, before reflecting on his belief that TikTok is a "spur of the moment" phenomenon.

"Because at some point in time, people are going to put down their phones and won't come back to something they used to enjoy," he said. "But for the moment TikTok is providing me with a lot of good experience and a lot of valuable lessons. So I'm okay with just going with whatever comes up."