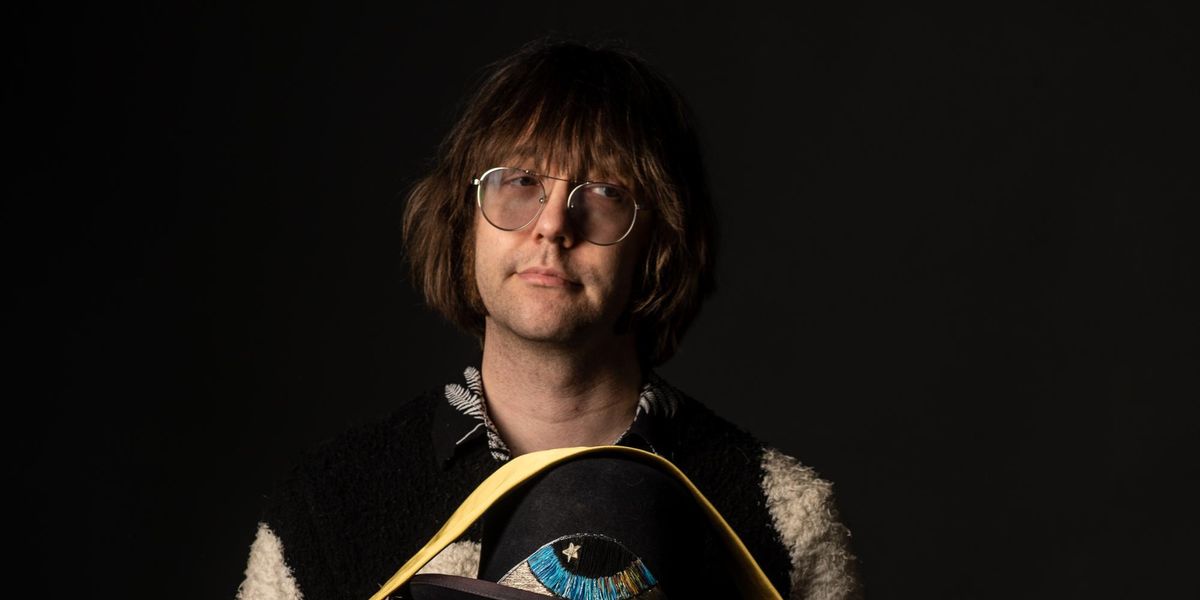 Aaron Lee Tasjan Is the Antidote for Anxious Times

Every now and then an artist comes along who makes you remember why you started listening to albums in the first place: Aaron Lee Tasjan is that artist. With his wrecked cool, off-center charm and restless creative dazzle, he makes music with conviction and arch mystique that has its roots in rock's murky past, armed with an arsenal of songs that spill over with humor, intelligence, irony, personal vision and at times prophecy; pushing boundaries of taste and imagination to new heights, unrestrained by genre or subject matter. Songs that speak to the tribe.

An obsessive creative, Aaron Lee Tasjan writes pop songs with a twist, a little overdriven, far too honest at times — performing them like ragged rock tunes that careen a little too close to the edge without actually falling over into the abyss, and autobiographical to a fault. One listen to "Feminine Walk," the musician's blatantly confessional song on Tasjan! Tasjan! Tasjan!, you realize he is the legitimate heir to early rock 'n' roll's sly sexual sedition. He updates the idea of androgyny but dispels the emotional and social ambiguity with lyrics that reflect his own geographic and artistic wanderings. Beginning in his early teens they took him from Delaware to California, to Ohio, to New Jersey, to Massachusetts, to New York, to his current home in Nashville, always looking for his psychic and musical locus.

In both his travels and in making his fourth solo album, you get the sense over Tasjan! Tasjan! Tasjan!'s 11 songs, that the man who began the album, is not the same man who completed it, transformed both by the experiences that inspired the songs and crafting them. In pursuing the muse, Tasjan found himself, and you can feel it beginning with the blithe, deceptive sunshine pop of "Sunday Women," about an elusive dream girl, to "Computer of Love," a slurry blurry cautionary about the demise of rock. "Up All Night" is part agit pop, part glam, an unexpected millennial anthem about modern romance without being precious, while "Another Lonely Day," is a haunting Zen koan full of profundity and neurosis.

"Don't Overthink It" is a strutting, sputtering minor key threat, rhythmically so dangerous, the drumming sounds like knife flicks instead of drum sticks, while "Cartoon Music," is full of ennui and unremitting boredom of someone caught in a loop, broken only by Tasjan's insistent guitar. "Dada Bois" is as clever as it is revelatory, with Beach Boy-ian harmonies so pure that you can almost feel the sea spray. "Now You Know" is a deep and naked look right into Tasjan's psyche, crackling with honesty and doubt so real you can feel the ripples of anxiety, but thankfully dissipate on a wave of hope and a final shimmering guitar note that hangs in the air like a wisp of a cirrus cloud before a rainstorm.

The last two songs "Not That Bad," and "Got What I Wanted" pick up that theme, coming to a state of grace both musically and psychically — resolving this sometimes disquieting song cycle with a chiming melody and the quiet assurance that life is what you make of it, and sometimes even more if you just get out of your own way. This is not anxious music for anxious times, but rather music as an antidote for anxious times. It is the sound of the future arriving.

"Sunday Women" is a song about people who aren't afraid to be themselves in spite of the fact that others feel threatened by it at times. I've certainly felt that way and have found myself in some challenging positions as a result. Maintaining your grace and sense of balance becomes an essential part of living in the face of being misunderstood. By now, I know I can bend but also know that I will not break.

"Computer Of Love" examines both the beauty, but also the perilous nature of human behavior that is fully present in our social media experiences. We can't quite ever see the true picture because we have to look at it all through a window that colors our perception of reality.

I just love how dumb "Up All Night" is. Being able to say "I broke up with my boyfriend to go out with my girlfriend cause love is like that" felt really good to me. Love IS like that! It's not something that exists with a set of hard and fast rules, so it feels very freeing to be honest about love and how we can learn from the nature of love.

The line, "I got dressed in what's left of my clean clothes," sums up a lot of this song for me. It's kind of about getting dressed in something glamorous even though no one is going to see it but me? There have been times in my life where I've felt the perception of me has not lined up with what I know to be true of myself. In this sense, I'm trying to see myself as I really am in this song. It's a look in the mirror but done kindly, with tenderness and loving concern for my own well being.

Certainly, the title and lyrics of this song speak for themselves, but to me, "don't overthink it" means "stay out of your own way." Sometimes things just work as they are and don't require any sort of grand explanation of close analysis, like a simple, classic black leather jacket with a hand crocheted flower brooch that looks like your grandmother's. Granny goes CB750! Don't overthink it.

The mechanical nature of the music industry can make it easy for me to feel like too much of it is based on ideas cloaked in mysterious notions that have no base in what's good for the art or the longevity of the industry. With things like Spotify it's hard to tell what the product is. Is it the artists, the songs, the drab playlists built around working out? A lot of people probably think it is the music, but in reality it's just the $10 monthly subscription. People like Daniel Ek want artists to believe they are providing a platform, but he's gonna have to do more to convince me than to simply say the solution to my problems is to release more albums at an unreasonably expeditious pace. Pay us fairly as songwriters first and then we'll talk about more albums!

I know myself so well now, but I still look at who I am with curiosity and hold space for who I will become. My constants are that I am human, queer, and that I love music, art and fashion. The rest will always be developing and I love the opportunity that simple declaration creates to always learn more and do better going forward.

When I wrote "Dada Bois," it was intended as a triumphant celebration of queer love and self-acceptance. It remains as such in my experience with it to this point.

The song "Now You Know" is about trying to find yourself in the midst of bad depression and the sense of hopelessness that can accompany the worst bouts of it. There is still the potential for all that beauty and goodness inside of you to shine through, but I have to look for it when things are really dark.

One thing I've learned is that not everything is black and white and if you can find a way to look on the sunny side, life can be pretty grand and glamorous. This is easily said and not so easily done for me, but I do make an effort to show up with a good attitude. The song "Not That Bad" is an honest look at how that process feels to me. There is a certain "fake it till you make it" type of element there, but a little bit of showbiz is a good thing and does nothing to diminish the authentic value of self-expression.

"Got What I Wanted"

There is the saying, "Be careful what you wish for," but I interpret it more like, "Be aware that when you fulfill your desires in life, there are consequences for these actions." Living in my truth has taught me there are parts of myself that are hard to be with and the way in which I handle those parts of myself is good practice for how I would react were I seeing them in another. I don't want to project my own experiences onto others, so when I see myself I have to see it all. But I know the hard parts to look at are there as a result of trauma and hurt that I've experienced in my life, so I must handle them accordingly. That way, I can actually have what I really want: a peaceful mind and an open heart.