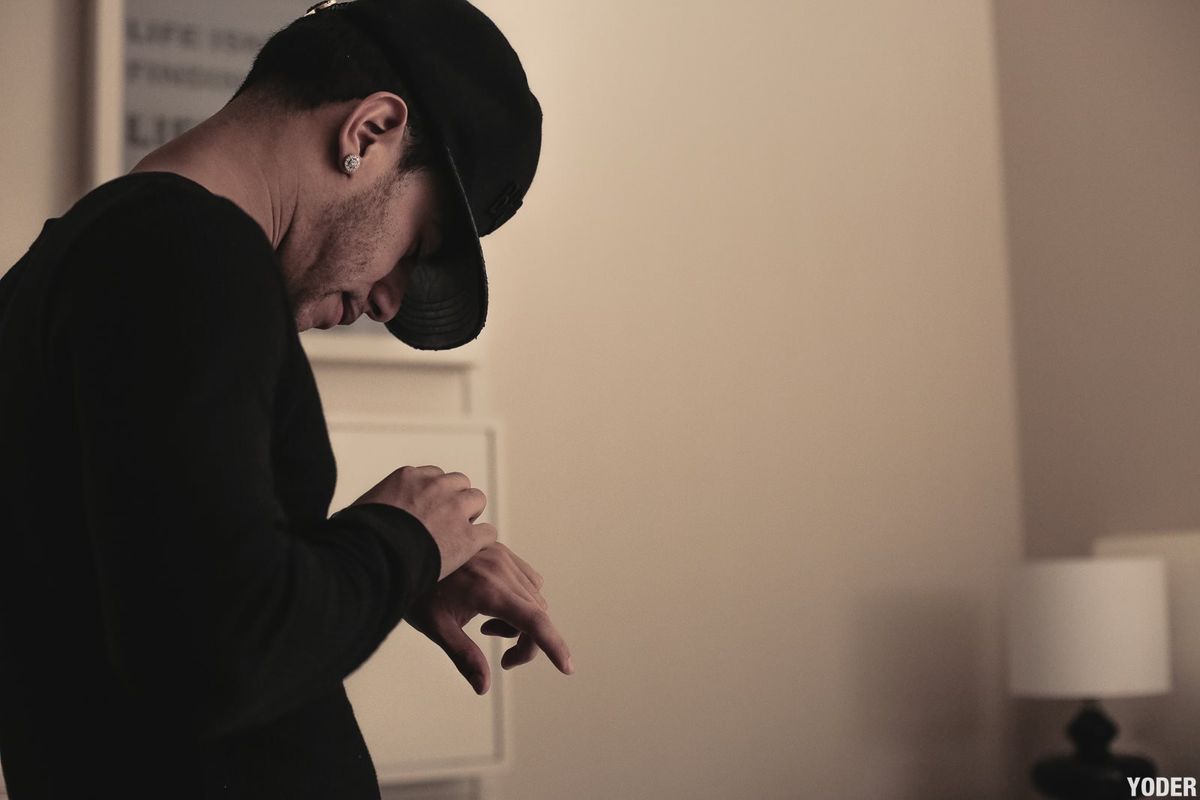 Back in late February, hip-hop/EDM producer AraabMuzik aka Abraham Orellana fell victim to an attempted robbery in Harlem. And while the altercation left him with gunshot wounds to the head, it did not prohibit the gifted producer from jumping back into the studio to finalize his highly-anticipated new album, Dream World.

And the release is exactly that -- a wide arrangement of 16 tracks that transitions smoothly through EDM, Hip Hop, R & B and back again. With a distinct mixtape feel, Orellana obviously has an ear for methodical track transitions, flipping the switch at a moment's notice from the Indian chants on "War Cry" to the sultry vocal stylings of Vchanny in "Dream". As such, we wanted to speak with Orellana ahead of the Dream World's release about everything from the infancy stages of his career to his newfound range and growth.


You started out when you were around 16 in Providence, Rhode Island, which isn't exactly a hub for hip-hop. How did you find your passion in both hip hop and EDM and eventually gain your footing in the music industry?

I've always had a passion for music -- that wasn't really something I [worked on] or decided on. So I just wanted to expand my talents and start producing my own music. Me coming from a musical family, and playing instruments, I wanted to just create my own beats and music. When that started I was able to learn and create lanes for myself as a music producer. That's when I started exploring different types of genres of music. That's basically how it started.

Since then you've been able to produce tracks and work with a lot of huge names. How has it been to work with artists like Kendrick, Cam'ron and Alicia Keys?

I started off working with Cam'ron and then Diplo in my early stages. Then I started branching off with different artists such as A$AP and Alicia. My sound has changed a lot to [the point] where I'm able to work with these types of A-list artists. It's important as a musician to be able to be versatile, definitely.


You mentioned before that you played keyboard and drums, so as a person who plays traditional instruments, what do you say to those who perceive mixing and sampling as a 'lesser' form of art.

I mean, manipulating songs and samples and chopping them up and making it your own is definitely a skill. Not anyone can make something out of nothing or take something and make it completely their own. My generation [was definitely all about] chopping up samples and making crazy little songs and beats. But the new age now is definitely not like that at all. I'm not really hearing that in anything nowadays. People from the South and the West Coast aren't too heavy on samples. The East Coast is definitely where you hear that most. Right now I'm trying to bring it back to those [sample-heavy] times. On the album, I have just a little bit of everything, [every] type of music and style. I wanted to give the people just a little bit of everything.

Listening to the album, the variety in your samples is really impressive -- but it all still sounds like you. What's the selection process and creation of this range like?

I actually created the whole Dream World album last year, but it sounded so much like [my debut album] Electronic Dream, I didn't feel there was enough growth. I was literally only catering to my electronic fans. So I decided to make a more eclectic album. I dedicated 1/3 of the album to the genres I cater to the most -- electronic, hip-hop & R & B, trap and bass. For example, my process for "War Cry" initially started by me looking for African tribal chants and after I came across the right video with a chant that I was vibing to; I sampled it, chopped it up and altered the melody of the chant. I also added my signature drums and breaks. I found a dope Indian chant that I included in the track as well and then added it as the hook. I like to have a number friends in the studio with me, so their responses to the tracks I create helps me know I'm headed in the right direction. It's basically the same process I use when producing all of my music, no matter what the genre is.

You're also well-known for your ability to improvise and freestyle with ease. Can you walk me through the stimulus of that improvisational experience?


Most of the time I don't think. I just pick out the sounds and start playing around with different styles or whatever way I want to do it. I pretty much freestyle everything I do. I don't really have a plan or anything when it comes to creating. You know whatever sounds good to me, I just go along with it. If it comes out the way I like it then I record it. It's the same way with my live performances. I just do everything live, on the spot. None of my shows are the same. It's all live and I always play the music differently.

To producers. When a rapper invites u to the studio and asks u to make beats on the spot.Tell them to pay your fee on the spot,cuz fuck that
— FLYLO (@flyinglotus) June 15, 2016

I'm sure you probably saw that Flying Lotus tweeted about producers having to own their own worth, especially in relation to rappers. I just wanted to know your thoughts on that.

FlyLo has a point. But I don't experience this too often because I have long-term relationships with most of the artists I produce for. There are incidents when rappers expect everything for free though. Those type of rappers come across as if they are doing you a favor but in actuality it's a collaboration and I bring my core fan base to the table as well, so we can all benefit off the cross-marketing and make money.

What do you think this album will say about your growth as both an artist, or even as just a person?

This album [is] an album worked on for so many years now. I feel like I've progressed a lot and definitely been working to own this point now. I'm definitely excited for the album I put together. I definitely appreciate the wait [since] it's been on hold for so long. ... I just want to thank my fans and people who have supported me throughout the years. Just for all the loyal fans I have out there I know it's something they'll definitely appreciate.

AraabMuzik's Dream World is out now via Empire.