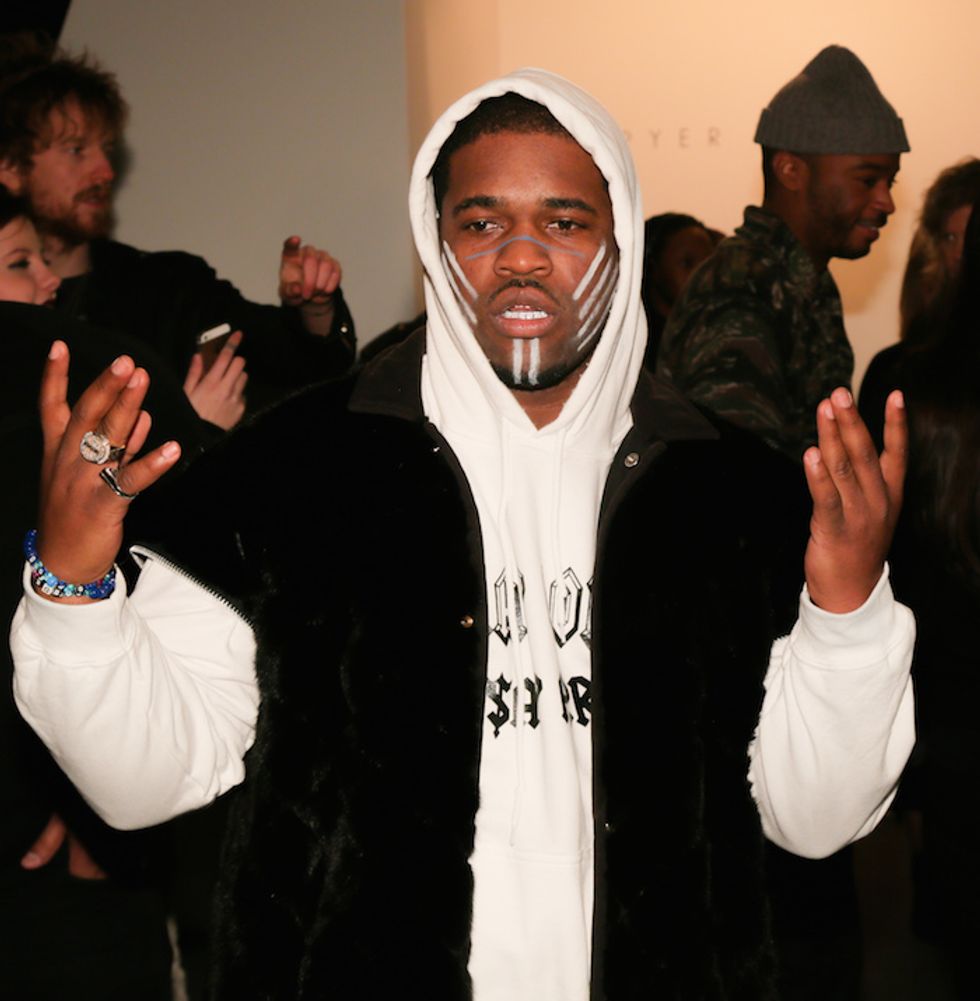 A$AP Ferg on His NYFW Face Tattoos: "All the Girls Thought It Was Cute"

by Mickey Boardman
PAPERMAG
A$ap Ferg working the tribal face paint at the Pyer Moss show at Milk Studios. Photo by Max Lakner/BFAnyc.com
NYFW is a magnet for artists of all types who see clothing as a way to express their creativity. Artists, social stars, singers, actors all rub elbows with editors and buyers as they check out the latest get-ups from our favorite designers. This week I made friends with  rapper A$ap Ferg, who caught my attention with face-paint tattoos and warmth. I chatted with Ferg about his impressions of fashion week.

Did you go to a lot of shows this week?

What did you think of Jeremy's show?

It was a beautiful show. So many people came to show love. Jeremy actually hangs out with the A$AP mob. We really have a strong relationship

How do you decide which shows to go to?

It's usually people I admire or people I'm curious about. I want to see their art. I always wanted to go to a Moncler show -- they bring the theatrics. This year, the stage was a huge heart-shaped box of candy and the models were the candy. I thought that was pretty cool. What they bring to the table is really dope. The Kanye show, I just wanted to see what he was doing with Adidas. He played some dope music from his new album. It was well worth it. It was worth losing sleep over.

How do you choose what to wear to the shows?

I wound up keeping it simple today. I began to bust my brain over an outfit and that's never good. Sometimes simple is better. At heart I'm a designer and artist. I just want to see my art on people. As an artist coming out you still got to get dressed. The other day, I decided to do some innovative stuff with the face paint. Fashion is more of a fad that passes along. When you have style, you can wear art. You can come through with tribal face paint. It was so fun -- I got a chance to see how people with tattoos on their face feel. I took the train that day and I got all the looks. Some people loved it. It put me into a different character for a day. All the girls thought it was cute.

What other show did you go to besides Jeremy and Kanye?
I missed the Alexander Wang show and Opening Ceremony. I saw Astrid Andersen. I went to her showroom and I wanted to leave with all the coats.

How are you going to recover from the excitement of Fashion Week?

I'm still overwhelmed and souped up. I say I wanna go to sleep and I can't sleep because I think of the people I've been meeting. Jeremy was telling me about a twitter conversation he had with Cara Delevingne about me. I have a lyric in one of my songs, "my walk is meaner than Cara Delevingne." Cara tweeted "I love the song but there's no way your walk is better than mine." I thought that was cool that everyone was tuned in. It's a small world between all different mediums of art, like music and fashion. But we all come from the same world. We all live in the same world. It's better when we meet up and get to do everything together.