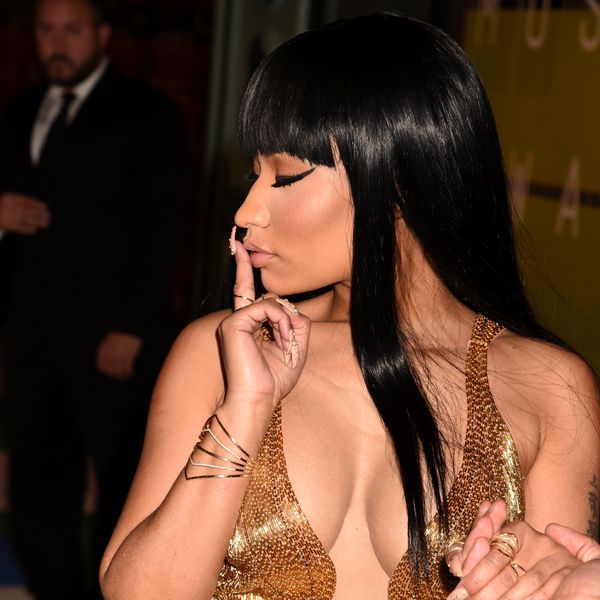 One night when I was up late, I found something I intuitively felt could ease my growing sense of dis-ease: the gift of silence.

It's no secret that many Millennials suffer from a particular strain of anxiety that translates to less time away from real-time interactions and more time spent alone consuming all manner of media. It's all noise and more noise. For me, this looks like hours past my bedtime scrolling through Instagram and scouring the web for docudramas about female murderers, random YouTube rabbit holes featuring pimple-popping, Google image search results of "Drew Barrymore in the '90s" and "Illuminati rituals," and regular search results including "Does rice make you skinny?"

There are benefits to this kind of activity: being "plugged in," as it were, means wider social networks that I could reach out to if I wanted. And, of course, there are numerous drawbacks, including but not limited to: increased symptoms of anxiety, depression, isolation, sleep deprivation, and a restless, irritable, and discontent monkey mind racing at 1,000 paces per millisecond.

I work in media. Sometimes it feels impossible, because of my job's requirements alone, to truly unplug. This is certainly a product of being raised in the Internet age. This is also a product of my own lack of self-discipline, and also likely, some MK Ultra programming from watching too many Lady Gaga videos because Satan.

People (or is it Oprah?) always say the only way out is through, but for me, it all reached a fever pitch recently: stressful news surrounding a dying family member and a move to a new borough within New York City, which is known for its premium on all-that-overwhelms, combined with de rigueur work-life demands, all piled up and I need to not just get through, but out.

I've been a fan of meditation for about five years. The ability to carve out definite space for my own sanity is not only a blessing, but now more than ever, it is absolutely essential for me as a black, gender nonconforming queer person in 45's America. I often talk with my friends and support network about the importance of finding, curating, and protecting safe spaces for people like me. While the world is changing despite resistance from patriarchal powers that be, the fact is, there is still a system at large that would rather see me and my kind extinct than reaping the benefits of living my best life. So to sit still and remember that inside is the safest space of all for me; to remind myself that actually, no one can hurt me — when I remember to do that regularly, daily, even — it's literally a breath of fresh air.

Anyway, during my last binge of late-night dark night of the soul existential din, I stumbled across a Facebook event invite (which, remarkably, I rarely check), to a silent retreat in a remote town in Rhode Island. The invite was from a friend of mine, a meditation teacher who happened to be co-facilitating the event. In the moment, my reaction was resistance, which is customary for anything I feel could pull me out of my self-prescribed rabbit holes. I told myself, I know little about this except for its housing of ritzy private schools like Brown and Rhode Island School of Design. There will only be white people there and they will all hate me. I can't get there by taking one train on a nonstop trip, so why bother? As that last thought barged in, another one, quietly but loud enough for me to hear it, cropped up in its place: Why not bother? Don't you think you're worth it?


Despite my resistance, there was an opening. I've learned through my experiences that opening up even the tiniest mustard seed of willingness becomes a gateway to change. And that moment of silence opened me up for almost a week of it, where still yet more resistance came up.

When I arrived in Rhode Island, after taking two trains, including a transfer, and being driven by car to the house I'd be staying in with five other strangers and the three facilitators, I thought, This house is too big. I'll get murdered in it and no one will find me.

After a welcoming dinner of the most delicious vegan soup I've ever consumed, the facilitators introduced to our new home, where I immediately felt drafts of cold air. This won't work, the diva in me boomed to myself. In entering silence in t-minus a couple hours, who would I complain to? There was no manager present, really, since we, as spiritualists from different walks of life were all on the same playing field as silent, sentient beings, so I would have to manage myself (and my reservations). Yes, in silence. It had begun.


I know my body and know I can't sit on the floor to meditate or do much else in any position for longer than five minutes without feeling like my bones are breaking, and that's totally my bad. But you know what? There were chairs available.

I don't tend to eat vegan food options much, so I had this horribly embarrassing image of myself running to the bathroom fifty times a day to relieve myself, and maybe that's my bad, too? But you know what? Everyone had to use the bathroom, because that's what the body does.

I really hate being cold outside, inside, any side, anytime, and swore I was gonna lose it because gah, why isn't it SUMMER YET? But you know what? I am fortunate enough to have layers of clothing to choose from when I'm cold, so I simply added them as needed.

Over the next several days, my spirit really wanted to resist the 6 AM rising time, the fact that I couldn't snap a stage selfie next to flowers backlit by a gorgeous sunset, the sits which only felt too long when I had thoughts other than perfect peace, and anything the meditation instructors said during dharma talks that gave rise to the cynic in me. I wanted to make sounds and grunt when I needed someone to pass me the salt at dinner. I wanted someone to see in my eyes exactly what I meant and respond accordingly, but people aren't mind readers. For every situation where I wanted to resist and break into full sentences, I remembered that I couldn't really. What could I say that would let people know more about me? Eventually I (or my ego) grew tired of fighting, and so, I let go. The thought popped up again that led me to signing up for silence in the first place: Why not bother? Don't you think you're worth it?

The answer was no. The environment was this type of container that seemed to constantly imply that silence affords us the gift of knowing who we really are. I didn't think I was worth "all this effort" because I didn't, in those moments, want to know who I really was and am. And yet, there I was.


What broke open for me during the heart practices focused on teachings like "See Hear Feel" from the teachings of mediation teacher Shinzen Young, or "Open Awareness," from Adyashanti, or the ages-old Loving Kindness metta Buddhist meditation practice was my heart.

When you think of yourself, someone you love, and eventually, the whole world, full of suffering and joy, and say to all of those entities, "May I be safe, may I be well, may I be happy, and may I be at peace," how can you not open up, and dare I say, cry a little? Who am I kidding: the waterworks started and were not stopping easily.


Also present in the teachings was the work of spiritual author and educator Byron Katie, who is perhaps most famous for inventing the concepts known collectively as "The Work," and the four questions that the work is based on. My silent, patient contemplation of the answers was the most notable game-changer for me. Proof:

Original statement: "I don't think I'm worth it."

When I finally spoke fully again, almost five days later, I had this sense I knew what I needed to do going forward, and I was reminded of who it is I want to be. Going inside reminded me that I can go anywhere — back to NYC, back to my job, back to my life — but there's so much to do right here.