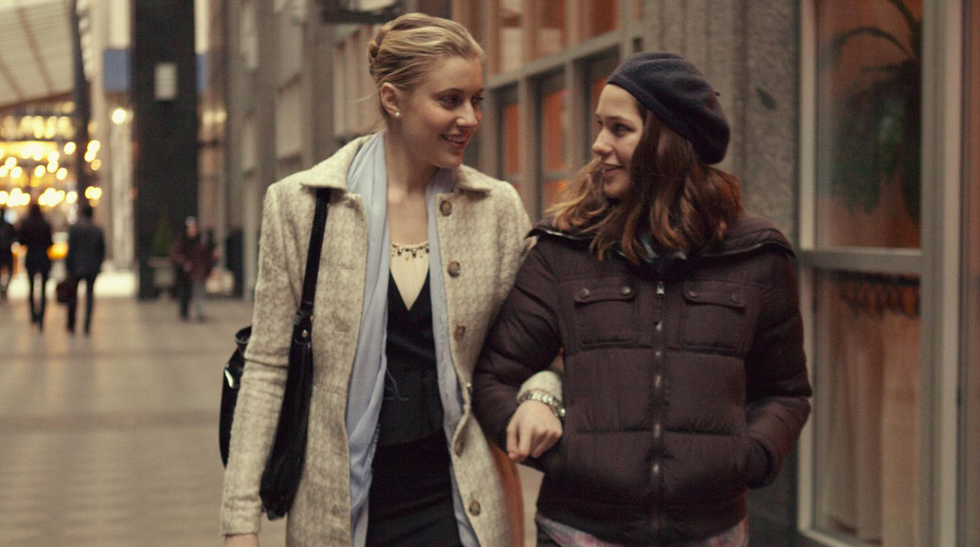 New York City has had a long history of providing the backdrop for cutting-edge cinema, but several films at this year's Sundance Film Festival managed to put a fresh spin on the 'New York Story.' Whereas films by Woody Allen or Martin Scorsese romanticized what was still a dangerous and dirty city, these movies emphasize the enduring grit and struggle within a safer, more glittery New York. Relationships and the dream of fulfillment take center stage when other basic needs are met, and often these emotional struggles have much more immediacy than the physical danger that has long since ceased to be an issue for urbanites. Topics like the difficulty of meeting people in a bustling metropolis, prohibitive cost, loneliness, problems of aging, mental wellness, identity, income security, the stress of having children, and the condition of happiness are all tackled through stylishly-erudite developments in narrative storytelling and honest depictions of interpersonal relationships. Read more about these exciting "nu-New York" films, below.

Josh Mond's beautifully-written depiction of a self-destructive New Yorker coming to terms with the slow death of his mother made James White one of the most poignant films at this year's Sundance. Christopher Abbott (James) delivers a stunning portrayal of the kind of New Yorker who gets into bar fights because he can't deal with the stressors of his mother's (Cynthia Nixon's) all-consuming hospice care. The film's intimacy is heightened by a crisp, bleating score from Kid Cudi (who also stars in the film) and sophisticated closeups that Mond designed to mirror the fact that, as the director put it in a press conference, "life in New York City doesn't stop, so there's no time to retreat to process your emotions -- you have to deal with it."

Greta Gerwig and Noah Baumbach's latest project moves beyond the endearing mumblecore of Francis Ha with stylized dialog and situational humor that could only take place between characters as self-absorbed as those who parody privileged New Yorkers. When Tracy (Lola Kirke) becomes disillusioned with college life in New York City, she writes a story about her impetuous would-be sister-in-law Brooke (a Soul Cycling and tweet-loving Greta Gerwig) in order to get attention from the college Lit Society. As her personal relationship with Brooke unravels due to this seeming betrayal, each character's idiosyncrasy heightens to the point that they start to resemble characters in an SNL sketch about narcissistic borough life: "There's nothing that I don't know about myself," Brooke declares in a moment of insight. "That's why I can't do therapy."

Kristin Wiig, Tunde Adebimpe, and Sebastion Silva tackle the trappings of modern bohemia in Nasty Baby's disarmingly raw depiction of friendship and loyalty. Freddy (Silva) is an artist who wants to have a baby with his partner (Adebimpe) using Polly (a capable, charming Kristin Wiig) as a surrogate. The trio struggles with harassment from a mentally-unwell squatter, and between the trips to Brooklyn Boulders, the 311 phone calls, the noisy neighbors, and the cats, the film ultimately depicts life in Brooklyn with pinpoint accuracy, even when a dark turn of events threatens to dismantle their lives.

Flight of the Conchords' Jemaine Clement plays Will Henry, a graphic novelist whose untimely divorce lands him in a studio apartment in Astoria that even his kids think is "far away" from the rest of New York. People, Places, Things addresses the livability of the outer boroughs and the messiness of family life there. Will and his ex-wife Charlie learn to navigate the stressors of having children in a frenzied city while searching for (and ultimately finding) themselves in the process.

Sleeping With Other People

Jason Sudeikis plays a smooth-talking lothario in a wickedly-clever romantic comedy from Leslye Headland, who rose to fame as a comedy writer with 2012's Bachelorette. Alison Brie plays Lainey, a woman Sudeikis lost his virginity to at Columbia back in the '90s and the film centers around their reunion at a sex addicts' meeting years later. After reconnecting, the two embark on a platonic friendship with hopes that each can support the other on the road to recovery and romantic fulfillment. In addition to staging what may pass as the most quotable date-banter in modern entertainment, Headland's film addresses the aspirational quality of New York with pointed, subtle acuity. Sudeikis takes his dates to brunch; Lainey's gynecologist's office has a stylish chandelier and babydoll furniture. Meanwhile, Sudeikis' best friend and business partner (the hilarious and brilliantly-cast Jason Mantzoukas) can't wait to "sell out" and "buy a Tesla".

Fans of the FX series Archer will appreciate the wry humor of the independently-produced and animated series Animals., which aired as a Sundance short created by Phil Matarese and Mike Luciano. Animals. depicts the lurid activities of the creatures that New York City typically casts as pests: rats that are trying to get laid, body lice that have infiltrated the Mayor's undergarments, police horses griping about their "9 to 5" and making suicide pacts. It's an unexpected reminder that New York City is actually teeming with non-human life, despite how uninhabitable the city may seem with respect to the natural world.

For the first time since his girlfriend left, Noel returns to Greenpoint to eke out a lonely existence living in a camper and selling Christmas trees for the fifth straight year. He hides the pills that he uses to grapple with his loneliness in an Advent Calendar and must deal with constant reminders of his ex whenever he interacts with the young couple who do the day shift at the tree lot (he takes over at night). There's a feeling of entrapment in Noel's experience, as director Charles Poekel purposefully designed his shots to feel claustrophobic (you never really leave this one Brooklyn block). Ultimately, it's a quietly moving film that doesn't sacrifice achieving a sense of reality for outlandish plot lines.