A Seoul Songtress Tells Us About Her City's Music and Nightlife 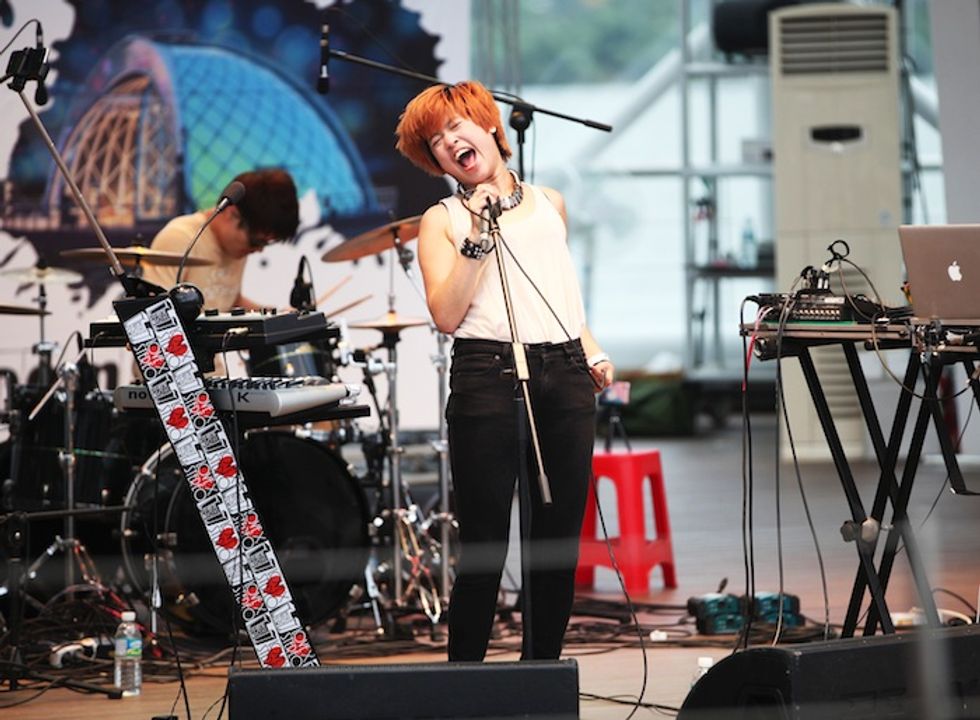 Each week in our new column, "No Sleep Til...," we'll be talking to cool kids around the globe, asking them to fill us in about the bands, DJs, music venues and night spots they and their friends are obsessing over. Next time you visit their home city, leave your Fodor's and Lonely Planet guides behind and go party like a local instead.

Where do you live?

What do you do?

I am the vocalist/keyboardist of my band Love X Stereo. I also work as a producer of SEOUL Magazine -- a travel and culture magazine for foreigners.

What type of music does your band play?

Basically, our music is alternative rock infused with electro elements. We like to create grand-scale, energetic, powerful, almost overwhelming sounds that contain majestic, futuristic vibes. We are very open to any type of genre, and like to mix all the elements into our own style.

How long have you been making music?

All of our members have been playing music for over 10 years. Our leader, Toby, is actually one of the pioneers of sk8 punk rock here in Korea.

What South Korean bands or DJs are you obsessed with and think more people should know about?

Hmm.. that's a hard question. Because honestly, our music scene is still in the developmental stages right now. We would so like to have a certain band or DJ that we could be obsessed with, but unfortunately we don't. We do have bands and DJs that we like, absolutely. We like dnb DJ J-Path, and experimental grunge band The Quip.

We performed a lot with The Quip. Their sound is very unique, noisy and pretty much 'drunken alcoholic' -- it's the opposite of our music. Their music is really, really raw and crazy, as opposed to our music, which is so, so elaborate and futuristic. J-Path is 'the best' dnb DJ in Korea. No doubt about that. His sound is very dynamic and rock-based. Actually, he happened to be at one of our shows and contacted us, suggesting a collaboration. Pretty stoked to work with him soon.

Where are the cool places to see live music in Seoul?

Obviously, Hongdae area. Hongdae stands for Hongik University, and they have the No.1 art institute in Korea. So you see, it's the most artsy area you can find in Seoul. The area is basically the birth place of Korean punk rock in the 90s. Not only punk, but all sorts of indie music is happening every minute in the area. There are a lot of live clubs here, and you can easily meet numerous musicians performing at these venues. But these days, a lot of dance clubs and lounge bars are [taking over]. Many people come here to simply dance, enjoy rock music, and get drunk all night long.

What are your favorite bars or nightclubs in Seoul?

My favorite spot these days is Col.l.age+. It's located in Cheongdam-dong (very far from Hongdae, right in the middle of Gangnam). It's a new multi-functional space (restaurant/bar/gallery/club), but the space itself is aesthetically mind-blowing. Check photos here. It's a place for someone who'd like to experience a whole lot of culture. Most days it's a hip restaurant, but whenever they have a party or a live show -- or an exhibition maybe -- it automatically transforms into something completely different. Illustrations of a blue sky with white fluffy clouds are all over the venue from top-to-bottom so it's visually very striking. I wouldn't call it a hipster place, but it's definitely the hottest place right now.

What do you think of Gangnam and what's its reputation among cool Seoul kids?

Hmm... I personally don't like Gangnam -- [the area on] the south side of the Hangang river -- that much. It is definitely a posh place, but to me, it lacks culture. Gangnam seems to be very wealthy, expensive, hip and posh; it has nice new buildings, posh boutiques, the best shopping places, pretty girls, huge new nightclubs, and all the fancy stuff. But the traffic is hell and the vibe seems to be a bit shallow. A cup of coffee could go more than $20 easily. On the other hand, Gangbuk (the north side of the Hangang river) has way more culture and history. There are lots of palaces and museums -- it's more old-fashioned but more authentic. I prefer Gangbuk over Gangnam. But a lot of hipsters and wealthy kids will disagree with me.

As a Korean musician, was it weird that Psy became the big K-Pop crossover artist who's popular in the U.S. and around the world?

Yes. He himself said that he kinda knew "Gangnam Style" would be a hit in Korea, but he never guessed that the rest of the world might like it. I'd have said that the song would've been on the charts for maybe a few weeks, but it could've been a hard fight with all these K-pop idol groups. So, yeah, it was shocking indeed.

Finally, what's a bar or nightclub you would NEVER go to in Seoul?

I will never perform at Woodstock again. Not that I don't like the venue itself, but that bar was one of the worst places we had to perform. We were already upset when we figured out that there was nobody in charge of the outboard mixer, but we really got angry when one of the customers deliberately and easily turned down the volume without even discussing us. At first, we thought that the guy was some sort of engineer, but turns out, everyone had access to turn up and down the volume at that bar. Wrong!