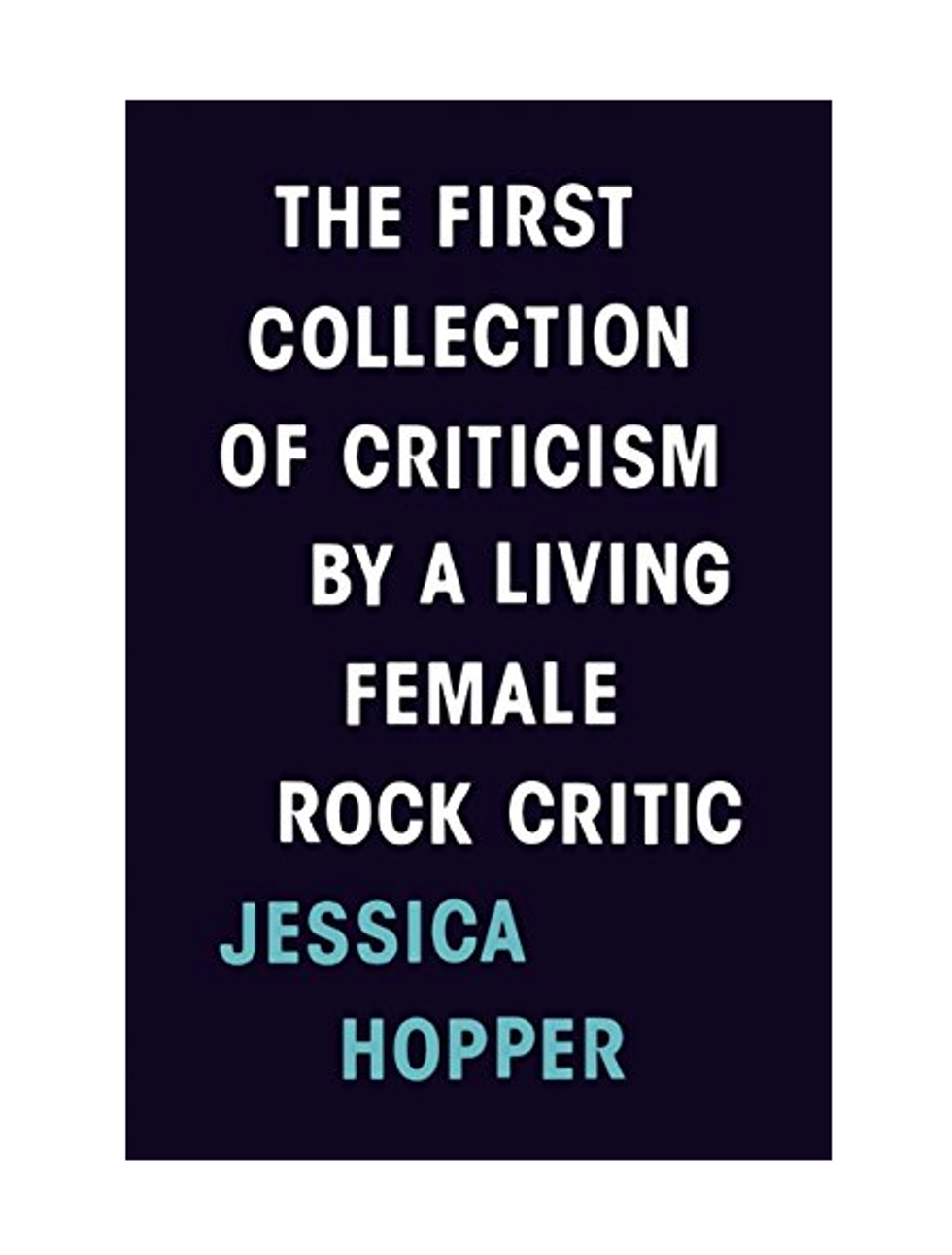 by Maud Deitch
PAPERMAG
With her new book, The First Collection of Criticism by a Living Female Rock Critic, Jessica Hopper is proving that you don't have to be an old dead white man to be canonical, and, even beyond that, is making way for a whole new generation of bold, brave, groundbreaking female rock writers.

It seems glib to say, but Almost Famous made me want to be a critic. Reading Lester Bangs and imagining myself on the road, trying to get the truth from the music that I loved became my singular goal, and it wasn't until I was 20 years old and interning at The Fader that I learned that I'd been idolizing the wrong heroes. Fader's then-editor-in-chief Julianne Escobedo Shepherd became my mentor, and educated me on music journalist and former VIBE editor-in-chief Danyel Smith, her mentor. I started reading all the women music critics I could, digging around for Ellen Willis essays, reading Ann Powers, and bookmarking a blog called Tiny Lucky Genius, written by a woman named Jessica Hopper. That was seven years ago.

It never occurred to me that there hadn't been a collection of criticism by a living female critic until I saw the announcement for Hopper's book, and it shocked me: in 2015, most of the critics I follow closely are women. Despite this proliferation of female voices, the "canon" -- particularly when you're talking about rock --  is still largely populated by men. Hopper's book title is part fact, part commentary on this very thing: history has painted female critics as rare, when they're anything but. I spoke with Hopper a month prior to the book's release primarily about that title, her place in the rock critic canon, what exactly being a female critic means to her, and most importantly, what it can mean to the future generation of writers.

The forward and the title of the book are so interesting, and as someone who grew up with the idea of the critic, and wanting to be a critic, I'm interested in what you think the female critic is and how you're approaching that with this book.

What I always aim to present is, as a critic, but as a feminist critic. I don't necessarily go by, 'I am a female critic,' I'm more like, 'well, I'm a feminist critic.' From the first thing I wrote, everything was from a perspective that I knew very early on was underrepresented. I would go to shows and half the people there, or more, would be women, and there were always a handful of very visible female critics. I read everybody and I take inspiration from many places, but reading pieces that understood a band from a place that wasn't a 27-40 year old white male's perspective, and filled with what people with that perspective value in music, was pretty rare for me.

When did you first start writing about music?

When I was 15 or 16 years old is when I started getting my first checks for my rock criticism, and that came from when I would read the local papers in Minneapolis. I would call and say, ' you got this whole article wrong, and you guys don't understand this band like I do.' I really felt like I was living in a time in Minneapolis where bands like Babes In Toyland -- who were the sort of band I was seeing every week -- were being labeled by men as being 'caustic,' or 'hysterical,' rather than 'canonical.' Whereas I thought Babes In Toyland was the greatest band that had ever existed. Because it spoke to me so loud and clear.

What made you go from feeling like a band you loved was misunderstood to becoming a critic?

I knew my perspective mattered, so I was pretty assertive about putting it out there. We see that a lot today -- that there's a lot more value being placed on a multitude of perspectives in music media, and I feel like that was a long time coming. I think there was so long where we defaulted, and in some places we still do default to a macho ideal of good; a white ideal of good; and when I first started writing about music I was, like, in 10th grade and I wholly did not subscribe to the ideals that were being put on me.

Is there something in your upbringing that you feel empowered you to say 'I don't agree with you, and my voice matters?'

I was influenced by my mom, who's a feminist. But my mom was two things -- my mom was also the editor of the daily paper in every city I lived in as a child, and would come home at night only after she had closed the paper. There was a particular work ethic to that, and I grew up in newsrooms. My dad is a journalist and my stepdad was a prosecuting attorney who mostly did rape cases, and serial murders, so I grew up with these really staunch ideas about the importance of the truth, whether it be journalism or what my parents do for a living. I knew what my truth of experience was.

You were very involved with politics as a very young teenager, how did you transition to writing about music?

I had a lot of interest in my own independence as a woman, and I saw a lot of the truth of the way women were treated in the world because I was paying an inordinate amount of attention. I loved music and I got burnt out on a lot of that political stuff...I was speaking at pro-choice rallies and stuff. I took myself very seriously -- and then I found punk rock. Shortly after getting into punk rock was the first Bikini Kill tour in the US and I was working in a record store and the people I was working with were like, 'we have this Bikini Kill tape and this seems like your kinda thing.' And through that I found a place in the world that was everything I was interested in, underscored a lot of my beliefs, and gave that feeling a name, and that was radical feminism and punk rock. All of those things, I believed in quite altruistically.

Part of the reason I gave the book the title I did is because I feel like there are days when it just confounds me that some of these wonderful young writers who are light-years past where everyone is at 21 and 22, have to endure the same stupidity that I had to when I was coming up 19 years ago. I was lucky that when I was their age, people had to be angry enough to confront me in person, or people had to write me a letter. You have to be really angry to write a letter, as opposed to firing off some irate tweet and hoping it scalds the other person, the person you're looking to undermine. I think now young female writers, or young writers who aren't straight white dudes, have to have another layer or resilience in order to have a strong opinion.

Do you think this changes the quality of the writing that people are putting out there?

I think that's why you have a lot of people who are pretty wishy-washy writers, people who are afraid to have an opinion, because they're afraid Twitter will come after them. I've had my fair share of controversy in the almost two decades I've been writing, and I feel kind of immune to that, and it's a joy. It comes from not feeling like I need permission, but one of the things I try and teach the writers I work with is to not be afraid of backlash, because it's not the same as failure. And I know that failure can be very instructive, as someone who has failed spectacularly. When you're just succeeding, you don't learn shit. I think being a writer, in a lot of ways, is a lot harder than when I was coming up, and I try to help folks however I can.

It can feel like being silent is safer than being wrong, as if there can't be any room for creativity. If your choice is between speaking your truth of the music, and your experience of it, or, god forbid, being doxed by someone -- you're like, 'I guess I won't write this tweet,' or 'I guess I won't write this article.' And then you're existing in a kind of a cloister, and nobody gets to be a better writer, and more so, people don't get to connect with that experience.

Does that relate back to the book and its title?

I think in some ways, part of the reason I did [the book] and part of the reason I gave it the title it has, is because a lot of women write in isolation. We write from the place that every woman is the first and every woman is the only, and the title of my book intended to blow that out, to say, 'OK, well people can't keep saying there's no precedent, or that women are by the margins, because most of the music writers I know are women.' Part of it is how women's work is portrayed and women's history is reported -- it always makes it seem like we're new to the scene, that we're interlopers, that we're really up against it. All of these things, in some ways, are true, because of the patriarchy, but part of it is also how what we do is portrayed -- that perception that we're somehow new here or that our voice is coming in from the margins. We're here, we've always been here, and we'll continue to be here.

Did people tell you that you couldn't do this book?

People would say 'oh, that only happens once people die.' Or, 'you're not canonical,' or these excuses that were like, 'well that thing doesn't exist.' And in publishing, precedent is very important. So until someone does super well, you can't have that book. I would be like 'well, what about Chuck Klosterman?' And they would say, 'Chuck Klosterman's a special case; essays of rock criticism don't sell.' And then a few years would go by and I'd be like, 'Well, what about Rob Sheffield?' And they would say, 'Well, he's a special case because he works at Rolling Stone.' And it's like, 'Well, I feel like my body of work connects with people, and don't people put out poetry collections all the time? Why do I have to be an old, dead, canonical man for my work to fucking matter?' The answer is, I don't. The book is going into its third printing and it's not out yet. I want to send a postcard to everyone who said it would be really hard, and be like, 'Oh yeah, for real, we've sold like 6,500 copies. And it's not even out for a month. That's not nothing.'

Jessica Hopper's  The First Collection of Criticism by a Living Female Rock Critic is out now. You can buy it here.