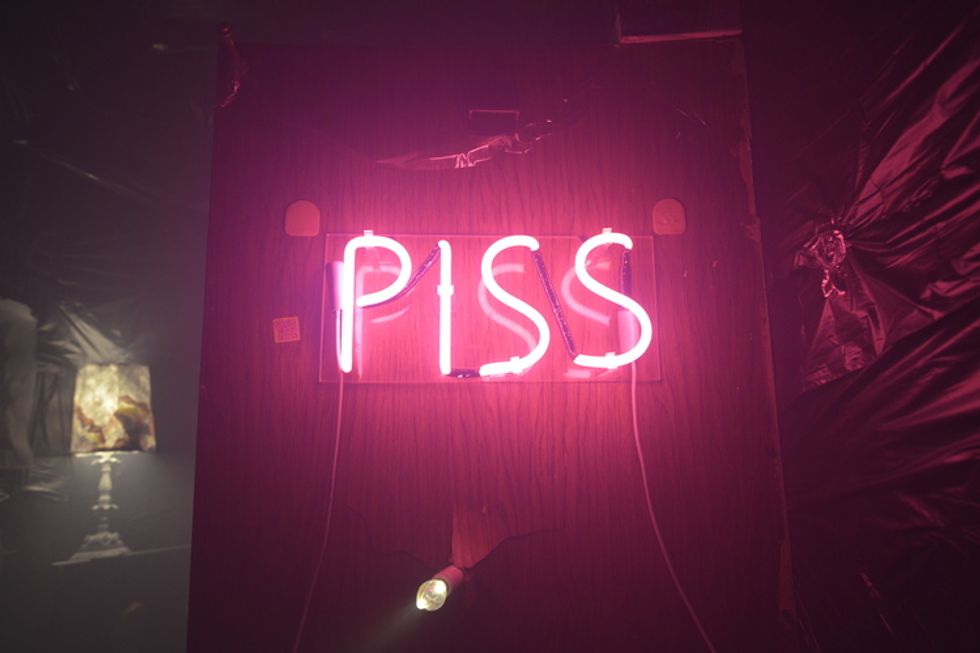 by Samantha Katz
PAPERMAG
(Photo courtesy of City Bird Gallery)
Walking into City Bird Gallery for the Bazaar Teens' latest show, "I Never Could Talk to You," feels a little like you've entered a cross between a murky side room at a Brooklyn rave and the smoky bathroom during a high school dance. The gallery is armed with an array of neon lights, lasers, fog machines, and tattered porn magazine clippings and appears totally unkempt, as if the show's installation was a complete after-thought. During the recent opening, a trash bin collecting empty cans of shitty beer stood in the center of the already crammed venue, a still-wet painting of Bill Cosby holding a gun and wearing a tiara laid on the floor near the door, and at one point a mass of clay broke off a hanging sculpture and rolled dead across the room.

Every which way you look, you'll find some haphazard spectacle: a baby-shaped cast made of weed lying in a mini coffin, a grimy mattress advertising the word "CUT" painted in large white letters, or a very cool wallpaper patterned with images from the Bazaar Teen Instagram feed are but a few of the works on display. Every inch of wall space is covered with black trash bags, enforcing an anti-white-wall model and a belief that a given work's installation is as important as the object itself.

(Photo courtesy of City Bird Gallery)
So, who are the Teens? The art collective, comprised of artists Randy Lee Maitland, Drew Van Deist, John Gordon Gauld, Dustin Yellin, Ellen Jong, Daniel Kent, Dave Sheinkopf, Ben Fain, and Eric Amling, among others, formed this past September, following a self-titled group show, "Bazaar Teens," held at 205A in the East Village. But basically, they're a bunch of trouble-makers and misfits worthy of their name. Their deliberately obscure communications in interviews and promo materials are riddled with misspellings and charades and most of them prefer to be addressed by pseudonyms.

Like their personas, the work itself is full of merry prankster vibes. Dave Sheinkopf's mobile app-controlled laser projection dispenses sheets of smoke and good-times, John Gordan Gould's series of photo-realist paintings detail an email chain from one of the show's drop-out artists, Dustin Yellin's interactive "Pick Up" landline phone haunts visitors with sounds of heavy breathing from the receiver, and Ellen Jong's neon pink "PISS" sign illuminates the room. It's a rainbow of chaos. And, much like being a teen, the whole experience is pretty awkward and slightly sexual. In other words, go see it before it closes on March 11th.

Bazaar Teens' "I Never Could Talk to You" will run through March 11 at City Bird Gallery (191 Henry St., Manhattan). And if you want more, check out the Teens' latest work at SPRING/BREAK Art Show, opening to the public on March 4, where they will be showing eight individual pieces made of shredded cash money (a cool $10k to be exact) in the name of art.