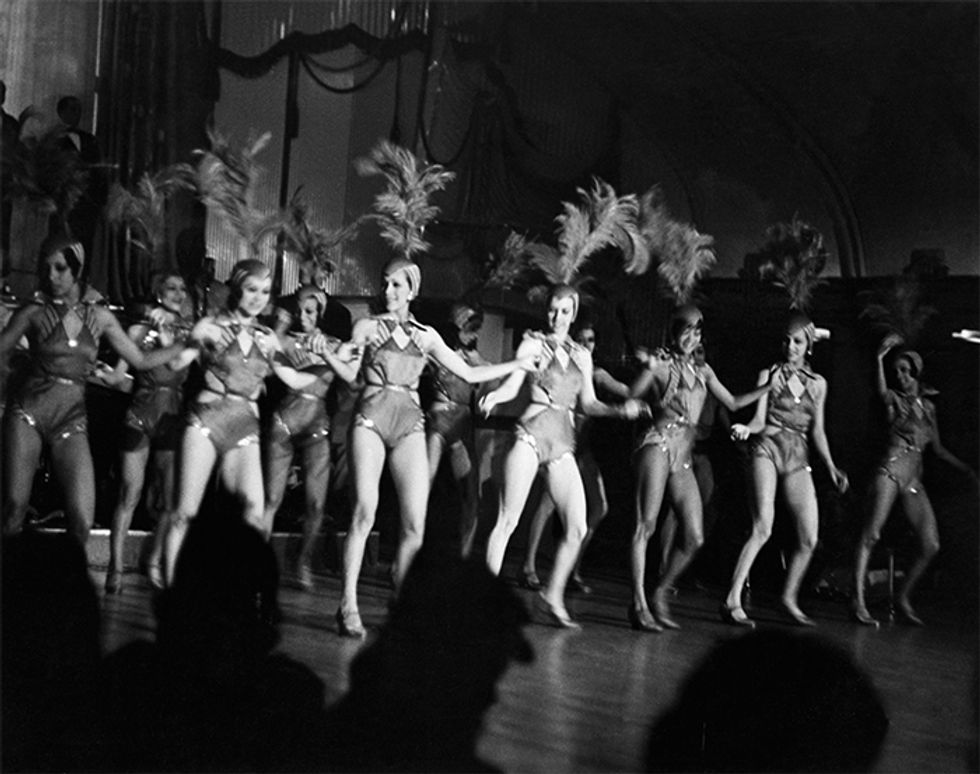 A Look at 100 Years of New York Nightlife: The Roaring Twenties

by Sean Michaels / as told to Abby Schreiber
PAPERMAG
In our October 'Nowstalgia' issue we're taking a look at 100 Years of New York Nightlife, tracing after-hours trends to their beginnings and analyzing the ways our nocturnal habits of the past continue to influence our habits of the present. Below, we kick things off with one of the best good-time eras the Naked City has seen yet: the Roaring '20s. Check back for future decades each day.
The Cotton Club / Â© Michael Ochs/Corbis

The 1920s era in nightlife was one in which you had to evolve or die. With Prohibition taking (legal) alcohol off the table, clubs had to be sexy and appealing enough that patrons would risk arrest to go. There were two categories of venues: the speakeasy that was operating and selling liquor illegally and then legal clubs that weren't (visibly) selling liquor and where patrons would come in with their own flasks and would pay covers and buy mixers.

Among the most popular places of the time was the Country Club, whose owner, Belle Livingstone, would always lounge around in red silk pajamas. The club featured live music, and had ping pong and mini golf within the venue. There was the Pirates' Den, which had marine paraphernalia all over the walls and waiters dressed up as pirates who every so often would stage sword fights while the guests would swill cider from mugs. They would also experience a mock storm every few hours where thunder sheets would rattle and lights would flash and water would be sprayed in the air. And there were Russian-themed establishments like Russky Medvied and Little Rumania across the road, with birch trees painted on the walls and Russian immigrants and ex-pats drinking tea and lemon and champagne and listening to balalaika music.

Then there was the 300 Club. A legendary speakeasy and the most exclusive of the bunch, it was famous for its owner, a demoiselle named Texas Guinan. The place had 20-30 tables and a small dance floor that enabled really close dancing, soft lighting everywhere, and walls covered in cloth with a pleated tenting up to the roof. It felt like you were in some sort of desert tent or a garden party, complete with hanging Chinese lanterns everywhere and pictures of parrots on the walls. But along with the dÃ©cor, the club was just as famous for its characters. There was Texas raking around, as well as Ethel, the woman who sold cigarettes, the lighting guy named Cohen, and four Spanish guitarists called the Castilians who would travel from table-to-table singing. The entertainment also included girls wearing almost nothing who would dance and sing and other revues - there'd be two a night, one early on and the other around 5am. To help keep the energy up, there were felt snowballs that patrons would use to get into fights and on every table were wooden clappers called "click-clacks" that you could smack around. If anyone fell asleep, some of the waiters had trumpets and would blow in their ears to wake them up. And all through the night, people would be throwing paper streamers so that by the time dawn came at this crazy bacchanal, people would be ankle deep in colored paper.

You had musicians like Duke Ellington and his orchestra, who primarily played at the Cotton Club in Harlem, and people like Benny Goodman and the Dorsey Brothers and Guy Lombardo and Cab Calloway. Of course, this period also included what would become known as the Harlem Renaissance and that neighborhood became an epicenter for jazz and nightlife with the Cotton Club and Smalls Paradise. Although it was ironic -- and unfortunate -- that many of these venues, including the Cotton Club, catered to an exclusively all-white clientele even though all of their performers were black. But even then you had community organizers and members of the intelligentsia intersecting with mobsters and drunks and dancers.

It was funny that the Depression started right before Prohibition was repealed. Now that there were no longer the constraints with alcohol that forced people to be creative, people were suddenly broke and the era had passed. It was a different time in the '30s, one that was less like the nightlife Wild West and instead more corporate. But there were still some lasting trends in nightlife culture that continued into the '30s, and that we still see today. With the advent of electricity and amplified music, people started going out late and staying out later and on the way home stopping by a Chinese restaurant for chop suey or a diner or automat for cheeseburgers and pie. And what was also special about this moment -- that's easy to forget when you're looking at it with a nostalgic lens --  is that these decades were also very focused on the future. With the domination of industry and new technologies, a lot of these establishments were awash in glass and chrome and neon lights. They were futuristic, not old-timey. It's not unlike what we see today in big EDM clubs with crazy lights and booming sounds. Nightclubs then, as now, were full of this exciting feeling of "right now, this very second, the present and the future are colliding."
You May Also Like
Care