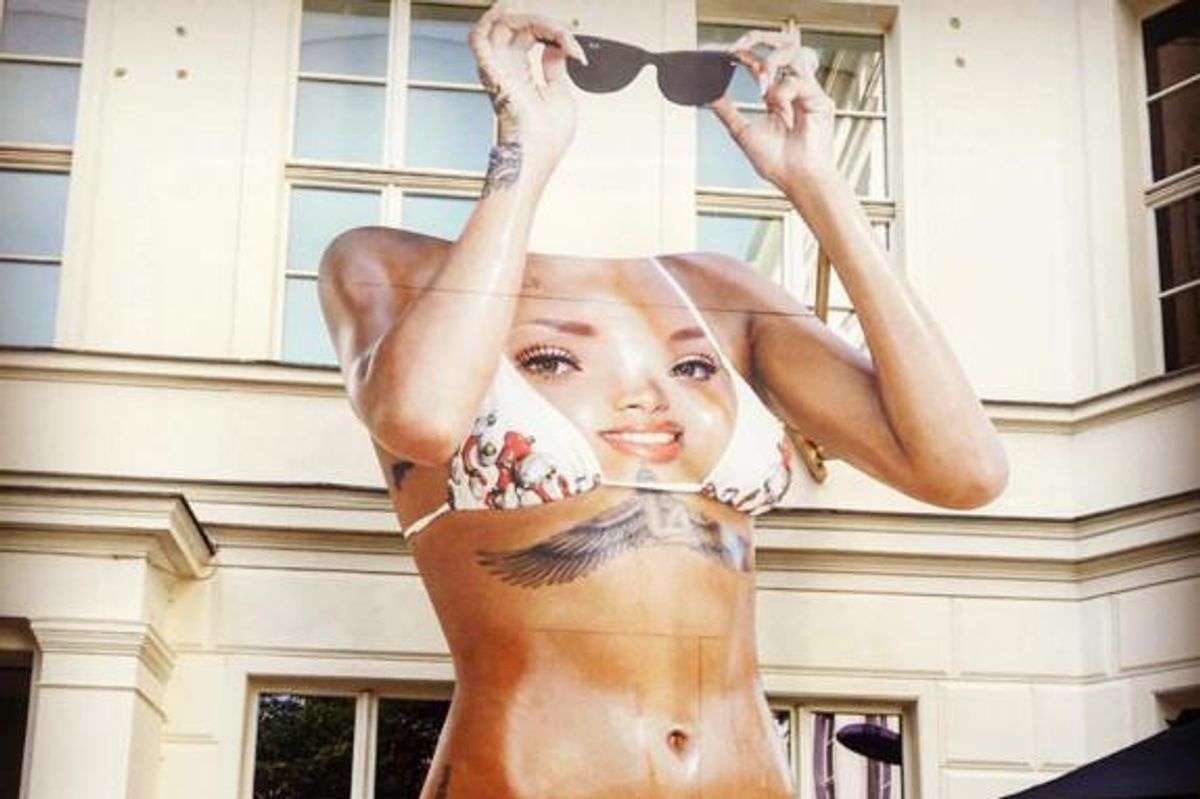 A Giant, Questionable Artwork Of Rihanna's Headless Body Is On Display In Berlin

In art news from the other side of the world, a giant cut-out of a headless Rihanna outside the Kunst-Werke Institute for Contemporary Art has apparently become the star of the Berlin Biennale.

A work by Colombian artist Juan Sebastián Peláez, it's dubbed Ewaipanoma (Rihanna). The piece, according to the Biennale's site, is a reference to drawings of "natives" created by 16th-century European explorers during their travels, primarily in the Caribbean and Central and Southern America. Peláez's work specifically references the "Blemmyae," a mythical group of headless people with faces in their shoulders and chest.

The piece itself is the latest in a larger series of cut-outs that feature the bodies of Caribbean/Latin American celebrities with digitally altered faces on their chests. Aside from Rihanna, Peláez's most well-known work is a headless cut-out of Miss Colombia 2014, Ariadna Gutiérrez, that was featured in this year's Spring/Break art fair in New York. These two particular works are disturbing on a level, in the sense that they key into a broader cultural tendency to abase women by reducing them to mere body parts (often explicitly by cutting off or hiding women's heads). However, what's more troublesome, is Peláez's entire series (which, to be fair, also includes soccer stars) equates the exploitation of modern celebrities with that of historically colonized peoples.

Because while contemporary culture does have a tendency to exploit celebrity via constant paparazzi harassment and trending tabloid stories, that's a pretty far cry from the historical realities of colonization. After all, celebrities are definitely "Other"-ed in the sense that they are often treated as objects in the public eye, but Frantz Fanon may take issue with comparing a millionaire celebrity's lack of privacy to having your ancestral lands pillaged by pox-carrying Europeans with guns.


But, hey, it makes a great selfie backdrop.