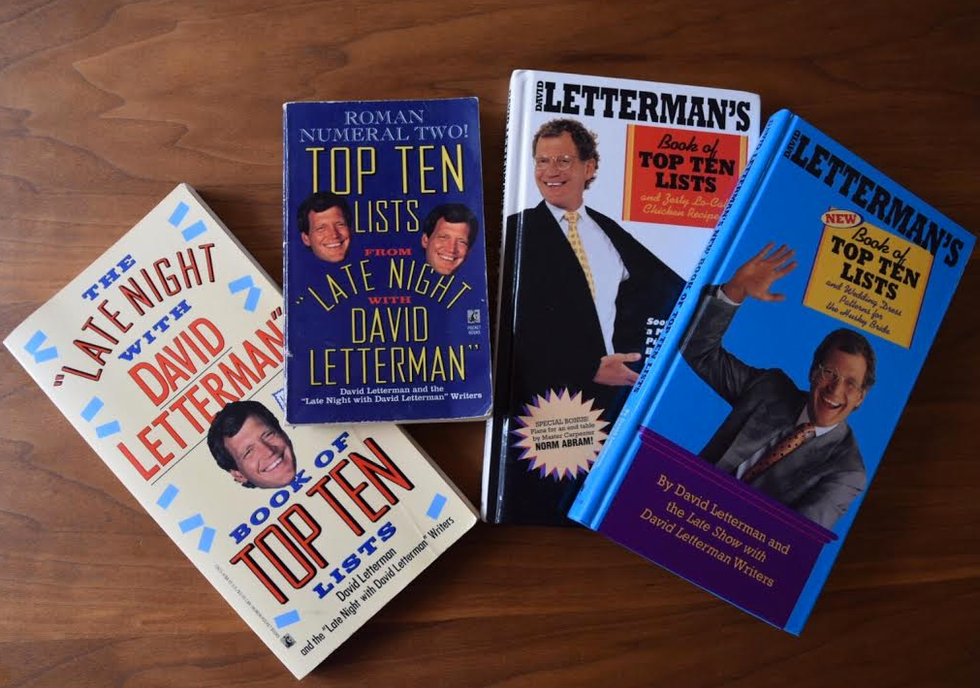 by Alex Scordelis
PAPERMAG
By now, your eyes are probably bloodshot from reading Letterman tributes, and here comes another one, of sorts. It's not an ode to the greatness of Letterman, but to his flagship comedy bit: The Top Ten list.

In just about every show for 30 years, David Letterman has delivered a Top Ten list. His nightly desk segment has served his show well as a vehicle for a quick onslaught of 10 concise jokes. Now, Letterman may not be the King of Late Night -- a hollow title that belongs eternally to Johnny Carson -- but with the Top Ten list, he launched the ultimate late-night bit. Carson had Carnac, Leno had Headlines, and Conan had In the Year 2000, but Letterman's Top Ten list is truly the king of talk-show desk pieces.

As a kid, I was too young to stay up and watch Letterman on Late Night, but somehow the books of Top Ten lists that his NBC show produced found their way into my hands. I obsessed over those books in grade school, memorizing the lists and passing off the jokes as my own -- as if my fellow fifth graders actually thought I was coming up with the Top Ten Serial Killer Pet Peeves (Number 2: "When you finally meet someone you really like, you always end up killing them") or the Top Ten Least Popular Christmas Gifts (Number 10: "Andre the Giant Champagne").

Letterman's books kicked off my status as a comedy nerd. And I wasn't alone. Throughout the '90s, Letterman's four Top Ten books (all best sellers) were ubiquitous in bathrooms across America. It was like toilet tanks came with a Letterman Top Ten book installed on top.

To this day, Letterman is pigeonholed as a broadcaster who only appeals to audiences on the coasts -- flyover country was solidly Leno -- but the simplicity and silliness of the Top Ten lists had a broad appeal. It doesn't take an intellectual to find the humor in the Top Ten Rejected Campbell Soup Slogans (Number 3: "Sure beats raw sewage"). On weekday mornings, local CBS news affiliates play Letterman's list from the night before (with the dirtier items edited out), as do morning-zoo radio shows and Sunday morning political talk shows. Some viewers bristle at the prickliness in Letterman's interviews or don't care for his opening monologue (something he ceded to Leno early on. Letterman never pandered during his monologue, and projected an "I have to tell these dumb jokes" attitude). But everyone understood the humor in his Top Ten lists.

Letterman's Top Ten lists connected with a mass audience, largely because it's the bit where his native Indiana charm shines through. There was always something folksy about how he announced that the list was coming from the home office in Sioux City, Iowa, or Wahoo, Nebraska, or another Midwestern city. Although there were plenty of lists that took jabs at the Jets or taxi drivers or Times Square, most of the jokes could connect with anyone, anywhere, like the Top Ten Rejected Commercial Characters (Number 3: "Greyhound Gus, the Bus-Riding Drifter").

When Letterman debuted the Top Ten list on September 18, 1985, Late Night had already been on NBC for three years. Watch the first list (Top Ten Things That Almost Rhyme With Peas. Number One: "Meats"), and it hardly feels like a bit that would become a staple of the show.

For a Letterman geek, it's thrilling to watch that clip, as he spends a minute setting up the segment, not knowing that he'll do it nightly for three decades.

In the late '80s, Letterman flirted with canning the Top Ten list and wasn't shy about expressing his distain for it with lists like Top Ten Reasons to Discontinue the Top Ten List (Number 2: "Complaints of drowsiness") and Top Ten Numbers Between One and Ten (Number 5: "Nine"). My dad, an armchair critic of the light-night shows, thought Letterman was making a mistake by doing the Top Ten every night. Why not do it once in a while, like Carson did with Carnac?

But at the dawn of the '90s, Letterman was a hot commodity, and so was the Top Ten. People magazine published an article in 1990 titled: "The No. 1 Reason David Letterman Keeps Reading the Top 10 List -- Well, It's Funnier Than His Monologue" and in 1991, the Reading, Pennsylvania's newspaper, The Eagle, ran an article saying that with countless rip-offs, Letterman had created a list-crazy culture. (Take that, BuzzFeed!)

In 1993, Letterman made the jump to CBS, and Top Ten list mania truly caught fire, even after NBC tried to block the bit due to intellectual-property law (a case that's still studied in law schools). As a 12-year-old, I was finally old enough to tune in at 11:30 and watch Letterman every night -- and I did. From his first list on the Late Show (Top Ten Ways the New Show Will Be Better. Number 8: "My new 'Rappin' Dave' character") to the countless celebrity walk-ons to deliver the list (like John Malkovich's Top Ten Things That Sound Creepy When Said By John Malkovich. Number 9: "I put my jammies on all by myself, Mommy!")

And even though Letterman admits that he willfully let social media pass him by, in 2007 he had one of late-night comedy's first viral hits after his Top Ten George W. Bush Moments played at the White House Correspondents Dinner.

In recent years, Letterman has pawned the Top Ten list off on guests he seemingly doesn't deem worthy of an interview: Survivor contestants, Heisman Trophy winners and the like. And Westwood One, the radio conglomerate, quietly stopped re-broadcasting the lists last year.

Despite his occasional disdain for the bit, Letterman was a master at using the list in important moments, like the time when Johnny Carson made his final TV appearance by handing Letterman the blue index card in 1994. Or in the difficult first show back after 9/11 on September 17, 2001 (Top Ten Things That Almost Rhyme With Hat. Number 9: "Hats").

Ultimately, Letterman's Top Ten list is talk-show equivalent of Barry Bonds coming to the plate. He didn't hit a home run every time, but you always stayed in your seat to watch
You May Also Like
Music