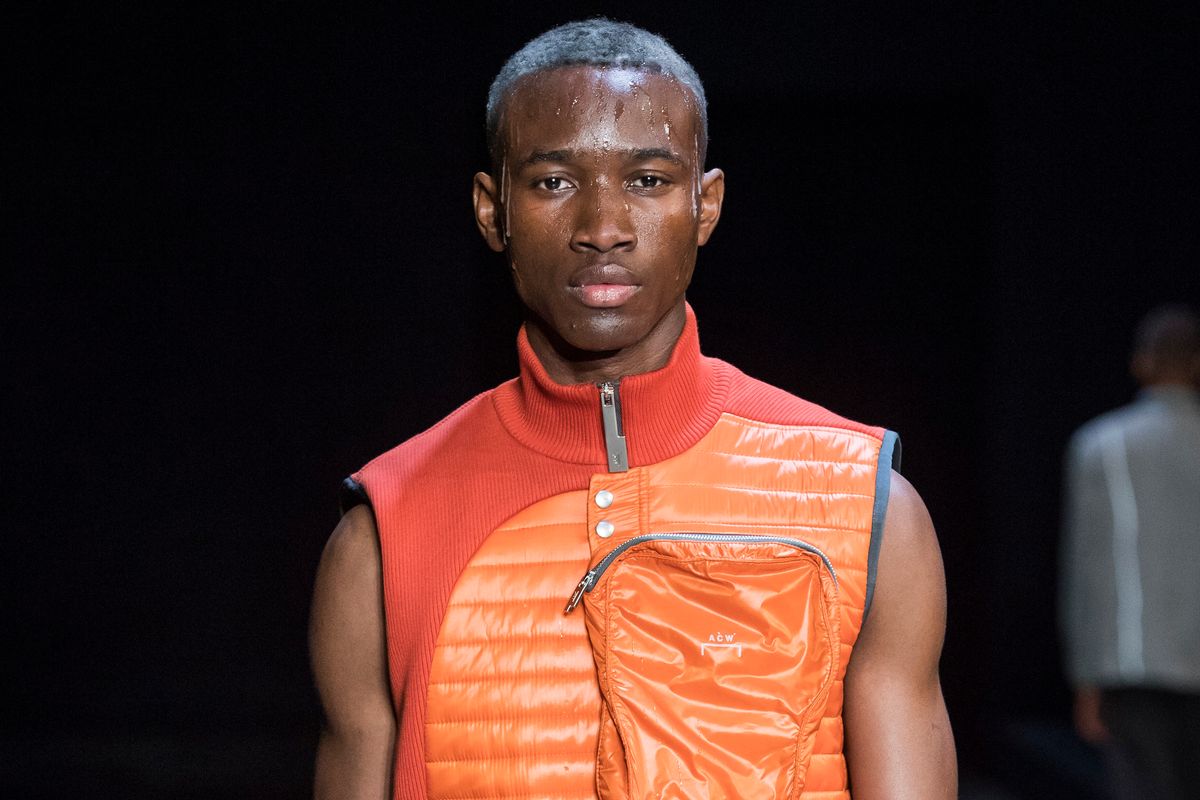 With the Netflix show Bird Box dominating all conversations this year (thanks to life-threatening challenges, viral memes, drag parodies, and some vital-in-2019 Kardashian support), the impending apocalypse is on everyone's minds more than ever. And that's really saying something considering the fraught Trumpian climate we've all been clawing through — bloody-knuckled — for years now.

So it's only natural that elements of survival seep into all corners of our culture, including fashion — a vehicle that, when successful, mirrors our society's fears and dreams through extreme stylized dramatization.

Ross presented his clothes in a blacked-out warehouse, while performers gripped life rafts in a pool of water. Models walked beside them with dripping wet faces and dirtied hair, occasionally stopping to look their way. A dog emerged at one point, viciously barking in their direction against a pounding soundtrack.

Like Malorie (Sandra Bullock) pummeling down the river to find a better life for Boy and Girl, millions of migrants in Europe crowd inside boats every year and embark on a deadly mission throughout the Seas. Many don't make it to their final destination — a serious crisis echoed in A-Cold-Wall*'s ominous attitude and practical silhouettes this season.

"The pool closest to the audience represents the pool of fear and preservation in the age of nationalism, the pool further away is the human pull to progression," Ross told The Guardian. "I was alluding to movement of people but also the depths of fear of a bottomless pit, and the bravery and the triumph that is required to move through to the future."

Life vests in safety orange were edited for contemporary streetwear, designed with tons of utilitarian pockets and zippers. Transparent rain coats were cinched at the waist, while puffers were styled with oversized scarves and fisherman hats. Functional compasses were sewn directly into garments, while allusions to direction, time and travel were printed onto several pieces. Tailored suits were fabricated using weather-resistant nylon, and subtle plastic accents appeared throughout.

As a literal — but still dramatic — display of protection, A-Cold-Wall* also created blue-tinted, jagged shields that were transparent and worn shirtless with nylon cargo pants. The plastic cascaded onto the ground, dragging behind the model like an evening gown's train, offering an intense, apocalyptic alternative to formalwear. Could you imagine if Trevante Rhodes had wore this as Tom in Bird Box?